A sweet deal for walkers and wildlife 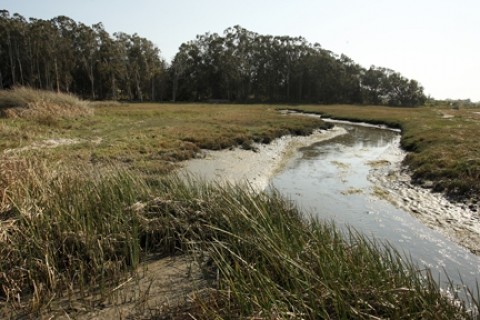 # The shimmering, windswept water at the edge of the estuary in Los Osos reflects a silver lining in the community's long-simmering sewer controversy: a valuable waterfront parcel looks set to become a permanent home for birds and wildlife rather than a housing tract.

Eight acres of open space along Ramona Drive--adjacent to the existing Sweet Springs Nature Preserve--is being purchased for conservation by the Trust for Public Land, after a proposed housing development failed to materialize on the sewerless site.

Known as East Sweet Springs, the gently sloping land will eventually be turned over to the Morro Coast Audubon Society, which owns the nature preserve next door. The group plans to create paths for public wandering by the bay, as well as restoring the native coastal dune habitat.

Framing a vista of the estuary and the sandspit dunes, the tall eucalyptus trees on the site chattered in the ocean wind on a recent spring day, their creaking branches scraping against each other in the salt air. Planted by pioneering entrepreneurs years ago, these scraggly trees nearly scuttled the deal.

Los Osos real estate developer and anti-eucalyptus gadfly Jeff Edwards, along with longtime resident Julie Tacker, threw a monkey wrench into the works last month when they appealed a county decision to create the parcel. The two criticized the local Audubon Society for failing to remove the non-native trees from the Sweet Springs Nature Preserve, calling the birding group's management of the adjacent open space "a dismal failure."

They also called for a water connection and a public restroom to be included as a requirement for the land deal.

County supervisors unanimously turned down the appeal in March, after hearing from a parade of Audubon supporters. But the process delayed the necessary grant funding for the purchase, throwing the deal into jeopardy. Compounding the problem, the appellants threatened to continue their fight by going to the Coastal Commission and eventually to court.

Conservation supporters--anxious to keep the deal alive after years of negotiations between Karen Frankel of the Trust for Public Land and landowner Kathryn Donovan--came to an understanding with Edwards and Tacker. The Audubon Society recently signed an official settlement agreement with the pair, specifying that a management plan will be prepared for the entire Sweet Springs property.

With input from biologists and arborists, the plan will come up with management options for the non-native trees and other plants.

"They want us to cut down all the eucs, but if we did that, there'd be nothing left, no perches for the birds. But we're gradually replacing them with native willows and oaks as they fall or die," explained Jan Surbey, president of the Morro Coast Audubon Society.

The society proposed removing 23 eucalyptus trees from Sweet Springs a few years ago, provoking such an outcry from the community that the idea was abandoned, she said.

The Audubon Society doesn't favor the idea of installing a restroom or portable toilet at this time, but will study the proposal as part of the agreed-upon management plan.

"That's a headache we don't need. We don't have the money. It's true, there aren't many public restrooms in Los Osos or Baywood Park. There's none at the Elfin Forest or the Oaks Reserve State Park. But we're a nonprofit, and we're not in the business of providing restrooms for the entire town," Surbey noted.

With the settlement agreement now in place, the state Wildlife Conservation Board will reconsider supplying grant funding for the land purchase at its meeting in May. Other grants have already been lined up from the U.S. Fish and Wildlife Service and the California Coastal Conservancy, adding up to a "fair market price" for the eight-acre parcel, according to Surbey.

Once the Trust for Public Land turns over the title to the Audubon Society, the group plans to hold a public workshop sometime this summer.

"We want to engage the public on what they'd like to see, how we can complement Sweet Springs with the new property," explained Trevor Keith, the society's land committee chairman. A trail plan will also be developed to allow public access without trampling sensitive species.

"If 500 people want a restroom, we'll look into it, if we can get water and it's feasible. A lot of steps are needed," Keith said.

"We'll work with scientific specialists to make sure we're managing the land on behalf of the threatened and endangered species that never make it to the scoping meetings. The management plan will be based on science, not on people's demands." he added.

"It's been a very long and complicated process. But it's onward and forward now."