A tale of two cities

# Maybe you remember Jill Cohn, the raven-haired, Seattle-based singer-songwriter who used to stop through SLO County regularly during her West Coast tours. The piano-playing chanteuse has a lush and lilting voice that reminds many listeners of the likes of Tori Amos, Sarah McLachlan, or Jewel.

Cohn fell off the map a while ago, but recently resurfaced with a new album, her eighth independent release perhaps her most assured recording to date which was inspired by a hiatus in Mexico.

Every Street Inside of You Mexico City is the culmination of an inspirational stay south of the border. After suffering through a year-long writer's block, Cohn decided one day that she needed a change, so she packed her belongings and headed to Mexico City. She found a sublet on the Internet. She didn't speak the language. She just showed up and started to live a new life, which in turn has breathed new life into her songs.

The CD was produced by Ethan Allen (whose credits include producing Kristin Hersh and Graham Rabbit) and Jim Watts (who worked with The String Cheese Incident and won a Grammy for his work with Emmy Lou Harris). These new piano-driven songs are richly inhabited worlds of their own, dripping with honesty and emotion. Mexico has clearly been good for Cohn.

Coolest of the cool

Charlie Musselwhite is a rare breed. He was one of the few non-black bluesmen to come to prominence during the 1960s blues resurgence. Born in the hill country of Mississippi, he supported himself by digging ditches, laying concrete, and running moonshine in a 1950 Lincoln (big trunk, in that car!).

# He eventually headed north to Chicago along Highway 51, the so-called Hillbilly Highway, where he hoped to land a factory job. Instead, he fell in with Chicago blues greats such as Muddy Waters, Junior Wells, Sonny Boy Williamson, Buddy Guy, Howlin' Wolf, Little Walter, and Big Walter Horton.

His career has sparkled ever since, and just last year he was the big winner at the 28th annual Blues Music Awards, walking away with four of the five trophies he was nominated for, including Album of the Year (Delta Hardware), Song of the Year (Church is Out), Traditional Blues Album of the Year, and Instrumentalist Harmonica.

Charlie Musselwhite returns to Downtown Brew for a one-night engagement to play hits off of Delta Hardware. See him on Friday, April 11, at 7 p.m. Advance tickets are $16 at the venue and Boo Boo's or $18 at the door.

Song of the sirens

A bevy of talented musical beauties will provide entertainment during Rockin' Women Raising the Barn for the Surfrider Foundation on Saturday, April 12, at the Cayucos Creek Barn (1155 Cayucos Creek Road). 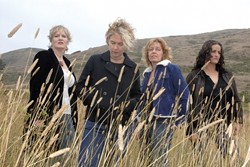 # Canyon Winery, and other local wineries will be sold at the site. Local artists from all over the county will sell paintings, photography, jewelry, textiles, and more donating profits to Surfrider's efforts.

Blame Sally's Pam Delgado (who used to live around here), Renee Harcourt, Jeri Jones, and Monica Pasqual have been playing and recording together since 2000. They have released three CDs since 2001, including last year's popular Severland.

Jill Knight is a local favorite. Born in South Carolina and raised on an island just off of Savannah, Ga., Knight's soulful sound has been captured on two CDs, including Future Perfect that debuted in 1999 to stellar reviews.

Lindsay Tomasic is an L.A.-based singer-songwriter who creates acoustic music that's fun, makes you laugh, and makes you think. Her new live studio album, A Slice of Life, was just released.

Tickets are $20 in advance and $25 at the door. Children's tickets (6-17 years) are $5, and kids younger than 5 get in free. Advanced tickets can be purchased at www.brownpapertickets.com/event/28159.

More songs from the gentler gender 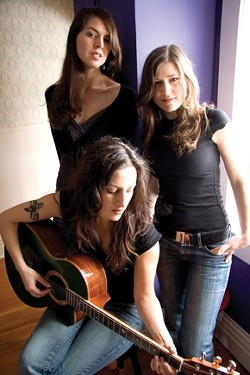 # An evening of female folk singer-songwriters is scheduled for Saturday, April 12, at the Cohan Center at 8 p.m.

Amilia K. Spicer will be backed by her driving L.A. band, and her voice is often described as haunting and ethereal. General public tickets range from $28 to $34. Call 756-2787 to order.

Reggae, soul, and hip-hop juggernaut Dread Daze plays the Frog and Peach on Friday, April 11. The L.A.-based ensemble is multi-racial and multi-cultural, filled with members who bring their forward-thinking, socially conscious beliefs to their music. Harmony vocals and burning brass lines separate these guys from the crowd. Check them out on myspace.com/dreaddaze.

# On Saturday, April 12, Downtown Brew presents the Surf's Up Party with Still Time, The Arch Dukes, Fighting Chance, and The Weather Underground. The 8 p.m., 21-and-older show costs $10 advance or $12 at the door.

Cuban jazz guitarist Pablo Menendez plays Sunday, April 13, at 7 p.m. at the Cuesta College Student Center. Menendez is a Grammy nominee and founder/director of the band Mezcla, which appeared last month at the 2008 Havana International Jazz Festival and toured extensively throughout Cuba, the Caribbean, Europe, and South America. His music has been described as funky Yoruba, Afro-Cuban, salsa, bebop fusion, and he counts among his many fans Carlos Santana and Bonnie Raitt. Tickets are $15, or $12 for Jazz Federation members, and $7 for students, and are available at Boo Boo Records or at the door.

N.Y.C. vibraphone star Mark Sherman is the next guest to perform at the Famous Jazz Artist Series at the Hamlet in Cambria on Sunday, April 13, at 4 p.m. ($15), and 7:15 p.m. ($12) or see both for $20. Heralded as one of the East Coast's most prominent vibes players, Sherman has appeared and recorded with a wide variety of major artists in the jazz and classic pop fields think Wynton Marsalis, Joe Lovano, Peggy Lee, Lena Horne, and Mel Torme. Call 927-0567 for reservations.

The San Luis Obispo Wind Orchestra will present a musical blowout for the Beacon Resurrection Celebration on Sunday, April 13, at 3 p.m., in the newly rebuilt SLO United Methodist Church.

On Sunday, April 13, one of the hottest female reggae artists currently working, Dezarie, will appear in concert at Downtown Brew. This roots empress recently released Gracious Mama Africa, which has been garnering great press as well as fan kudos. Also see local female-fronted bands Mrs. Brown and the Dub Smugglers and The Kicks. This 18-and-older show costs $16 advance or $18 at the door.

Tucson singer-songwriter David D'Alessio and Irish-based songwriter-producer Kelley Dolan play the Frog and Peach Pub on Monday, April 14, as part of their West Coast tour. Dolan produced D'Alessio's latest release, Songs to Undress Your Ego and will also be formally releasing her record, Molly Ozone. Expect the two to pool their musical talents of piano, guitar, clarinet, and vocal harmonies to back each other. The show starts at 8 p.m.

Premier psychobilly band Nekromantix plays the Downtown Brew on Wednesday, April 16, in support of their album Life is a Grave and I Dig It!!!. Tickets are $13 advance (16 and older can attend) or $16 at the door.

Buy your tickets for Lura! 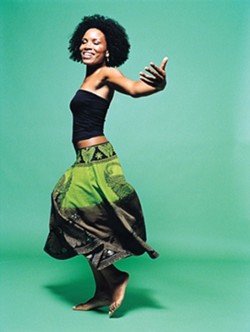 # International singing sensation Lura based on Cape Verde, an island off the coast of West Africa brings her beguiling sounds to the Spanos Theatre on Thursday, April 17, at 8 p.m. The sultry, street-wise singer mixes urban sensuality with a passion for the traditional Africa island sound. Rolling Stone magazine gushed, In Lura, Cape Verde has a beautiful face and a steely, seductive voice to represent its traditions.

In the poems and lyrics of Cape Verde, we speak a lot about immigration, Lura explained in her press materials. A lot of people move away to make a better living. We talk a lot about rain because there is so little rain. And we talk about food, because sometimes it is very difficult to get food. A lot of things you have to buy from outside from Portugal, the U.S., Holland. And we talk about the relationship between parents and their children, because so many families are far apart.

Tickets are $28, with student discounts available. Buy them at the PAC Box Office or by calling 756-2787.

# With Anton Newcombe, the main instigator in the volatile collective known as the Brian Jonestown Massacre, it can be difficult to separate the genius of the man from the over-amplified myth. He practically claims to be the second coming in terms of pure musical talent a claim that can instigate a rain of rotten tomato to be launched. But listen to any of the over a dozen releases (more if you count small-batch self releases), and you'll realize he's on to something. Anton is a brilliant, crazed, musical auteur and his new album, My Bloody Underground, continues a discography that glorifies the mind-altering psychedelic blues of the Rolling Stones at its filthiest and most experimental. Bring Me The Head Of Paul McCartney… spaces out for six-minute while Anton free-associates with a Robert Smith inflection, and Just Like Kicking Jesus is swathed in so much feedback and echo as to resemble the world heard inside a cottony cocoon. This is a hypnotic, free wheeling listen.

# Continuing with the soaring cinematic and synthesized elegance of 2005's Before The Dawn Heals Us, Anthony Gonzalez's M83 project now appropriates a large slice of 80s synth-wave and recycles it to gorgeous effect for Saturday = Youth. Whether it's the ethereal nature Cocteau Twins-inspired Skin Of The Night or upbeat New Order techno of Couleurs, M83 seems enraptured with the Regan/Thatcher era of sound coming out of underground radio. Building tracks around undulating layers of guitars and synthesizers, you'll be mesmerized by the level of melodrama contained within these songs. Highway Of Endless Dreams opens with a bit of acted dialogue and proceeds to build to an apex of sound you could swim in. Ending the album with the eleven-minute lush ambient soundscape Midnight Souls Still Remain, Anthony Gonzalez has mastered the ideal of an album: crafting a unified expression of sound and theme. A note-worthy release.

Glen Starkey never drinks and drives because he's afraid he might hit a bump and spill his drink. Commend him at gstarkey@newtimesslo.com.