A tale of two jails

The physical distance between the California Men’s Colony (CMC) and the San Luis Obispo County Jail is little more than the four lanes of Highway 1 between Cuesta College and San Luis Obispo, but there are drastically different worlds behind the facilities’ respective tall walls and barbed wire. 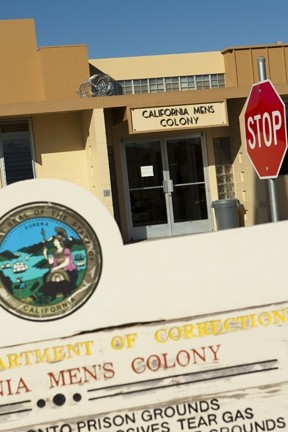 CMC was originally designed to hold 3,884 low- to medium-risk inmates serving extended sentences for serious felonies. By adding a second fold-up bunk to each cell, administrators have been able to stretch the housing capacity to 6,500. When there’s a body in each bunk, the men share just enough floor space to stand in front of a common toilet. Prisoners are able to spend most of the day outside of their cramped quarters, either working in factories or roaming surprisingly free in large yards with baseball diamonds and basketball hoops.

Guards are on hand to direct movement, conduct regular prisoner counts, and suppress any violent outbreaks, but the inmates essentially operate CMC themselves. They cook and serve the food, make the clothes, and even carry keys to their own cells so they can secure personal items from theft while they’re out. On a recent tour, one inmate told New Times conditions were “not ideal, but we make it work.” Another said simply, “I’m surviving.” All in all, the prisoners seemed calm and complacent, more bored than miserable.

“CMC is pretty fortunate,” said Lt. Dean Spears, the public information officer who led the tour. “There’s not a lot of violence here. Most of our population is over 40. They just want to stay out of trouble and avoid getting transferred.”

Spears said superior medical facilities, vocational training, and a kitchen that serves freshly cooked food instead of the prepackaged meals common at other prisons combine to make CMC a preferred institution among inmates, which in turn makes them more agreeable and easier
to control.

State budget reports show that spending on correctional facilities has been reduced by 11 percent since 2008, but Spears maintained that staffing and inmate populations at CMC have remained stable and that cuts have mostly impacted educational programs for prisoners. College and art courses have been eliminated, but general education development is still available.

“I’ve been at this job for 15 years, and I’ve never seen morale so low,” he said. “[Guards] are worried about their future and their retirement.”

Gee said that while staffing seems sufficient on paper, there are roughly 50 officers missing from rounds because they’re nearing retirement and using accrued vacation leave while they still can.

Spears said the budget provides for the 50 positions, but that it takes 16 weeks to train replacement officers.

In the meantime, other guards have to pick up the slack with involuntary overtime, earning sick leave and more vacation time that they can’t use and currently aren’t allowed to exchange for cash. State law requires a minimum ratio of one guard for every 100 inmates.

“No one dreams of becoming a prison guard when they grow up,” Gee said. “You do it for the stability and the benefits. We just want to be treated fairly for the job we agreed to do.”

With 30,000 members, CCPOA is the state’s second largest public union. The group endorsed Gov. Jerry Brown in his 2010 campaign for office and recently negotiated a contract with him that includes a 4 percent pay raise and would allow guards to cash in unused vacation hours. As of press time, the contract was still pending approval by the Legislature and ratification by the union.

The state Legislative Analyst’s Office told New Times the pay increase would cost California $90 million, and said it’s impossible to estimate how much vacation time might be exchanged for cash. A representative said their members currently have $600 million worth of time accrued.

Those concessions would offset $2.3 billion in estimated savings realized with the passage of Assembly Bill 109, a law that would ease overcrowding in state prisons by assigning lower level offenders—those with sentences of three years or less—to county jails. Existing laws limited a stay in county jail to one year. Though Brown signed the bill on April 5, AB 109 won’t take effect until adequate funding can be funneled from state to county coffers.

In addition to freeing up space, the Legislative Analyst’s Office estimated the change will save the state $2.3 billion.So the prison is overcrowded, but there’s room at the place across the street. Problem solved, right?

During a recent New Times tour of the county facility, 13 men and six women were sleeping on mattresses on the floor. If AB 109 is fully implemented, officials expect to see the daily population increase from roughly 600 to 730 inmates. They’ve already secured a grant from the inmate welfare fund to install a second round of bunks in many of the cells. The women’s jail is already at double capacity, but construction is scheduled to begin next year on an extension that will
ease overcrowding.

“When it’s like this, you learn to stay quiet or get yelled at,” said one of the women. “You got to stay in a little bubble on your bed.”

Compared to the dull drudgery of the state prison, the county jail is a mad house. It’s the first stop for any arrested citizens, whether they were caught driving drunk or robbing houses. On the recent tour, many were loud, some were mentally ill, others were detoxing, and everyone seemed a little stir crazy.

Considering such a diverse and agitated population, Kinitz said it’s vital to have spare beds so guards can find the best spot for inmates and separate any who don’t
get along.

The “yards” at the jail are small and barren, with bits of sun shining through slits in the grated ceiling. Detainees are only allowed three hours in the yard per week—that’s far less than their counterparts at CMC. They spend the rest of their days behind bars. The limited yard time is understandable considering most inmates serve only 10 to 20 days at the jail, but that average will rise with extended sentencing.

David Helwig, the jail’s mental health therapist, said demand for jail cells could be reduced if legislators invested in support services in the community.

“You absolutely get a return on your investment,” Helwig said. “It costs more to house them here than to keep them out of jail.”

Since 2008, the state has cut 31 percent of its mental health budget. SLO County has cut 24 percent from drug and alcohol services since 2007.