A tale told by an idiot

Unchecked ambition can lead a man to do strange and horrible things. In Shakespeare’s Tragedy of Macbeth, the titular character murders a benevolent king, his own best friend, and an innocent family so he can sit atop the throne. It’s a dark, damning, and disturbingly accurate critique of human nature and the willingness to set morality aside in order to pursue power and wealth.

In the case of virtuoso voice actor Rick Miller, the ambitious actions were decidedly less horrible, but they were still a bit strange—cartoonish even. It all started with a bit role in a small production of the same regicidal play.

“You don’t get much of a chance to shine as Murderer No. 2 [in Macbeth],” Miller explained in a phone interview with New Times.

The young actor wanted more spotlight, so he essentially “killed” the other 18 characters in the play and assumed their roles for himself. To Miller’s credit, it was kind of an accident, and The Simpsons helped.

It was 1994, the height of Simpsons mania, when Miller put on an impromptu performance at a cast party using spot-on impressions of Homer, Marge, and Flanders in a scene from the play. It was a hit. The other actors encouraged him to refine the routine and take it to the Montreal Fringe Festival, where a low-budget act could get plenty of exposure.

His success in Montreal allowed him to form his own company, WYRD Productions, and take the show on tour.

“I tend to stick with things for a long time, to re-work every aspect until it’s ready to tour,” Miller explained. “MacHomer’s become this multi-media extravaganza, but it’s still the same stupid joke.”

A lot of the humor is derived from the simple pleasure of hearing the revered, Victorian language in the drunken voice of Barney Gumble or the polished tones of Troy McClure. Miller includes as many voices as possible, often splitting a single role among several characters to allow 50 Springfield residents on stage. Patty, Thelma, Skinner, Moe, and the Sea Captain all take turns as witches, for example.

“It takes intense practice to use Shakespearean language in your own voice,” Miller said. “Switching back and forth between all these voices is basically 75 minutes of abuse on my throat, but impressing people is a big part of the show’s appeal.”

Still, MacHomer is much more than Simpsons characters reading an old script. It’s been revised to include songs and gags, and the casting choices add new elements to the play. 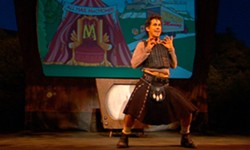 Miller described Homer as the stupidest Macbeth to ever grace the stage. He forgets his lines, blunders about, and gets distracted. Where Macbeth was haunted by visions of a bloody dagger, the dripping, wedge-shaped implement reminds Homer of a piece of pizza. Homer’s buffoonery seems a drastic departure from the determined but guilt-ridden Macbeth, but there are similarities between the two characters.

Both are prone to fits of violence, and both crave material comfort. The idea of lording over a castle with servants ready and willing to whip up a fresh batch of pork chops at 2 a.m. is a sentiment that suits Homer just fine. He just wouldn’t want to work for it.

“[The Simpsons] is so well written. It’s almost tragic how pathetic all the characters are,” Miller said. “It’s joke after joke, but tragedy peeks through, as do bouts of eloquence and heroism.”

While themes of vaulting ambition, fate, and guilt are impossible to remove from the story, Miller freely admits that MacHomer is not the ideal adaptation for those seeking to explore the psychological depths of Macbeth. Instead, this production is geared more toward making people laugh and introducing Shakespeare to a generation of young people who often aren’t that eager to embrace the bard.

“A lot of people say they hate Shakespeare, but they quote him every day,” Miller said.

Shakespeare’s influence on Western culture—even worldwide culture—is difficult to overstate. It’s been 400 years since he died, but his plays are still performed in multiple languages on stages across the globe and have been retold and referenced in countless novels, movies, and, yes, cartoons.

The bard literally invented swagger—not the style, per se, but the actual word “swagger.” It didn’t exist prior to the penning of A Midsummer Night’s Dream. According to shakespeare-online.com, the playwright added a staggering 1,700 commonly used words to the English lexicon by routinely repurposing old words as new parts of speech, linking words with hyphens, adding prefixes and suffixes, and simply making things up as he wrote.

“You listen to kids talk today, and it’s mostly, ‘like, you know, and stuff,’” Miller said. “If they’d read some Shakespeare, they might add a few words to their rosters.”

Or they could just watch TV. Oddly enough, no one has continued Shakespeare’s tradition of redictionalizing like the writers of The Simpsons, who created succinct and precise expressions for anger (d’oh!) and indifference (meh) which can now be found in legitimate dictionaries. The show has also given us less common, but perfectly cromulent words, such as “embiggen,” “craptacular,” “sophistimicated,” and “neighborino.” The list goes on, hilariously, at simpsons.wikia.com/wiki/Made-up_words.

Despite rave reviews from the L.A. Times, the New Zealand Herald, and more, Miller has encountered some criticism from people who shudder at the thought of hearing Shakespeare’s immortal words dragged through the mud of crude cartoons. They believe that high art should be placed on a pedestal, admired for its superiority to popular rubbish, and kept unchanged. Miller disagrees.

“People treat Shakespeare’s work like it’s holy. They forget that he was the ribald pop culture of his day,” Miller said. “The spirit in the room during MacHomer is probably a lot more like the Globe Theatre than what you see at most plays today.”

Calendar Editor Nick Powell plays the saxomaphone while jumping on the trambampoline. Contact him at npowell@newtimesslo.com.