A ton of live music descends on SLO County

Let me apologize in advance to anyone who sent information about a show I didn’t have space to cover this week, but there’s so much going on, it’s nuts! 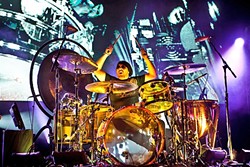 Jason appeared with his dad in the film The Song Remains the Same, where he drummed on a small kit. He joined his first band, Airrace, when he was 17, later joining Virginia Wolf and recording two albums. After joining Zep guitarist Jimmy Page on his Outsider album and tour in 1988, Jason was invited to play with the three surviving Led Zeppelin members when they played Atlantic Records 40th Anniversary Concert that same year.

Said Jason in press materials, “It’s part storyteller, with using the multimedia screens and things, we’re creating little pieces which I will narrate over, which give some little background over some songs we play—and the reason why I’m playing them. There’s stories of myself growing up with dad and how Zeppelin has been, y’know, part of my life from the beginning.” 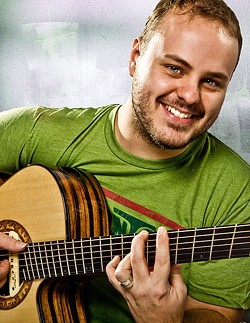 As if they’re willing summer and the winery concert season to come, the Good Medicine crew has teed up a ton of great shows in the North County vineyards starting this Friday, May 13, with The Coffis Brothers at Tooth & Nail Winery (5 p.m.; free). Playing rootsy rock ’n’ roll from the Santa Cruz Mountains, songwriters Jamie and Kellen Coffis were clearly inspired by their childhood heroes, Tom Petty, Neil Young, and The Beatles.

Unique acoustic artist Andy McKee plays this Saturday, May 14, at Treana Tasting Cellar on his The Next Chapter Tour (6:30; all ages; $25 presale at ticketfly.com and Boo Boo Records, or $30 at the door). McKee can make his guitar “approximate the polyrhythmic interplay of a percussion ensemble, the harmonic sweep of a string section, the dazzling runs of a bluegrass doghouse bass-and-banjo duo, and virtually anything else his pastoral compositions and tasteful covers require,” according to his bio, which said it better than I could. He’s a real virtuoso, using unusual tunings and a two-hand tap technique on strange-looking instruments specially created for him. His playing is so unique, it’s not even hard to believe he’s self-taught: He’s a musician who found his own way to make music.

Mark your calendar for a Tooth & Nail hat trick when Good Medicine & Co. bring three great performers to the venue over three days starting Thursday, May 19, with amazing country songwriter Phil Vassar (6 p.m.; 21-and-older; $30 presale at ticketfly.com or $35 at the door). 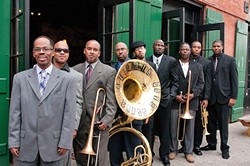 Now in its third year, the SLO Jazz Festival just keeps getting bigger and better, and I just checked the weather for this Saturday, May 14, and SLO Mission Plaza should be 77 degrees and sunny! Of course, since this daylong festival runs from 11 a.m. until 10 p.m., you may need a sweater as the sun descends.

There’s really too much going on to list everything since there’s a Broad Street Stage that features music between the Mission Stage headliners, not to mention the Youth in Music Stage in the SLOMA (details at slojazzfest.org; $40 general admission tickets at Boo Boo Records, vallitix.com, or by calling 888-825-5484), but let’s look at the headliner lineup:

Steve McCann & His Jazz All-Stars will present A Tribute to Tony Bennett & Frank Sinatra from 11:40 a.m. to 1:10 p.m. Expect great jazz standards made famous by these two paragons of vocal jazz, sung by McCann, known as “The Voice of L.A.” 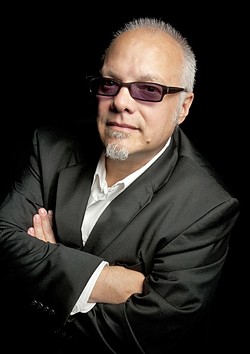 Grammy Award-winning percussionist Airto Moreira & Eyedentity, featuring Diana Purim, will display their incredible improvisation skills as they delve into Afro-Brazilian, samba, funk, and jazz fusion from 4 to 5:30 p.m. Airto’s recorded with the likes of Miles Davis, Weather Report, and Chick Corea. Purim, his daughter, is on vocals. Expect some incredible stuff.

Grammy-nominated Pete Escovedo Latin Jazz Orchestra will continue the percussive genius on display, concentrating on smooth jazz, salsa, and contemporary sounds from 6:30 to 8 p.m. He’s played for President Obama at the White House twice! Good enough for me.

And the party will close with a second line bang when New Orleans-based Grammy Award winners the Rebirth Brass Band plays from 8:30 to 10 p.m. This is old-school NOLA-style music straight from the streets of Treme. As Flea of the Red Hot Chili Peppers noted, the group is “unbelievable, hard as hell, free as a ray of light. There’s not a band on earth that’s better. Stunning.”

“We believe this is our most exciting lineup yet for SLO Jazz Festival,” organizer Scott Andrews said. “Fast becoming one of the top attractions in SLO County, we pride ourselves on bringing international quality jazz to the Central Coast, and showcasing regional and local Central Coast jazz stars in our growing jazz festival.”

It’ll be a beautiful day in the plaza!

I’m a sucker for old-school R&B complete with back-up singers and horns, which is why Alligator Records recording artist Curtis Salgado and his new album The Sweet Lowdown is right up my alley. The award-winning soul, blues, and R&B vocalist-harmonicist-songwriter will celebrate the April 8 release of his new album with a live performance at the SLO Vets Hall this Saturday, May 14 (8 p.m.; 21-and-older; $25 at the door).

Salgado’s new album has one great song after another, all but one penned by him and one of his rotating list of collaborators. “My heart and soul are in this,” he said of the new album in press materials. “I worked my tail off and let the songs lead the way. I wanted to write memorable songs with strong melodies that stick with you, and that’s what’s here.”

Did you know Salgado was befriended by John Belushi in 1977 when he was in Oregon filming Animal House, and that Salgado’s performances as well as his record collection and advice helped transform John Belushi into “Joliet” Jake Blues of the Blues Brothers? After the success of the SNL Blues Brothers skit, Belushi released the best-selling record album (which was dedicated to Curtis) and The Blues Brothers motion picture (Cab Calloway’s character was named Curtis as an homage).

Salgado also co-fronted The Robert Cray Band before heading off in his own direction and recording nine solo albums. The man’s got a powerhouse voice and tons of charisma spanning a 40-year career!

This is a great new album and I suspect this will be an amazing live show. Local blues powerhouse Guy Budd and the Gypsy Souls with incredible vocalist Inga Swearingen will open the show.

The little station that could!

This Friday, May 13, come out and support an old-school radio station, you know, the kind with live DJs spinning records and taking requests and talking right to you, the listeners.

The second annual Fundraiser Bash for 97.3 FM The Rock is scheduled for 6 p.m. in the Morro Bay Vets Hall (free; all ages; bring an ID if you want to buy beer from Firestone Walker), and they’re trying to raise enough money for operating costs for the all-volunteer community radio station.

“Our goal is raising a total of $14,000 (or more) by the close of the May 13 event through sales of libations, smart looking 97.3 T-shirts, and your donations,” wrote the station’s DJs in an email. “As of today, we’re shy just $2,590 from our goal of one year’s $14,000 funding to keep our one and only community radio station on the air. Music licensing, transmitter maintenance, insurance, and repairs must be met or we go dark. Commercial-free 97.3 The Rock is staffed entirely by volunteers. We humbly request your tax-deductible donations of $5, $10, $20, or whatever you can afford. Of course, more is better.”

If you can’t make the show or donate in person, go to EsteroBayRadio.com and click the “DONATE” button. Keep local radio alive, Morro Bay!

Awesome Western swing act The Carolyn Sills Combo plays Frog and Peach this Thursday, May 12 (9 p.m.; 21-and-older; free), just a couple weeks before their new album, Dime Stories Vol. 2, is set for release on May 27. This band is a 2016 Ameripolitan Music Award Nominee for Western Swing Group. Yippee-kai-oh!

You can soak up some music and hot mineral springs when Franklin Hot Springs hosts Folk-n-Soak, the first folk music festival and camping event at the Paso destination. The fun starts at noon on Saturday, May 14, and continues until noon on Sunday, May 15, and it costs $10 if you want to come and not camp, $20 for tent camping, or $30 for RV camping (there are only five electric hook-ups, FYI). Sorry, but dogs and hard alcohol are not allowed, but it’s BYO beer and wine (no glass)! Performers include The Christopher Hawley Rollers, Anthony Roselli, Janine Rose, Sky and Kat, Lantz Lazwell, Cindy Kalmenson, and lovemando. This is going to be historic! Find the event on Facebook under “FolkandSoak.”

Cal Poly Arts & Otter Productions Inc. present Celtic Woman this Wednesday, May 18, in the Performing Arts Center (7:30 p.m.; all ages; $50 to $90 at 756-4849 or pacslo.org). The multi-platinum Irish music sensation has seen its recordings top Billboard’s World Music Albums chart a whopping six times! Their brand new show, Destiny, celebrates the simultaneous release of their new album and DVD, also titled Destiny. This will be an authentic taste of Ireland!