A touch of Celtic kinda suits you anyway

They bill themselves as the world’s first Celtic all-star Grateful Dead jam band, and though they’ve been performing together successfully for the past 10 years, it’s difficult to imagine another musical troupe melding ballads, jigs and reels with well-loved Grateful Dead lyrics. But to hear Danny Carnahan tell it, the two were tailor made for each other. SLOFOKS must agree because the non-profit is bringing the San Francisco-based band—Wake the Dead—to perform at Castoro Cellars on Sept. 26.

“If you strip a Grateful Dead song down to its underwear, what’s left is a folk song,” said Carnahan, who does vocals and plays octave mandolin, guitar and fiddle for the group. “We just took all the trappings off and explored the songs in their raw form. Clearly, not all of the Grateful Dead stuff works in Celtic clothing. Eighty percent of the stuff we do was written by Jerry Garcia and Robert Hunter, and both of them were fans of British Isle music.”

The process of meshing the two different influences was simple, organic really. Today, the group is a seven-piece band that refuses to perform without all of its members. But it began with three, Celtic harpist Maureen Brennan, Paul Kotapish who performs vocals, madolin, guitar, and jew harp, and Carnahan. All had come of age under the influence of rock and roll, and the Grateful Dead specifically. All had been youthful musicians, playing whatever they could, “not really making a lot of distinction between one kind of music and another,” according to Carnahan.

Individually they discovered, in different ways, that their disparate musical passions didn’t have to be exclusive. Carnahan realized that he could infuse Celtic jigs and reels into Grateful Dead songs while Garcia lapsed into a lengthy instrumental refrain. Meanwhile, Brennan would occasionally slip a Grateful Dead song into the sweet, polite classical refrains she was hired to perform at weddings. 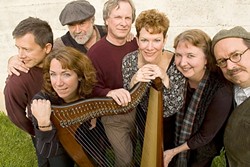 They resolved to embark on a musical and intellectual experiment, with the help of various vocalists and musicians who shared the same sense of creative adventure. They met simply, around a kitchen table in small groups and created a recording. Carnahan was familiar with the Grateful Dead offices, having recorded material written by Garcia and co-written a song with Hunter. He brought the recordings to the office, not expecting an earth-shattering response.

Two days later the CEO called with a gig for the band, which was not technically yet a band. The non-band had no name and the seven participants had never even stood in the same room together. And they were all busy with their own individual projects; each performs with other Celtic bands, Carnahan teaches at a junior college and freelances for magazines, and most of them have jobs as well. But in 2000 they began performing as a Celtic Grateful Dead hybrid, selling 20,000 albums in the first six months.

Even the name, Wake the Dead, seemed to fall out of a clear blue sky, relieving the group from the muck of whacky alternatives which were so bad that Carnahan is loathe to mention them. Before they knew it, the septet was an established band with three records, released in 2000, 2003, and 2007.

“It kind of surprised the heck out of us,” admitted Carnahan. “We only did the first album as an amusing exercise. But then we started figuring out how to play off each other on stage. Live, the energy is pretty high. The second and third albums are increasingly live albums. The third is almost completely live.”

Wake the Dead takes on classics like “Sugar Magnolia,” “Friend of the Devil,” and “Touch of Grey,” along with dozens of other Grateful Dead songs. They haven’t done “Dark Star” and are reluctant to take on songs written by Bob Weir, citing the fact that the majority of them are too rhythmically weird to marry with a Celtic jig. But each album also contains original material, usually by Carnahan or Kotapish. The past five years have seen an increase in their output of their own material, and the band has also expanded beyond the Grateful Dead canon towards music by other summer of love favorites like Bob Dylan.

In terms of venues, the musicians are deliberately picky. They don’t perform in bars or clubs, sticking with locales that can support a seven-piece band. They’ve traveled to Denver, Idaho, and Oregon, but mostly stick to Northern California. San Luis Obispo is as far south as the Deadheads will have performed, and they’re not really sure why. For whatever reason, Southern California seems to be less welcoming towards their hybrid genre. But, right now at least, close to home suits the musicians just fine.

“We’ve got, between us, 13 kids and that’s a lot of home responsibility,” said Carnahan. “We don’t want to go around sleeping on people’s hide-a-bed like we did when we were 20.”