Izakaya Raku is delicious and fun 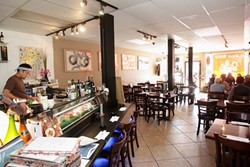 Whenever I find a restaurant that I respect, like most people, I tend to favor it. That said, long before I became New Times’ food and wine columnist, I’ve kept an open mind when it comes to discovering new restaurants. I love it when locals recommend a favorite restaurant. And I always get excited, hoping it will be the next review I can rave about. That’s what happened when I visited Izakaya Raku for dinner and over the following week revisited it twice for lunch.

When my last column about sushi bars appeared (Sept. 28), several people approached me to do their own raving about Izakaya Raku. After hearing so many bravos I went there for dinner with my spouse Dan the following Thursday night and we enjoyed a sumptuous meal of all of our favorite Japanese dishes. We began with the shrimp and vegetable tempura appetizer with a delicate, crispy coating. The selected vegetables were fresh and attractively sliced. Next we tried the delightful rainbow roll and maguro (red tuna) and sake (salmon) sashimi, followed by several sushi with hamachi (yellowtail) and shiro maguro (ono which is Hawaiian white tuna). We absolutely loved every bite.

Service was friendly and efficient even though they had no clue they were serving New Times’ restaurant critic. While we were paying our dinner bill the server brought over their special lunch menu, all you can eat for $23.99, available (lunch only) every day, except Monday when they’re closed. I told Dan, “We have to come back and try it.” I wanted to see if it was truly worth what I consider a large tab for lunch. I discovered that this was no over-done buffet where they’re pushing tired fish selections or soggy noodles, all prepared hours ahead. This is food made to order, just as they serve it at lunch or dinner when you don’t choose the pig-out option. But this is an excellent opportunity to enjoy an array of fresh sushi, hot appetizers, sukiyaki, and noodle specials.

However, there are some rules on the all-you-can-eat menu: no sharing and no leaving food on the plate. For instance, if you order the volcano roll, a full-size California roll topped with baked scallops and three sauces, you must eat it all or you’re charged a penalty of $3.00. Don’t worry, they’ll warn you of that should you start to wane. Otherwise, as long as you’re hungry the food will keep coming. 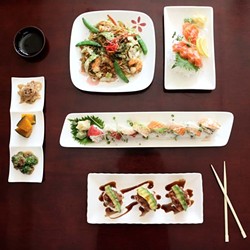 During our first lunch Dan and I first shared a green salad with a tangy ginger dressing and enjoyed the same full portions of sushi and sashimi we tried at dinner. Besides the rainbow roll we tried something new, the Grover sunset roll with tempura shrimp in the center and spicy tuna on top. When we finished, chef Tony Yoshida, who still had not met me, graciously (and quite generously I might add) called out to ask, “Do you want anything else?” We greedily ordered another salmon sushi to share. It’s quite a deal for walking away stuffed and totally sated. If you’re like us, you easily spend well over $25 per person in any sushi bar. And I’ve rarely been served food of this quality at such a value price.

Finally, I introduced myself to Tony and found the talented sushi chef has a great sense of humor. I said I noticed that he seems to know everyone and he explained with a grin: “My goal has been to know my customers, at least 80 percent of them, on a first-name basis and remember what they eat. It’s helping me because I don’t want to get Alzheimer’s later.” His wife Chie (Chee-A, not Chee-Ah) confirmed it when she told me, “He knows every regular by name and their favorite dishes.” The great service by Tony, Chie, their family and staff of friendly servers is exceptional, a comment repeated by everyone who recommended it to me.

Tony found the Grover Beach restaurant, formerly Samurai restaurant, when he traveled with a friend to SLO two years ago. He bought it and opened Izakaya Raku. He graduated from the sushi culinary school in Los Angeles in 1999. He told me students learned their slicing skills on vegetables. “They were cheap at the school. They gave us boiled daikon radish, which has a texture like raw fish when it’s cooked, to practice on.”

Afterward he worked in sushi houses in LA., Valencia, Little Tokyo, and Pasadena where he met Chie who was a server. It was eight years ago when she had just left Japan and spoke very little English. You wouldn’t know it now by her slight accent. They have two daughters, Sora, 5, and Umi, 3. When they married, Tony took her last name, Yoshida.

Chie became a U.S. citizen and sponsored her parents, Naohiro and Shigeko Yoshida, to move here. Her mother Shigeko heads the kitchen preparing the cooked dishes, and her father Naohiro helps where ever he’s needed. Chie’s mother owned an izakaya, the name for a Japanese drinking establishment that serves food to accompany drinks. Hence the name of the Yoshidas’ restaurant; that added “raku” means fun. “The food in an izakaya is more substantial than tapas or mezzé,” Tony explained, “and it’s unlike other Japanese styles of eating.”

“We make everything fresh, including our sauces,” said Tony, who suggested I try “real Japanese beer,” Echigo Stout and premium malt, which were amazing. I can’t wait to try more of their authentic Japanese cuisine.