Is there a better place to take in some country music than a Grange Hall? The fraternal organization, also known as The National Grange of the Order of Patrons of Husbandry, formed in 1867, making it the country’s oldest national agricultural advocacy group.

SLO’s Grange Hall No. 639 was chartered in 1939. There’s been a lot of boots through the current location at 2880 Broad St., which was constructed in 1950 after the original building burned down. This week you ought to pull on your boots and head down for a little foot stomping, starting this Thursday, March 3, when Cody Johnson performs a Numbskull and Good Medicine Presents show (7:30 p.m.; 21-and-older; $20 presale at Boo Boo’s and ticketfly.com or $25 at the door).

The Texan grew up in a tiny little town, fishing and hunting in the nearby woods. When his dad taught him the chords to the gospel song “I’ll Fly Away,” his music career took off. He entered public school his freshman year, and after his agricultural science teacher heard him play one of his original songs, he encouraged him to form a band with other FFA (Future Farmers of America) members. A short time later they came in second in the Texas FFA talent contest. Cody was hooked.

He started playing small honky-tonks and bars, and after a string of self-produced recordings, he finally broke through in 2014 with the album Cowboy Like Me, which reached No. 7 on the U.S. Country Charts (and No. 33 on the Top 200, demonstrating his crossover appeal to mainstream audiences). The country rocker’s newest album, Gotta Be Me, is due out later this year.

“I like the crowd to sing along, yell, or whatever makes them feel part of the show,” Cody said in press materials. “I love big crowds because of the energy and showmanship I can exhibit. I love acoustic shows because of the intimacy and how candid they are. Acoustic shows are like sittin’ around the living room ‘pickin’ and grinnin’.” 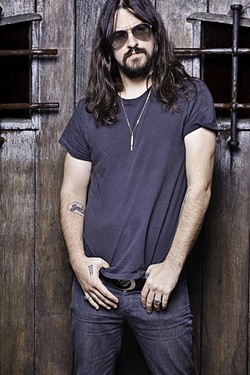 The following night, Friday, March 4, Numbskull and Good Medicine Presents bring a couple of sons of guns. The last names “Jennings” and “Nelson” are familiar to country fans, and while it’d be great if Waylon was still around to play a show and Willie could play a venue as small as the Grange Hall, we’ll have to make due with their talented sons, Shooter Jennings and Lukas Nelson, a couple of first-rate country rockers who’ll perform an acoustic concert (7 p.m.; 21-and-older; $22 presale available at ticketfly.com; $25 at the door).

Jennings plays everything from outlaw country to Southern rock to psychedelic rock. Nelson’s mainly a rocker whose most recent claim to fame was when he and his band Promise of the Real backed Neil Young on his 36th studio album The Monsanto Years and its subsequent tour, which began with a secret SLO Town concert at the now-closed SLO Brew.

Good Medicine also has a pop-up concert at Tooth & Nail winery this Friday, March 4, with Lucy & La Mer (5:30 p.m.; all ages; free), an LA-based acoustic alt-folk band featuring Lucy LaForge on her baritone ukulele, usually including Grammy-winning percussionist Matthew Cook and jazz bassist Jon Lee Keenan, though for this show, she’ll be playing as a duo with singer-songwriter Wesley Houdyshell of the folk band Gatsby’s Fiddle.

Last Stage West hosts Maine-based singer-songwriter Caroline Cotter on Thursday, March 3 (6 p.m.; all ages; free; call 461-1393 for dinner reservations), touring in support of her debut album Dreaming as I Do, which has already received national recognition reaching No. 5 on the Folk DJ charts in February, with the second most played song of the month, “Bella Blue.” According to her bio, “Caroline’s songs take you from an intimate Parisian salon to the mountains of Colorado and into the depths of the human heart.”

Nicole Stromsoe—Berklee College of Music grad and purveyor of fantastic jazz, blues, and folk vocals—returns to D’Anbino Cellars this Friday, March 4 (8 p.m.; 21-and-older; $15 tickets at 227-6800), for another sonic journey that explores the possibilities of the human voice. Joining the talented vocalist are Dorian Michael (guitar), Ken Hustad (bass), Dean Giles (drum set), and Darrell Voss (vibes and percussion), plus a special appearance by Cafe Musique’s Craig Nuttycombe! I’ve been listening to a few songs Stromsoe and company recorded the last time they were at this venue. Good lord, what a voice and what great acoustics in this room! Highly recommended!

The Red Barn Community Music Series presents Nathan Rivera & Jessie Andra Smith this Saturday, March 5 (5 p.m. potluck; 6 p.m. concert; all ages; $15 at the door). The duo plays “a fusion of jazzy folk and blues on National Reso-Phonic guitars and accordion,” according to press materials. “With dynamic interplay between female and male vocals, their trilingual performances are uplifting, fun, and with a message for people of all ages and cultures. They sing honest songs of love, life, and travel, with stories to match.” The touring act won Best Blues and Best Country at the 2014 Temecula Valley fest, and they have two albums to their credit, most recently If I Could I Would.

Cal Poly Symphony’s Winter Concert showcases the talents of student soloists in Harman Hall in the Performing Arts Center’s Christopher Cohan Center on Sunday, March 6 (3 p.m.; all ages; $12 to $14 general admission or $9 to $12 for students at 756-4849 or calpolyarts.org). Cal Poly’s talents run deep!

SLOfolks presents one of Scotland’s most venerable folks groups, Old Blind Dogs, playing two local shows about a week apart. Coalesce Bookstore takes first crack at the band this Sunday, March 6 (7 p.m.; all ages; $20 tickets at 772-2880); followed by Castoro Cellars, who hosts the band on Saturday, March 12 (7:30 p.m.; all ages; $20 available at 238-0725). Together for 30 years, the group is quintessentially Scottish, but that doesn’t stop them from adding in unexpected elements such as Afro-Caribbean rhythms. We recently learned that original band member Jonny Hardie will not appear with the band on this tour, but award-winning Scottish fiddler and singer Jenna Moynihan will fill in.

Songwriters at Play hosts a new singer-songwriter showcase at Otter Rock Café in Morro Bay starting Monday, March 7. The old Monday showcase location—Bang the Drum Brewery—will now host showcases on the third Tuesday of every month. This Monday features Nashville’s Bob Rea, who “toured with Jerry Jeff Walker more than 30 years ago,” according to his bio. “He’s been a homeless wanderer and a pool hall hustler, played in roughneck country bands across the great Southwest and been a regular performer at bars and clubs near his hometown of Durango, Colorado. He is the real deal, three chords and the truth, with soul and optimism that mine his lifetime of experience.” Special guest performers include Stephen Styles, powerhouse country singer and Rea’s frequent co-writer; Lucy LaForge of the band Lucy & La Mer; Wesley Houdyshell of Gatsby’s Fiddle; and Kristy Lee Sager (6:30 p.m.; all ages; pass-the-hat). 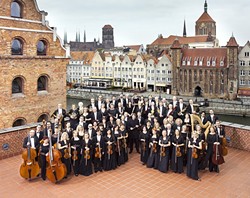 The Polish Baltic Philharmonic Orchestra plays Wednesday, March 9, at the Performing Arts Center (7:30 p.m.; all ages; tickets from $32 to $66 at 756-4849 or online at calpolyarts.org.). “Founded in 1945 on the heels of postwar Polish independence, The Polish Baltic Philharmonic Orchestra is the largest music institution in northern Poland, beloved by local and international patrons alike,” press materials claim. Expect Wagner’s Overture to The Flying Dutchman, Chopin’s Piano Concerto No. 2 in F minor, Op. 21, and Rimsky Korsakov’s Scheherazade Symphonic Suite, Op. 35.

Bay Area musician Ian Kashani and his band play Linnaea’s Café this Wednesday, March 9 (8 p.m.; all ages; pass-the-hat). According to his bio, “Vulnerability, faith, rejection, desire, and the death of innocence … these are the themes that haunt the music of Ian Kashani. After years of playing in punk bands during which he undertook tours of the U.S., Canada, and Europe, Kashani continues to venture forward as a solo artist, seeking to expand his creative palette and get in touch with the basic needs of the soul.”