Get in the herd

The Antelope Valley Poppy Preserve is off Highway 138 west of Lancaster. For a $10 fee, you can park in the preserve. The visitor's center is open until Mother's Day, and the bloom is expected to last through May.

You can smell them before you see them. Goldfields emit a scent that's earthy and sweet, a little musky: the aroma of spring in California's arid foothills. Their perfume is coming in hot as I walk along the path that leads visitors into the Antelope Valley Poppy Preserve west of Lancaster.

This state natural preserve isn't the reason why I drove three hours this morning, but I figured that I might as well see it while I'm here. When in Lancaster, right? I instantly regretted my decision about a mile before the preserve's entrance. Cars parked bumper to bumper on both sides of the narrow two-lane road. People hopping around on private property, selfie sticks in hand. Frolicking in the glory of social media super bloom heaven, they crush the flowers that already proliferated the roadside in perfect poses of an afternoon spent exploring peak poppy production. They didn't even need to go to the preserve!

Still, I press on, joining the herd of humans hungering for some orange-covered hillsides. Parking, I grab water and sunscreen—essentials—and start walking. The crowd of people is a bit unnerving. Children are upset with their parents for making them take this journey. Dusty steps ruin perfectly primped outfits. Large umbrellas protect some from the sun, endangering everyone else at eye level.

Feeling claustrophobic, I move a little faster as I stare at the hillside pathways before me swarming with little ant-sized humans. Maybe on the other side of these hills, I think, there is a less crowded space. Past the crest of a hill, down on the other side is a relatively empty pathway. Goldfields and poppies absorb the sun, glowing in the afternoon light. Like an abstract painting, they coat green hills in dollops of color. I know it's all been said before, but it's true. 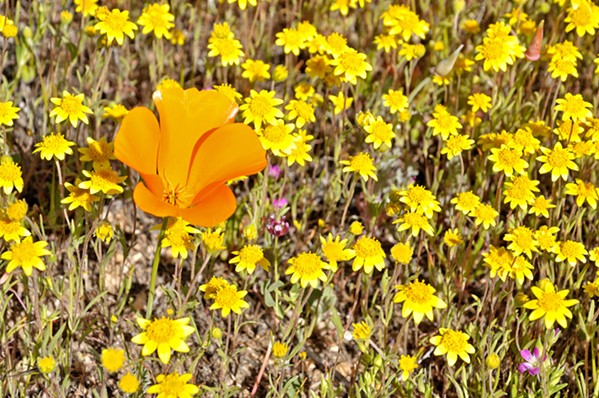 The trail meanders around the backside of the preserve, a space where the magnitude of flowers is visible beyond the preserve's borders. It is magnificent and peaceful, plodding along with nothing but dust and color in my sights. Coming back around the loop and up to the top, the fever starts again. A park ranger looks stressed as she moves from group to group of photo takers, telling them not to step off the wide trail into the flowers.

The orange expanse is interrupted by professional and amateur photographers (myself included, unfortunately) ready to capture the radiant display, families in matching outfits, and groups of teens, tweens, and 20-somethings dressed in their Saturday best. Honestly, it's a weird experience, but it sure is pretty. Δ

Editor Camillia Lanham is ready for the super bloom tourists to go away. Send your thoughts to clanham@newtimesslo.com.