A twelve-page list dictates the next step for SLO County's food and drink establishments ... if they can hang on till then

As of May 20, SLO County restaurants had received the green light from Gov. Gavin Newsom to begin reopening dine-in service. View the state's COVID-19 industry guidance for dine-in restaurants at covid19.ca.gov/pdf/guidance-dine-in-restaurants.pdf.

Excuse me if I sound like an Oklahoma farmer from The Grapes of Wrath, but writing about our food industry is really bumming me out. The new guidelines for opening dine-in read like a eulogy.

As the industry holds its collective breath, here's a doomsday statistic: According to a James Beard Foundation poll from mid-April, only 1 in 5 restaurant owners think they can stay in business until operations resume.

Meanwhile, some restaurants in other states received the yellow light to open. I got a little excited, but then I had a peek at their version of the new abnormal and thought, how nice to finally be out to dinner in dystopian 1984.

"Did you hear about the James Beard award-winning restaurant closing in New York?" Bryan Mathers, chef at Ocean Grill Avila Beach asked when I called him to find out how his restaurant has managed with the Paycheck Protection Program (PPP) loan from the CARES Act.

My short answer was, yes, I had heard about that closure. Another one bites the dust.

Mathers walked me through what his restaurant, which is in a secluded spot, is doing while everyone is isolating. Ocean Grill is currently offering takeout and delivery, with 30 percent off alcohol purchases. At the first news of the shutdown, Mathers said they were looking at how long this would last.

"We pretty much did all of the projections and did the math behind how much we'd have to make each day to keep going in order to keep employees on," he said. "And then there was also the factor of, well, this is how much the employees are going to be getting if they're not working right now. We were looking at staying open for a while, but then just the amount of money it was going to take to stay open was so much more than our potential was to bring in at that time."

Mathers, who has worked in restaurants since he was 14 years old, said no one was coming to Ocean Grill at first.

"Everybody kind of went into complete panic mode, and they were buying beans and rice without knowing how to cook 'em. And staying home and not going out to restaurants. Not getting any pickup or delivery," he said.

"We haven't seen anybody out in Avila Beach. We are even more isolated than some of the restaurants that did stay open ... . One of our drawing factors is the view, and if you can't enjoy the view ... you're not going to go to it."

Mathers said he and the owner closed the restaurant and stayed "glued to the news." They applied for the PPP loan so that their employees had somewhere to go—mainly back-of-the-house employees.

He said the owner is great with numbers, and their main focus has been helping out their employees with unemployment checks, stimulus, and keeping the restaurant alive for years to come. Personally, Mathers said, he grew up poor and spent many years working multiple restaurant jobs for minimum wage. He lives simply and said he'll be fine with a 50-pound sack of beans for months.

"My biggest thing was making sure my staff were doing good, because that affects me the most," he said.

"I know a lot of restaurants that just went out of business because of this," he added, saying we won't know what the "restaurant landscape" is going to look like in the future, but that he's fortunate the owner of Ocean Grill owns the restaurant property.

Other places are dealing with high overhead, wage costs, and taxes—no matter how busy or slow they are. On a bad day, if you over-order on certain food items such as meat and fish, "You lose big on that stuff."

He pointed out that even the restaurants that were busy pre-pandemic were not making much. He said the margins were so low, profits are around 1 to 4 percent.

In other words, the biz was already struggling, even before COVID-19.

"It's more the sit-down restaurants that are having a hard time," he explained.

The loan, Mathers said, is "kind of a curse and a blessing" because it doesn't matter how much the restaurant is making. "You have to have a certain amount of employees on the payroll, and be paying out a certain amount of it by this time. Otherwise, you have to pay it back. So we're way overstaffed for what we need right now, but it is nice, we're able to make sure some people are getting paid."

He said the approval process went smoothly for them, and their goal was to make it through May and get to summer so they could open up for dine-in in June—fingers crossed.

The tricky part: trying to project how much they would make with changes coming in every day.

"It was kind of a blind process," Mathers said, "... like playing Monopoly but you don't know what the dice look like. You don't know if you get to roll them or not. Every day we're told there's something else we gotta do ... . It's kind of a frustrating process. We're lucky that we've actually been pretty busy since we opened up for take-out."

His vendors don't have full access to their inventories and are running out of their frozen stock. Last weekend he ran out of rockfish.

"It's nerve-wracking to say the least."

He noted that there is hope for a better business model for restaurants on the other side of this. He said he favors the European and Australian service models, where the tip is included in the ticket price.

Mathews said if there's one way the community can help right now it's "try getting some of the to-go service from the smaller restaurants." 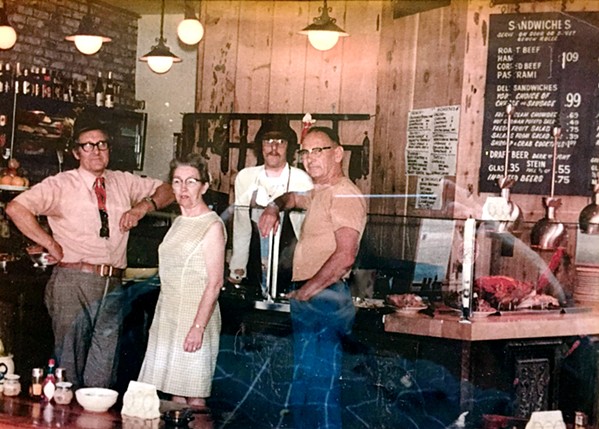 I also was fortunate to get Stan Van Beurden on the phone. He has owned Hofbrau der Albatross in Morro Bay since 1971, and his daughter, Alison, and wife, Kathy, help run the place. Van Beurden's brother, Paul, owns Dutchman's Seafood House.

He's the most seasoned restaurateur I've met, so I figured he could give me the most educated guess on how long our local restaurant business has to live.

At Hofbrau, Van Beurden said he wasn't that bad off. He's open for takeout now, after being closed for two weeks. He's making about 40 percent of what his sales would have been pre-COVID-19, and he said he's feeling fortunate to own his property. He said the PPP loan is also keeping him open, and he has all of his 14 employees back to work.

"I don't have a lot of debt to worry about," he said, "like new restaurateurs who may have been open one year, two years, five years—trying to pay off that initial mortgage, equipment loan, things like that ... ."

"Nothing is as good as being open," he added. "It's better than doing 20 percent and being depressed all the time."

When the restaurants closed for COVID-19, the first thing he did was call the small business development staff at Cal Poly for advice, helping him with preparation for the loan and he worked with Founders Community Bank to get it going.

"I actually had the money within two weeks. I feel for those who haven't been able to do what I've done. People have bars, and I don't have a bar and I don't have to worry about not being able to reopen."

He said knowing some fellow restaurants will not make it is tough to think about. His brother's place was able to reopen for take-out, but it took a month longer than his place.

"My main commodity is roast beef sandwiches," he said, noting that it's easier for places that are not full-service restaurants. "I can sell those all day long. People know what they want. I've been here forever. I've got that clientele. I've got that big advantage."

He has been trying to interpret the set of guidelines that make up the COVID-19 industry guidance for dine-in restaurants, as released on May 12. In my humble opinion, it looks like it was written by the most antisocial OCD germaphobe who ever lived. The short list includes basically doing away with bar seating, pushing to-go, and essentially not going near anyone.

Had he ever seen so many rules?

"Never in 50 years," he said, adding that even with the 12 pages of new guidelines, the steps were vague and unclear. "We've never had to take the kind of action we're taking now. The kind of rules and regulations. The uncertainty."

"To me, if you're going to make regulations for signage, for different things like that, you need to be a little more forward on what it is I need to do." He said if they lift the ban in two weeks, he just wants to have everything in place. "Do my tables need to be 6 feet apart from seat to seat, from table to table?" He's guessing and hoping he gets it right.

Van Beurden, a longtime local, was hoping one of his three daughters, Alison, would one day take over the family restaurant. But now the restaurant has a new set of worries. He has a walk-up model. Can't do that anymore. He has to reduce his seating up front by 50 percent. He has to install new Plexiglas above his already existing sneeze guards. He had to hire a new employee specifically for meeting sanitation guidelines.

And he has no idea how they're going to enforce these rules.

"Things I would never have thought of," he said. Δ