A unique twist on the most important meal of the day

The Sculptured Egg's food is housemade, and they're proud of it� 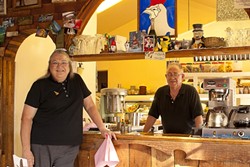 I just discovered the Sculptured Egg, a Los Osos café famous for its housemade breakfasts. I heard about it from Jerry Lithwin, a Los Osos contractor who recently remodeled my master bedroom and bathroom. He and his wife and business partner, Aimee Lithwin, the talented designer, told me they love this tiny little restaurant near their home. In fact, the Sculptured Egg has been serving locals breakfast for 35 years.

Aimee provided this colorful tip: “When you go, don’t ask for catsup. Marlene [Richardson, the owner/server] will tell you that you can go buy some in the store across the street, but make sure you take it with you when you leave.” Frankly, I’ve always believed catsup was created strictly for French fries. I empathize with the Richardsons for feeling that way. Pouring catsup on everything is an insult to the chef who makes everything from scratch, as chef Jeffry Richardson does here. It’s just plain rude.

I was eager to check out this unique eatery, perhaps even more so after reading the anonymous consumer reviews on Yelp.com, where I found some disturbing notes: One woman criticized Marlene’s husband Jeffry for wearing “street clothes” while he cooked; another woman claimed Marlene was always rude. Just as I had witnessed before at other restaurants, I discovered those harsh reviews were ridiculous. This served to confirm my belief about anonymous reviewers; you can’t put much faith in them, whether they’re writing something good or bad.

The Sculptured Egg is the proverbial hole in the wall, and I found it totally charming. First of all, it’s rare to find an honest mom-and-pop run place, but this treasure is the real deal. It’s been owned and run by Jeffry and Marlene since they bought the Los Osos property in 1972. The couple moved here from Idaho so he could attend Cal Poly to earn a degree in architecture. A very friendly woman, with no idea of my name or particular interest in restaurants, Marlene gladly shared their story. She said Jeffry had a natural talent for design and that they planned to move to San Francisco to find work. But as his graduation approached, she recalled, they had a change of heart: “We loved it here so much, we didn’t want to leave. But there were already too many architects around, so Jeff decided to open a restaurant,” she said, adding bluntly: “It wasn’t really my cup of tea, believe me.”

In 1983, they bought a historic old home in Pismo Beach that they’ve been restoring ever since. She quipped: “That house taught me not to be afraid of attempting anything.” An avid antique collector, she owns the antique store that’s part of their building. The dining room features some great pieces from her collection. The Richardsons recently rented the second kitchen and space in the back of their building to the Good Tides Espresso Café, formerly across the street (it will be open as a separate business).

Jeffry was the oldest of seven children who helped his mother cook for the family.

“You could say he was born cooking,” Marlene laughed. “He had to stand on a milk crate to reach the stove.”

Once the couple bought the Los Osos property to open their café, he created the menu and the recipes.

“When he started preparing to open the restaurant,” Marlene recalled, “he said: ‘I’m going to work hard to make sure it’s really good food, and we won’t serve catsup. We’ll let people bring it in if they want.’ Some people do bring it in with them, and it really smells up the dining room.”

Jeffry has done all of the cooking himself over the 35 years they’ve been open. Each week he starts over, Marlene noted, making everything fresh. That means he spends most of the day on Thursday and Friday making breads, muffins, granola, salsa, and more. They serve wine and beer, albeit limited, and make Bloody Marys.

“Where else do you find mimosas made with freshly-squeezed orange juice?” Marlene asked.

I loved that fresh, tasty juice and Jeffry’s excellent eggs Benedict. My husband Dan ordered a complex omelet, with nearly everything possible in it, and Jeffry made it perfectly. He whips the egg whites in an antique milkshake maker that makes his omelets the fluffiest version around.

Amazingly, he uses the sourdough starter he made when they opened the eatery. They keep multiple parts of it stored in several refrigerators, including the one at their home. That way if something happens to spoil it, they have a back-up.

“The first four or five years, it wasn’t all that wonderful,” Marlene said honestly. “But it keeps getting better with age.

“It’s kind of like having a pet: You have to feed it and take care of it all the time,” she concluded with a hearty laugh.

The Richardsons no longer hire employees. They came to a point several years ago when they decided to change the way they ran the place.

“We must have put 85 kids through college here, but we realized we’d be better off doing it all ourselves,” Marlene said. “We’re not afraid to work hard.”

My pal, Jim Gonzales, whose radio show “Ritmo y Sabor” airs on KCBX Public Radio, also loves this quaint place. He said he’s been eating there with his wife and kids since the early ’80s.

“Here is the thing about Marlene: She’s not going to take any grief from anyone,” he said. “If you have bad manners or bad social skills, she’s not going to suck it up and treat you nice. Marlene and Jeff are who they are, and their restaurant should be on everyone’s list to patronize. Go in the morning, take a newspaper, relax, and enjoy a great breakfast.”

Like me, I’ll bet you’ll be glad you discovered this gem.