A Ventura cider company burns in the Thomas Fire

Anna and Dominic O'Reilly worked to get their business, Anna's Cider, going last September but lost their facility, equipment, and first batch of hard cider in last December's Thomas Fire. 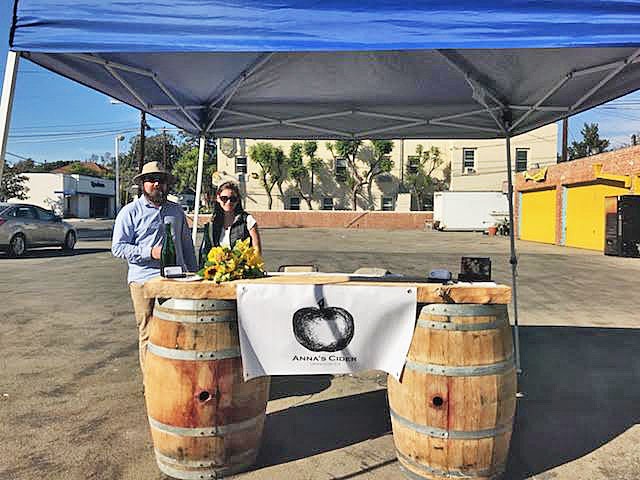 The Ojai couple is the first commercial hard cider producer in Ventura County. Dominic has a long background in winemaking. He got his start in the cellar of his family's winery, Owen Roe, and later earned his way into a management position. He's currently the winemaker for Topa Mountain Winery.

Dominic's experience inspired the couple to try their hand at crafting the apple beverage. Anna said that making cider is a similar process to wine because both methods involve using fermented fruit juice.

Anna said she and her husband worked for a year to get a license and the required permits to produce cider in a shed in their backyard.

Getting all the required paperwork was finalized in August, which is also the tail end of the apple season. Anna did her research to find organic and crisp tasting apples for their first batch. The couple had some difficulty finding enough apples for their experiment but SLO Creek Farms had enough produce for the first batch.

"We went with SLO Creek Farms because their apples are certified organic and they have such a fresh taste," Anna said.

Six hundred pounds of apples later, the couple had their first batch of cider in two flavors: dry and semi-dry.

Armed with kegs, Anna and her husband tested out their first batch on visitors that attended The Core Pour Festival in downtown Santa Paula.

"We were trying to see what people thought, and everyone was really positive about it. They said it was the first cider they've tried that actually tastes like apples," she said.

But the Thomas Fire raged through Ventura and Santa Barbra Counties beginning Dec. 4. Anna said her home was located near the starting point of the fire.

"It's hard to describe how we felt because we knew our road had been hit, but we just didn't know anything about our house," she said.

After the evacuation was lifted in their neighborhood Anna said their house was still standing but their cider facility was gone.

"We were grateful our home was spared, but our business that we had spent a year getting off the ground was gone," Anna said.

To regain what was lost, Anna created an Indiegogo fundraiser page—similar to GoFundMe. She said it's a way for the community to help the couple build another cider facility and purchase equipment. For those who give a minimum of $30, the couple plans to create a bottle label with a sketch or photo of the donor's face on it.

"I think it would be really neat to buy a six-pack and on each bottle there would be a different face on it. It's a way for us to say thank you to our contributors," she said.

• Tickets for the 30th Annual Live Oak Music Festival, that's happening June 15 through 17, are on sale now with a special promotion. This year, concertgoers can enjoy the event's anniversary with special throwback pricing through Jan. 31. Tickets will be available for the price that was offered when Live Oak celebrated its 20th anniversary in 2008. For more information on tickets visit liveoakfest.org.

• If you're traveling through Cambria, be sure to make a pit stop at Robin's Restaurant, which has been chosen as the 2017 Business of the Year by the Cambria Chamber of Commerce. The local business contributes to and promotes economic growth, stability, and improvement. Join owner Shanny Covey for an array of crafted comfort cuisine made from farmers' market fresh ingredients. For more information, visit robinsrestaurant.com. Δ