A volunteer on a mission

Like most kids, the members of the Red Dragons soccer team just wanted to have fun, hone their soccer skills, and play. The problem is, according to their coach, that last season they didn’t initially feel included in the Atascadero Youth Soccer Association (AYSA). You see, the Red Dragons are part of TOPSoccer, a community-based training and team placement program for young athletes with disabilities. 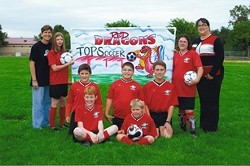 The team is coached by volunteer Marietta Szydlowski, whose day job is working with developmentally disabled adults through the Tri-Counties Regional Center. She asked the AYSA board, of which she’s a member, to put her team on last season’s schedule—and to their credit, the association tried to accommodate the Red Dragons in the league by giving them assigned times to play and fields to play on. But there were no teams to play against.

“It was kind of upsetting because they put us on the schedule, but I had to go to the coaches of the other teams and ask them if they were willing to play us,” Szydlowski said.

According to AYSA’s new Regional Commissioner Carrie Ragain, who’s also on the board of directors, the association did its best to accommodate the Red Dragons, but turnover on the board and a lack of understanding about the TOPSoccer program caused some confusion.

Still, Szydlowski didn’t think the situation was fair, so she went before her own board and told them so.

“My main thing was that it was frustrating. ‘Here you want to include these guys, but really you’re not if you’re not giving us teams to play against,’ I told them. I also had one of the parents come and talk to the board, and she said, ‘Your teams would be lucky to play us.’ She really had an impact. After she spoke, the board got quiet. When I spoke to them later about next season, they assured me they heard us loud and clear and that we’d be on the schedule next year.”

According to Ragain, the board actually went out of its way last season to arrange games for Szydlowski’s team, but she agrees there was some trepidation, especially for the coaches of the youngest players.

A few teams weren’t willing to play the Red Dragons—in part because the Red Dragons had players as old as 18 and the AYSA league is divided by age, so some coaches thought their kids were too small to go up against older kids, disabilities or not.

“This was a live-and-learn situation,” Ragain said. “The board decided [for next season] to have the Red Dragons play the U12 teams because those kids are old enough to understand. Younger kids may not even realize what special needs are.”

In the end, the Red Dragons had a team to play every weekend of the season but one.

“A lot of teams did step up and play us, and one parent told me, ‘This is the best game my daughter ever played,’ because it was so inspiring,” Szydlowski said. “We also played against a Girls U18 team, and these were girls that played really competitive high school soccer, but they were helping our players make goals and cheering for them, helping them up if they fell down. I have one player who’s on crutches.”

As far as Szydlowski is concerned, it’s just as important for “regular” kids to play against her special needs kids as it is for her kids to play “regular” kids. The lessons go both ways and teach sportsmanship, grace, and that winning isn’t the most important thing in life. Szydlowski’s message is simple: All kids should be valued, encouraged, and supported.

“Our organization services over 700 children in Atascadero,” Ragain wrote to New Times in a follow-up e-mail. “Our board is fully a volunteer organization who works very hard to service all the children of our community to the best that we can. Most of us are full-time working parents and as I mentioned, last January, most of our board was new to the program and there was a large learning curve for all areas. Each new board member had to learn and deal with their responsibilities, which usually takes one full season to understand.”

AYSA will be transitioning to AYSO (American Youth Soccer Organization) and TOPSoccer will now be called VIP. Ragain encourages all interested parties to participate in next summer’s season.

Staff writer Glen Starkey can be reached at gstarkey@newtimesslo.com.