A whale of a protest

Sparked by the amazing display of humpback whales in Avila Beach only a week prior, environmental activists gathered at Port San Luis on Sept. 1 to voice their appreciation of whales and to decry Pacific Gas & Electric’s plan to conduct offshore testing that’s bound to adversely affect marine life. 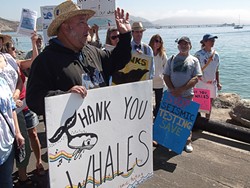 That seismic testing entails towing audio arrays off the back of an academic vessel to record sonic reflections from massive underwater air blasts in an effort to create a 3D map of the underwater geology surrounding the Diablo Canyon power plant.

PG&E Spokesman Blair Jones wouldn’t comment on the protest, other than to say the utility is aware of residents’ concerns. Blair did tell New Times, however, that the 3D images are vital to ensuring the safety of all residents.

“In the aftermath of the Fukushima tragedy in Japan, people in the community are understandably concerned,” Jones said. “[PG&E is] taking all possible actions to assure the residents of SLO County that the safety of Diablo Canyon is a top priority.”

Stop the Diablo Canyon Seismic Testing’s Facebook page, created by local activist Joey Racano in July, has so far received 879 “likes” and is being discussed by 1,300 users as of press time.

“It’s amazing what social media can do,” Racano told New Times during the demonstration. “[Anti-Diablo Canyon protesters of yesteryear] didn’t have Facebook or the impetus of Japan or Chernobyl. Turning 500 nautical miles into an underwater desert is not a good return on such a large investment.”

After receiving approval from the State Lands Commission in August, the surveys are scheduled to begin in November and would continue through the calendar year. Should the project not be completed, the same window of time will likely be permitted to finish the testing in 2013.