The best things come in threes—Lord of the Rings movies, Destiny’s Child, helpings of Madonna Inn cake. I think I’ve made my point. You see, typically, when the time comes for New Times to gather ’round the roaring fireplace with a musty pipe in one hand, a slice of pizza in the other, and recall the finer moments of the past year, the people conversing have been there for most of that year. Well, I haven’t. I was very busy for most of 2014 finding the perfect Dorito with just the right ratio of cheese dust to tortilla chip. While I was preoccupied with that, there were two lovely ladies acting as New Times arts editor—Anna Weltner and Erin Messer. Since I haven’t overseen all the arts happenings of 2014, I thought I’d present you fine readers with a primer for each editor’s epoch. It’s been an offbeat and interesting year, so let the reminiscing commence! 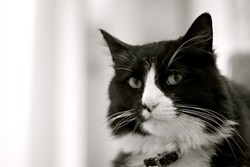 On a global scale, January was somewhat of a slog. Latvia finally adopted the Euro as its currency (you can all stop holding your breath), and someone decided what the American public really needed was another Paranormal Activity movie. On the arts front here in SLO County, things were a little more exciting than the status of Latvian currency and cheap movie spooks.

Cal Poly’s Performing Arts Center played host to the second tour of the world’s first Internet Cat Video Festival. With dozens of entries and even more attendees, the festival featured a wide range of pretty pawesome cat films, from Vine shorts to the black-and-white chronicles of Henri le Chat Noir, a French cat filled with existential dread. Talk about the cat’s meow! 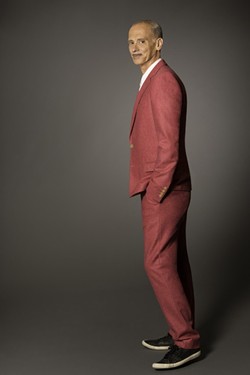 If you thought cats were the height of entertainment, think again, bozo. In February, the outrageous and obscene John Waters made the New Times cover just in time for Valentine’s Day. On Feb. 25, he brought his one-man show to the Fremont Theater, and in an exclusive interview with us, he left nothing on the cutting room floor. There was the time he got arrested in SLO for drunk walking. “I wasn’t even that drunk!” he protested. “I wasn’t staggering or anything. … And that’s the first time in my entire life that I’ve almost been arrested for walking while impaired.” That’s only the beginning of an immensely colorful conversation that covers everything from Waters’ book about hitchhiking (Carsick) to his cinematic influences to his lesser-known career as a visual artist and curator. At the end, he left us with this morsel of wisdom: “We should all be tired of being outsiders. It’s such a tired word today. Let’s be insiders. That’s even more perverted.”

The era of Erin (March - June)

At the end of February, two immense events took place. One, Arts Editor Anna Weltner left and two, Jennifer Lawrence once again fell all over herself at the Academy Awards. It was quite the time to be alive. After the harsh, winter winds of January, things looked like they were heating up as former Calendar Editor Erin Messer stepped up as arts editor for the spring season.

Every March, the San Luis Obispo International Film Festival is our golden ticket here at the arts desk. It’s the time when the adults allow us to dress up in fancy clothes, present awards, and mingle with people in even fancier clothes. This year was no exception. In fact, it was even better than usual because this year marked the 20th anniversary of the film festival. The affair boasted a screening of Fritz Lang’s modernist masterpiece, Metropolis, a Les Miserables sing-along, and “The Dude” himself Jeff Bridges as the recipient of the festival’s 2014 King Vidor Award. 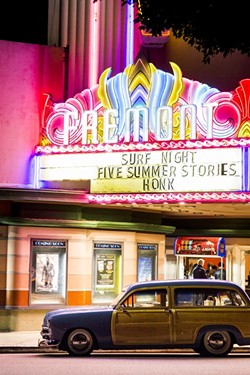 It was an elegant and entertaining event, but perhaps the high point for us was one particular exchange of dialogue between Erin and The Tribune’s Arts Editor, Sarah Linn. While presenting an award, Linn remarked that The Tribune was “the paper of record for SLO County.” Messer returned with a witty rejoinder. As Glen Starkey wrote in his ArtBash coverage, “Erin Messer gets up to present an award and introduces herself as being from New Times: ‘We’re sort of the paper off the record for SLO County, if you know what I mean.’ Internet applause! New Times for the win!” 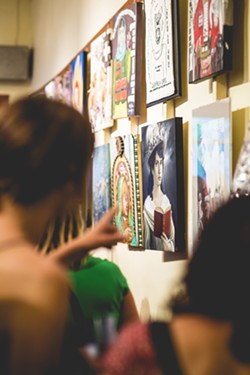 Women on the verge

This spring proved not only fruitful for actual fruits (I’m looking at you, Santa Maria Strawberry Festival), but ripe for innovative and diverse art exhibits. One of the more memorable and impressive displays this year was Powerful Women, a collection of works curated by SLO artist Lena Rushing at Linnaea’s Café. From Jillian Wefald’s lustrous portrait of 18th century feminist Mary Wollstonecraft to Janelle Younger’s wooden assemblages, the event offered incredibly skilled art by wonderful women for wonderful women.

The period of Peña (June - present)

It must’ve been the heat. As summer cast its warm haze over the minds of the New Times editors, they decided to hire Jessica Peña—a little-known Los Osos resident and part-time bridge troll. Here are the highlights from her tenure thus far. 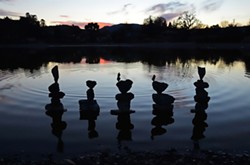 Rock balancing. That was the pitch. At the office one afternoon, we received a call from Kathy Clarke, an Atascadero resident who, for real, balances rocks as an art form. It was a strange pitch, but what resulted was surprising and off-kilter from your typical arts piece. Clarke’s been balancing rocks with the utmost of skill for most of her life. Over the years, she’s become one of the best in California, if not the country. This August, she was invited, along with only 14 other rock balancers, to Balanced Art World International—an event that featured some of the world’s top balancers and took place in Ottawa. “This is like a wonderful exercise in present-moment awareness,” she said. Rock on, Kathy! 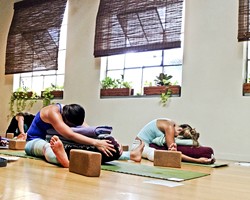 There will be blood

I may or may not have been in my right mind when I decided to try out a yoga class about menstruation called “Sun and Moon Flow.” Again, it was probably the heat. Though, like rock balancing, this may not have been a conventional arts article, it was probably one of the more entertaining pieces to published in the section this year, if only for the more memorable phrase, “pre-monstral syndrome.” 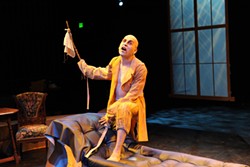 There will be blood (redux)

This fall, there were many fine theatrical performances throughout the county. SLO Little Theatre brought their A-game with many admirable and diverse pieces. Cal Poly continued to defy expectations with the raunchy and savvy production of Betty’s Summer Vacation. But Cuesta College’s staging of Dracula takes the cake for pure visceral and visual flair. From spurts of blood to sparks of real fire to the decadent costume, stage, and lighting design, Dracula really sank its teeth into the audience.

It’s the end of the year, why are you still reading? Get crazy! You can send party invites to Arts Editor Jessica Pena at jpena@newtimesslo.com.