On June 30, a crowd of 1,500 people flooded the plaza outside the SLO County courthouse. They'd come to protest the Trump Administration's now defunct policy of separating undocumented immigrant children from their parents at the United States' southern border.

They brought signs, of course. Some simply demanded that the government reunite the families, but others called for taking things a step further with a 10-letter, two-word demand. 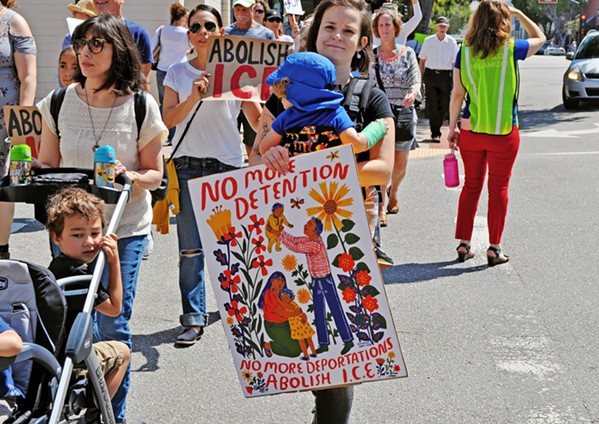 Since the June protests, the subject of dismantling U.S. Immigrations and Customs Enforcement [ICE] has become a flashpoint for the nation's Democratic voters. Some believe abolishing the agency is a moral imperative, while others say the idea is too extreme and worry that the issue will be used as a cudgel by Republicans and scare off independent and undecided voters in the November midterm elections. The divide is playing out on the Central Coast, where the subject of abolishing ICE has already reared its head as a topic in two political races.

In the last two months, a handful of U.S. Democratic political candidates and lawmakers have come out in support of abolishing ICE. U.S. Rep. Salud Carbajal (D-Santa Barbara), however, isn't one of them. Carbajal, whose district includes SLO and Santa Barbara counties, said he doesn't believe that getting rid of the agency is a path worth pursuing. He noted that the agency, which is part of the Department of Homeland Security, operates at the behest of the executive branch.

"It's not so much the agency, but the president's policies. ICE does what the president says," Carbajal told New Times. "While I'm not for abolishing ICE, I am for Congress insisting on greater responsibility, transparency, and accountability."

In July, Carbajal was one of 133 congressional Democrats who voted "present" on a Republican sponsored bill titled, "Supporting the officers and personnel who carry out the important mission of the United States Immigration and Customs Enforcement." The symbolic bill was introduced after a Democratic member of Congress unsuccessfully attempted to introduce a bill to abolish ICE earlier that month. A vote of "present" signals neither support nor opposition to a bill. Carbajal said he voted that way because he believed the bill was a political stunt by Republicans, who he said have failed to address meaningful reform issues like the DACA (Deferred Action for Childhood Arrivals) program and immigration-related labor issues.

"None of those issues were addressed in that legislation," Carbajal said. "It was a gimmick, a distraction. They are wasting time instead of trying to solve real immigration challenges."

Carbajal's opponent in the November election, Republican Justin Fareed, wasted little time in capitalizing on Carbajal's vote on the bill, characterizing it as "shameful" and stating that supporting ICE was a "no-brainer."

"I was appalled that my opponent refused to support a critical law enforcement agency," Fareed told New Times.

Fareed was critical of what he said was Congress' failure to pass meaningful immigration reform, stating he was for creating a "fair, comprehensive, and merit-based" system. However, Fareed indicated that he viewed the subject of ICE as a public safety and law enforcement issue, noting that the agency worked to combat terrorism, drug trafficking, and undocumented criminals.

"I don't think it's fair to condense those two things [into one issue]," he said. "We need to keep our communities safe."

While whomever ends up going to Washington, D.C., after November could have some say in ICE's future, the topic also emerged as an issue between two candidates running for SLO city mayor, a local office with little control over federal immigration enforcement policy.

Since the June protests, incumbent and progressive Democrat Mayor Heidi Harmon has publicly called for nixing ICE. In July, Harmon signed her name to an open letter calling for abolishing the agency. Of the 188 public officials across the country who signed their names to the letter, Harmon was the only one from SLO County to do so.

"Our government should encourage civic and community participation and increase the quality of lives of our residents," Harmon wrote in a statement about the letter on her Facebook page. "The presence of ICE in our neighborhoods, schools, workplaces, places of worship, and homes, makes this impossible."

When asked about the issue at a mayoral candidate forum for the SLO Progressives Club on July 26, Harmon's stance remained unchanged.

"I am 100 percent for abolishing ICE," said Harmon, who earned the endorsement of the group.

Her opponent, T. Keith Gurnee, told the audience that he was in favor of comprehensive immigration reform, but also wanted secure borders.

Gurnee, a long-time Republican who switched his party affiliation to Democrat in May, has been critical of Gov. Jerry Brown's stance on undocumented immigration. In an editorial published on CalCoastNews in March, Gurnee said he was in favor of U.S. Attorney General Jeff Session's decision to sue California over the state's so-called "sanctuary" laws.

"Sessions was right in challenging California's willful disobedience of the laws of our land," Gurnee wrote. "And California deserves to lose that challenge."

A national poll conducted in early July by Morning Consult and Politico found that 43 percent of Democratic respondents support getting rid of ICE. However, the poll also found that 54 percent of all the respondents, including the majority of the Republicans and independents surveyed, favored keeping the agency. Δ