Abraca-awkward!: How I wound up on the cover of Poof magazine 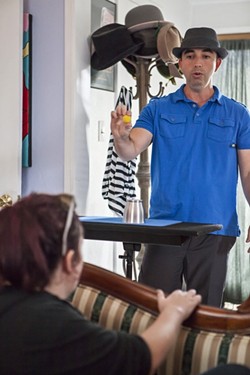 My boyfriend woke me up the morning of my birthday party to tell me the bounce house was cancelled. I hadn’t even known there was going to be a bounce house until that moment. The weather gods, it seemed, were keeping up their perfect record of rain on my birthday, which made me feel a little conflicted. On the one hand, California desperately needed the rain. On the other, I wanted my damn bounce house.

It was OK, though, because magicians are weatherproof, and my boyfriend had apparently decided that the best thing to do when your girlfriend’s anxious about turning 30 is throw her a child’s birthday party. (He’s right, by the way.)

So with the exception of the keg of hard cider he rolled into the house the morning of Feb. 8—that’s right, a keg of hard cider ’cause I don’t drink beer, and on your birthday you deserve a keg filled with whatever you want—the party was mostly crafted around what a child would want to do, eat, and watch.

Enter Derek Hood (magicofderek.com), who markets himself as a magician-mentalist. I’ve never been a big magic fan, unless you count Magic the Gathering, which I was a pretty big fan of in middle school and junior high. But anyone who can waltz into a room of semi-sober adults shouting lines from Arrested Development—G.O.B. Bluth’s a really terrible magician—and flip through a deck of cards without batting an eye deserves a fair bit of credit. I gotta say my favorite trick of the night was when he appropriated $20 from a member of the audience (he asked for $100, but we’re mostly journalists and artists so no one had one) and it somehow wound up inside a lemon. There’s a joke in there, but I think I’d had too much of the pear cider at that point to put it together. 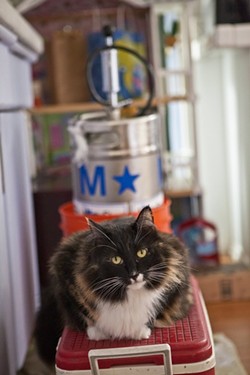 What would any child’s birthday party be without food? There were chips and pizza and dip and shrimp and donuts and cake. If you pictured a polite cake, maybe with some primary color balloons, you’re way off track. The problem is, my boyfriend knows enough of Photoshop to use it for evil purposes. And I just finished the entire series of Buffy the Vampire Slayer. Logically, the only thing to do was for my boyfriend to Photoshop my face into a promotional photo for the show, with Spike smoldering over my shoulder. The effect was not flattering, and I made Staff Writer Rhys Heyden eat the piece of cake with my face on it in order to get rid of it. I’m not really sure whether we violated any copyright laws, so if you want to see the cake you’ll have to visit my blog at janeeyrelikescupcakes.wordpress.com. 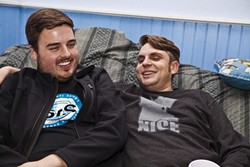 There was a pretty decent crowd assembled to watch the beginning of my awkward plummet into spinsterhood—most of them past or present coworkers. Heyden and Staff Writer Jono Kinkade snuggled on the enormous beanbag in my living room, past sales rep Matt Foote and his wife Kristin Carley arrived with original art pieces they sketched from photos on my Facebook page, which takes stalking to a really cool, creative place. Former calendar editor Maeva Considine arrived with her girlfriend Aileen Manley and a backpack covered in cats and cupcakes. It’s like they want me to get beat up on my way to work. But when you’re sporting a backpack that cool, you don’t even care that you’re getting beat up. Mignon Khargie, collaborator on my magazine project, San Louie, and the genius talent who designed my book cover, was present, as was Lena Rushing, who I’m pretty certain was mostly there for the bounce house (I don’t blame her; I’d go just about anywhere for a bounce house). Former intern Ana Korgan put in an appearance. My high school band buddies Natasha Ortiz and Kristi Blanding drove all the way from L.A., making me feel pretty damn special, but also leading me to conclude that there are no lengths people won’t go to for a bounce house. And former staff writer Kylie Mendonca drove down from Davis, which is astonishing because I never thought I’d live to see the day the avid bicyclist drove anywhere—but Kylie’s birthday is just a week after mine so maybe turning 30 changes people, makes them do boring adult stuff they never did before. Of course, former New Times office manager Tadhg Morrison was there as well, and if you’re confused about his name, just know that he’s Irish.

And there you have it. The party’s over. There’s a little cake left, but I don’t think it has much chance of surviving beyond a week. And after the magician’s packed up his box of tricks and the keg is empty and the guests have gone home, it’s just me, my boyfriend, our two cats, and this driver’s license that says that I’m 30.