After Abram Baxter signed a deal with prosecutors, he thought his legal troubles were behind him--then he was told it didn't count

On March 20, after almost a year of legal battles, Abram Baxter is due to head back to the San Luis Obispo County Superior Courthouse to face a felony marijuana charge. 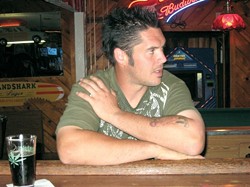 Baxter allegedly sold 12 ounces of marijuana to an undercover police officer on July 12, 2006, but he wasn't arrested until local sheriff's deputies and federal agents raided the dispensary on March 29, 2007, nine months later. The dispensary later closed for good.

As the only person arrested on the day of the raid, Abram Baxter--amateur mixed martial arts fighter, musician, and father of a toddler--made headlines and served as the very public face of a very public clash between state and local laws and between differing views about whether medicine can be grown in a garden.

If Baxter isn't any run-of-the-mill suspect, maybe that's why his story doesn't follow the high school civics book model of the way the criminal justice system is supposed to work.

The charge that Baxter is set to face on March 20 is one that, just a few months prior, he was told was over and done with. He'd signed a plea agreement with the District Attorney's office and said he walked out the courthouse door that day relieved to have everything behind him, particularly since he'd exhausted all of his savings on attorney's fees to end the matter.

Then he received the notice that the plea bargain he signed along with his attorney Greg Jacobson and local judge Ginger Garret was being withdrawn, nearly three months after it was offered.

"I couldn't believe it," said Baxter, who at the time was training and promoting for Combat USA--a minor-league mixed martial arts organization based out of Green Bay, Wisc.

"It knocked me off my feet," he said.

After signing the deal, he said, he felt "very relieved to finally move on with my life."

"Now, I might have to do some jail time," he said. "It would be awful to be away from my family and job. All I really care about is my daughter."

During a Nov. 13, 2007, pre-preliminary hearing, Baxter accepted a plea bargain that reduced his felony marijuana charge to a misdemeanor.

No one disputes those facts. The deal was offered, and he accepted it. He signed on the dotted line, as did his attorney, and the entire matter was handed over to the judge, who also signed the deal.

Yet the day after the 27-year-old Los Osos resident signed the paperwork that would have sentenced him to 30 days informal probation, the deputy district attorney handling the case, David Pomeroy, filed a written motion to retract the deal. After months of delays, the judge agreed with prosecutors and set aside the plea agreement last month, on Feb. 19.

"I made a mistake," Pomeroy said in an interview, explaining why Baxter was offered the misdemeanor plea bargain. "I realized the mistake about one minute after he accepted the plea. I then immediately brought it to the court's attention and filed a motion to set aside the plea based upon the mistake."

In his telling, Pomeroy tried to get the judge to set aside the plea immediately, while Baxter's attorney was still in court, although that was after Baxter said he walked out the doors considering his legal troubles to be behind him. The judge declined, however, and required a written motion.

According to Pomeroy, who has been working in the judicial system for the past 30 years, he confused Abram Baxter's case with another one involving a 20-year-old named Donald Mark Baxter, Jr. He also said it marked the first such mistake of his long career.

Although the two cases were similar on the surface (both were felony marijuana charges involving men named Baxter), they were substantially different when it came down to it. Abram was being charged with allegedly selling marijuana. Donald was allegedly involved in a small medical marijuana grow operation.

Pomeroy said that he never would have offered the deal to Abram, whose alleged crime he considers more serious than Donald's.

Abram, for his part, doesn't buy the idea that Pomeroy had him confused with someone else.

"I've been going to court for a year and there's always television stations and reporters waiting for me. It's such a prolific case. How did they mix me up with someone else?" Abram asked.

Instead, he believes: "Justice is not being served."

Donald Mark Baxter, Jr., basically declined comment, but did say that he was offered the same plea Pomeroy offered Abram. He said he turned it down because he feels he didn't do anything illegal.

But for Abram, the case started anew. And that change has come at a financial cost.

Abram said he used up his savings to pay his initial attorney, but at some time after the plea mix-up, the SLO attorney stopped representing him.

Now Abram is being represented by public defender Matthew Guerrero who, coincidentally, is also representing Donald.

The public defender said that Abram did not misrepresent himself to get the initial plea.

"I think it's disappointing for [Abram] not to get the best of his bargain," Guerrero said. "He relied upon the plea to start another life in another state. But medical marijuana is viewed unfavorably by the courts."

Abram's initial attorney did not respond to repeated calls and requests for comment.

Donald is also scheduled to be in a courtroom for a hearing on his case on March 20.

The Fifth Amendment to the U.S. Constitution puts it like this: "nor shall any person be subject for the same offence to be twice put in jeopardy of life or limb." More commonly, this particular legal protection is known as double jeopardy.

Black's law dictionary puts the protections offered by the concept of double jeopardy in simple terms: A person "shall not be twice tried for the same crime."

On the face of it, the act of offering a plea agreement to someone, then retracting it, may seem like a violation. Pomeroy, however, said that the constitutional protection exists only after a person has been sentenced.

Local criminal defense attorney Chris Casciola said that's technically true, but also noted that in his nearly three decades of experience, he's never seen a situation like this one.

"It's an extremely unusual situation in the criminal justice arena," he said. "I would suspect [Abram] would have [the] right to appeal the ruling.