Visit Absolution Cellars in Morro Bay Thursday through Tuesday from noon to 6 p.m. at 845 Embarcadero, suite H. Reserve a tasting online at absolutioncellars.com. Find it on Facebook and Instagram @absolutioncellars.

As Absolution Cellars owner Dirk Neumann pours a taste of 2020 rosé out on his Morro Bay patio, he launches into the story behind it. Every wine he pours has a story.

This particular rosé is made from sangiovese grapes, but they aren't just any old grapes. They come from the Michaud Vineyard in Monterey County, which grows grapes in the Chalone American Viticultural Area—a region that placed third in the now infamous 1976 Paris competition when Napa Valley beat out French wines in a blind tasting. Well, Neumann said, you may have never heard of Chalone, but wine from the area beat out all but one French wine that day.

Michael Michaud has been making wine and growing grapes in the region for more than 40 years, Neumann said, in the shadow of Gavilan Mountain Range spires that are now part of Pinnacles National Park.

"He only grew three-quarters of an acre of sangiovese, and it all went in this wine," Neumann said. "I'd rather make three barrels of this than any other rosé."

Sangiovese, he said, is a more savory grape than something like a grenache or pinot noir—which Central Coast wine consumers are more used to drinking. The rosé of sangiovese drinks great as a "poolside, front porch sipper, beach wine," but it also can meet a Thanksgiving dinner halfway. It's versatile, Neumann said.

Absolution Cellars makes from one to five barrels (translates to between 24 to 124 cases at the most) each of about 14 different wines, mostly single varieties sourced from single vineyards from Monterey to Santa Barbara counties.

"So many different micro-climates and unique regions, so why not?" he said. "I tell people, 'We're going to go on a tour of the Central Coast today with our tasting.'" 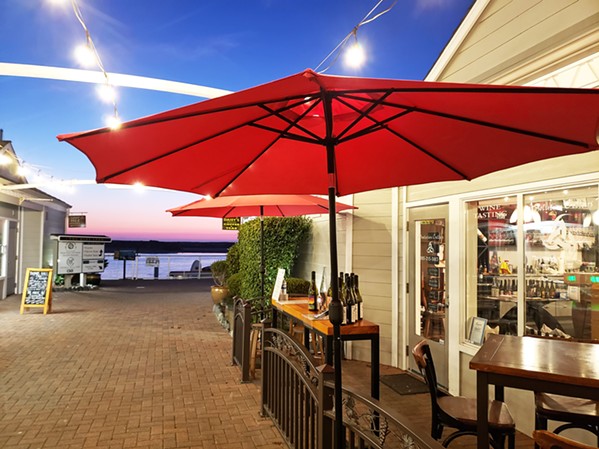 The tasting room in Morro Bay opened in February 2020, five to six weeks before the state's first COVID-19 pandemic lockdown. As a new winery, Absolution Cellars had to get creative to put the word out about its wine.

Neumann said he donated cases to local nonprofits such as Wine 4 Paws and the Christopher Meadows Memorial Fund and reconnected with people across the country via social media. Seeing how stressed out everyone was with the pandemic, he offered his wine up as a bit of a reprieve—and was floored by the response he got.

So many people, he said, were interested in supporting his business venture.

"It was not the ideal way I wanted the business to start, but I got to re-establish some long-lost friendships and strengthen others," he said.

As someone who spent a couple of decades in the home-building industry, Neumann refers to winemaking as his chosen second-half-of-life career. When he moved to the Central Coast from South Florida in 2013, he said, he knew he wanted to do something in wine. He just wasn't sure exactly what that would entail.

Accounting, finance, marketing, product planning, land acquisition, you name it, he said, he covered it at some point in his career. His goal was to retire on the Central Coast, but Neumann said he ended up moving here a lot earlier than he originally thought after realizing that he could continue doing freelance market research for builders and developers from anywhere in the country.

In 2011/2012, he was visiting Santa Barbara County and participated in Margerum Wine Company's winemaker for a day program. Neumann said he hit it off with the winemaker at the time, Jason Barrette (who's now the general manager and chief winemaker at Hemera Estate Wines in South Australia), and got the opportunity to make a one-bottle blend out of the barrels at the end of the day.

"What I enjoyed the most about it was that I wasn't sitting in front of a a computer. I was working with my hands for the first time in a long time," Neumann said.

In 2014, he joined a wine co-op in San Luis Obispo that enabled hobbyist winemakers to rent a barrel for a year and work with a winemaker to purchase grapes and get them in the barrel. People liked the end product of that year, he said, so he decided to do it again, attending as many wine events and talking to as many winemakers as possible in the process. And by 2017, Neumann had way too much of his own wine around to drink in his lifetime. He had a decision to make.

That year, he committed to making just under 300 cases of wine. He doubled it in 2018, and by 2019 he made almost 1,000 cases of wine. So, it was time to find a tasting room, which happened to be a spot on the Embarcadero in Morro Bay that opened up next to Chateau Margerum.

Neumann views himself as sort of a niche winemaker. He's interested in making single vineyard, single variety, small batch wines that really showcase the place they came from.

"I was told: 'Buy good grapes.' If you buy good grapes and you don't mess with them, the chances of getting a good wine are pretty good," he said. "One of the things I love about the wine industry is just how open and friendly and helpful everyone is, at least in our area."

His foray into making albariño is a good example. Neumann put a post in a winemakers group on Facebook, asking what he should look out for—must dos, must don'ts. Winemakers from Portugal responded, sending him their entire protocols from growing the grapes to bottling it.

But he took what he could from the responses and found a vineyard specializing in Iberian (Spanish/Portuguese) grape varieties in the San Antonio AVA of Monterey County. Pierce Ranch Vineyard's owners are of Portuguese descent, which is one of the reasons Neumann chose to purchase grapes from them.

Absolution Cellars 2020 albariño is crisp and refreshing with acidic minerality in the finish and peach notes on the nose. Neumann said he went out and tasted the grapes with the vineyard manager before they were harvested, and grapes grown in different blocks on the property showed different characteristics. The stone fruit characteristics, he said, come from a block of albariño grown on a hill, which was blended with those grown in the valley.

"It's amazing that one grape, just through variants in soil, elevation, orientation can add such a distinctive characteristic," he said. Δ