Courtesy Photo By Jenny Ashley COMMENTARY Images from Jenny Ashley's Lampshade Project, such as Lady in Waiting, are part of Studios on the Park's latest exhibit, Abstract Thoughts.

Abstract Thoughts with works by Jenny Ashley, Allen Cox, Jordan Hockett, and Burl Vreeland shows through March 29 at Studios on the Park. You can check it out virtually at studiosonthepark.org/events/abstract-thoughts or in person at 1130 Pine St. in Paso Robles. Pandemic hours are Monday, Wednesday, Thursday, and Sunday from noon to 4 p.m. and Friday and Saturday from noon to 9 p.m.

Deep blues, vintage yellows, bright reds, and '70s beiges talk to one another at Studios on the Park.

Images imposed on reclaimed wood with spray paint. Geometric patterns in shades of mustards, teals, and brown. Oil paint and wax layered into shapes and words. Women photographed in vintage settings with lampshades on their heads. The works of Burl Vreeland, Jordan Hockett, Allen Cox, and Jenny Ashley (respectively) are diverse in the Paso gallery's latest exhibit, Abstract Thoughts, but the colors and patterns in the pieces bring it all together.

"It turned out to be a really cohesive and nice show in spite of the variation and mediums that everybody is doing," Cox said. "They really speak to each other and it really elevates everyone's work to have that conversation about color."

Cox, who has been a professional artist for 40 years, said he started his career as a straight-up abstract painter. But he's evolved over time, and now he works with images that are based on actual forms—natural forms, plants, stone formations, landscapes, atmosphere—and creates images that are abstract with recognizable shapes.

"A lot of my original ideas about doing abstract painting were based on some of my own life experiences, in that I studied archaeology before I went to art school and worked in Oregon for 10 years [as an archaeologist] while I was teaching myself to paint on the side," Cox said. "Ancient artifacts have this character that comes with great age."

They are chipped and cracked, faded and worn, missing the luster that newness comes with. So he used that as inspiration to hone his craft, layering his paintings with dense bands that are reminiscent of "archaeological stratigraphy." One of the pieces in Abstract Thoughts, Enlightenment, has a vintage or antique feel to it, with a textured base layer and a patterned image that looks to be an old spoon radiating light.

"I'm sort of using things that I was actually familiar with as models to develop painting. ... There's always something new," he said. "My work has its own distinctive textural quality and color."

Ashley's photographs also have their own distinct quality and feel to them. She hones in on patterned wallpapers and vintage dresses, furniture, and more to create the scenes for her pieces.

"My creative process was all about colors and finding ... creating some sort of scene where there was this highly decorative scene where the woman becomes a decoration," Ashley said. "A lot of it was about costumes and coming up with a set, and matching a dress with the wallpaper so she blends into the background." 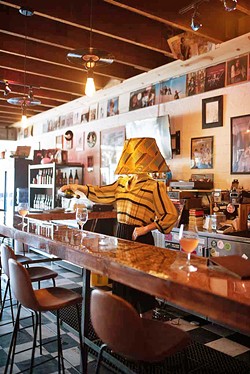 The scenes in her Lampshade Project photos are familiar with some scenes shot at the Madonna Inn in SLO and the Raconteur Room in Atascadero.

Ashley started the project in 2017, inspired by local artist Jami Ray's installation work at the time. Ray did an installation of herself with a lampshade on her head, surrounded by drab '80s colors of grays and beiges. After Ashley saw the installation, she couldn't get the image out of her head. She had to photograph it, so they collaborated.

"She modeled for me and I kind of did my own interpretation of it, but through photography," Ashley said. "And then, just with her blessing, just kind of took it in that direction with photography."

Initially, Ashley said, she didn't really know what it was about the image that haunted her. As she started working with it more and more, she had to figure out why she was obsessed with that particular scene.

The faces of the women in the photographs are covered, which basically takes their identity away from them. Lampshade Project photographs evoke the sense of a woman being in the home, being put in her place, and not being valued for anything other than domestic pursuits and being quiet.

"It really was, for me, it was a breakthrough. I was working through my own, you know, kind of struggles and my own identity and why I should be valued and where to find my own voice," she said. "And the photographs became a way for me to be seen."

You can see Ashley's photographs and Cox's layered work alongside art from Hockett and Vreeland through March 29. To view the show virtually, check out Studios website studiosonthepark.org or you can visit the Paso studio in person. Δ