Co-writer/director Thomas Vinterberg (The Hunt) helms this story about four friends, all high school teachers, suffering various levels of midlife crises. They decide to test a theory that human beings are born with an alcohol deficiency, and that they're at their optimum if they maintain a .05 blood alcohol content. It's nominated for Best International Feature Film and Best Achievement in Directing at this year's Academy Awards. (In Danish and Swedish; 117 min.) 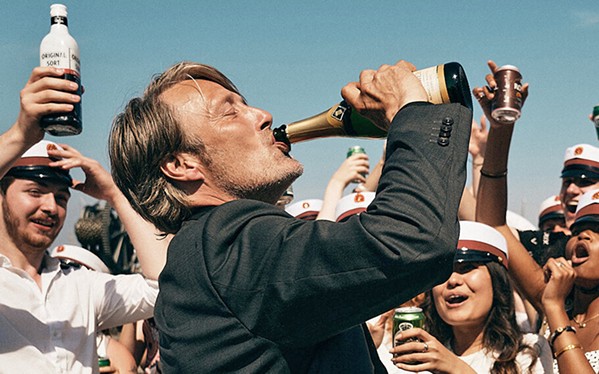 Glen This film really had me pining for The Palm Theatre. It's exactly the sort of film Jim Dee would champion and screen at his Palm Street art house theater. It centers on Martin (Mads Mikkelsen), a high school teacher in whom students have lost interest. In short, the formerly charismatic history instructor has lost his mojo. He and his wife, Anika (Maria Bonnevie), have lost their spark. He seems to get no joy or even satisfaction from life. Out for dinner one night with friends and fellow high school teachers to celebrate Nikolaj's (Magnus Millang) birthday, he, Tommy (Thomas Bo Larsen), and Peter (Lars Ranthe) discuss psychiatrist Finn Skårderud's theory that humans are at their most relaxed and creative when they have a blood alcohol content of .05. The group dismisses the theory, but Martin, feeling desperate, decides to test the theory and begins drinking at work. The results speak for themselves. His students are again engaged in his lectures, and his wife and family see a renewed and more compelling Martin. Soon his friends decide to join his experiment, with similar results, but before long, they decide to expand their theory to higher BAC. Humor and drama ensue.

Anna This was a fun one, and you're totally right that this has Palm vibes all over it. I can't wait for that theater to open back up! This is a romp through the insanity that ensues when you live life a little tipsy. Unfortunately, alcohol isn't always an easy beast to control, and when the group ups their booze level, the consequences also expand. Most people feel a little looser after a cocktail or two. It can make you more social, more creative, more willing to take risks—for better or worse. That's exactly what happens to this group of dudes, and at first it seems like everything is working out great. Unfortunately for the group, the old adage of "I can drink or I cannot drink, but I can't have just one drink" becomes a problem, especially for P.E. coach Tommy, an affable and funny guy who lets getting boozy get the best of him. The acting in this is great, and it's charming and funny and doesn't shy away from having fun while also having a bigger, more serious overall message. If you don't mind subtitles (or speak Danish/Swedish), this is a great one to catch, and it certainly earned its Oscar nominations.

Glen Its ending definitely sends a mixed message, but that's one of the things I like about foreign films: They don't feel the need to tie up every loose end or offer a clear resolution like most American, Hollywood, or mainstream films. I was also surprised by the film's depiction of the culture. When Martin's students become annoyed by his lackluster teaching, they and their parents call a meeting sanctioned by the school to confront him. Students clearly have a lot more power in Scandinavia than they do here. Martin also seems to take this in relative stride. Instead of getting defensive, which I imagine most teachers would, he spends little time suggesting the students and their own work ethic and disinterest may also play a part. When he starts drinking, he really comes alive, and his lessons are clever and engaging, and he's clearly reveling in the interest he's sparking in his students. There are moments of real joy in this film, especially one in which Tommy's coaching leads to a huge breakthrough for his wimpiest player. There's also tragedy. Alcohol can be insidious in the wrong hands, and alcoholism is a progressive disease. Drinkers may think they have control now, but Another Round shows just how precarious that thought can be.

Anna I'm glad the film had its fun but also conveyed the message that drinking can and will mess everything up if you aren't honest with yourself about your relationship with it. We've all probably seen disaster come from overindulgence, and alcoholism is a tragic disease to lose someone to. I agree that it's refreshing to watch foreign films for the fact that they don't rely on a Hollywood ending. It lets them be real, introspective, and dynamic. I haven't heard anyone talking about Another Round. It may be that its accolades haven't made their way to mainstream America yet, but this is available on streaming services a ton of people have, so it isn't hard to seek it out, and in my opinion, it's totally worth it. Martin is a wonderful protagonist, not unflawed but a seemingly standup guy who just has worked himself into a rut with his kids, his wife, and his life. A little bit of a wakeup call was definitely in order. Does that mean teaching while drinking is A-OK? Well, no. But this film argues that a little spark, from wherever you get it, can be a lovely reset. Just don't dive into the deep end; it's too easy to drown down there. Δ