Accusations fly in wake of bankruptcy

"We just had to stop the hemorrhaging," Los Osos Community Services District (CSD) director Dan Bleskey explained of his office's Aug. 25 decision to file with a bankruptcy court in Santa Barbara. 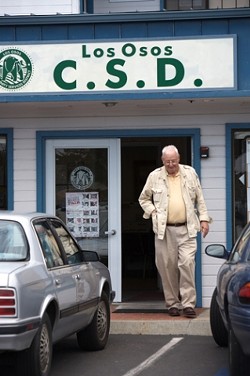 # Bankruptcy rumors had been swirling since July, but the body remained hopeful that it could reconcile its finances enough to squeak by into solvency for now at least. However, a hefty bundle of liability ultimately proved too much to handle, and one of the largest public bankruptcies in California history was born.

"Things turned out a little different than we anticipated," Bleskey bemoaned.

CSD staff made assurances that the bankruptcy won't precede an insolvency that, almost certainly, would pass all liabilities on to county taxpayers.

While the CSD promised its ratepayers that nothing would change in terms of services offered, in the ongoing and already thoroughly epic saga to establish wastewater solutions for the community, virtually nothing remains the same.

First and foremost, the move will stay a barrage of lawsuits from ticked-off contractors and local taxpayer advocates though many of the latter still assert that bankruptcy doesn't protect individual board members from legal action for allegedly squandering public funds. Second, bankruptcy formulates a structured timetable for the repayment of existing liabilities. Finally, the official passing of the buck on to Mr. and Mrs. Californian opened the door for various parties to sling blame for running up the check.

A blizzard of e-mails among players in the Los Osos sewer debate hurled blame as far back as 1998, when members of the so-called Solution Group campaigned and brought the controversial Tri-W site, a candidate for the treatment-facility location, to the table. Some accusations proved incredibly broad. Others cited specific events. Three indictments in particular stood out:

"In 27 years of failure, there's one common denominator, and that's the current director of the Regional Water Quality Control Board," Bleskey said. "All the other players have changed."

The current incarnation of the CSD board blamed Briggs for stifling proposed solutions such as the effluent collection system and for allegedly suppressing data questioning the true nitrate contamination of the upper aquifer.

The director was unavailable for comment, but has argued in the past that the water board issued fines not for the nitrate contamination, but for the delay of the sewer. Regarding the allegedly suppressed reports, water board staffer Matt Thompson told New Times earlier in the summer that the two studies in question were not peer-reviewed.

Following the recall, the reshaped board constructed a plan to alter the collection system in place and build the treatment plant, previously slated for the centrally located Tri-W lot, out of town. The board planned to use a State Revolving Funds (SRF) loan to finance the project. Cantu swept in late in October to strike down the proposal, which stalled the project and killed the loan.

"It was one of the most egregious moves I've ever seen by a bureaucrat," Bleskey said.

"You can't have an SRF if you don't have a project they didn't have a project or a funding source," state water board communications director William Ruckeyser responded. "We're simply not in a position to alter loan conditions."

Inspector General chief Michael Lauffer reported last winter that the government body had no other legal form of action but to revoke the loan.

3. Gordon Hensley and his fellow recalled CSD board members

"Excellent legal advice and administrative guidance," Hensley argued in response to allegations that the former board sent checks to contractors before SRF terms legally allowed them to.

Nevertheless, current board member Julie Tacker claimed that officials, in their rush to get the project moving before the looming recall, broke code in the disbursement of almost $6 million in SRF funds. The chief recipient of the purportedly improperly distributed bills: international engineering firm Montgomery-Watson. That corporation remains entangled in litigation with the CSD and recently was sent a notice that the district may choose to terminate the existing contract on the grounds of various violations.

Bureau chiefs at Montgomery-Watson's North American office did not respond to interview requests as of publication.

"There was no impropriety in what happened," former board member Hensley added. "That whole argument is a smokescreen to cover the real issues."