Ace Frehley of KISS plays the Fremont Theater on Aug. 8

Music fans either love KISS or they're wrong, and there would be no KISS without Paul Daniel "Ace" Frehley, who's known to play custom special effects guitars, such as a Gibson Les Paul that emits smoke. KISS and Frehley understood from the start that rock 'n' roll is a spectacle, and they wrote the book, playing in outlandish costumes under iconic face makeup. 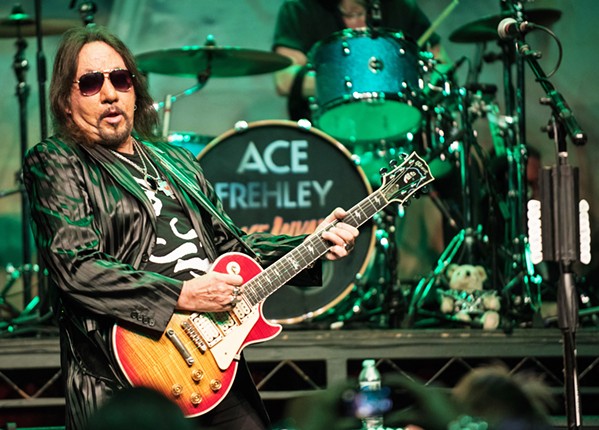 Frehley developed his Spaceman or "Space Ace" persona during his KISS years (1973 to 1982, 1996 to 2002), and together the band was monstrously huge in the metal and glam rock scene, with levitating drum kits, pyrotechnics, blood spitting, fire breathing, and more. Yes, KISS is still together, but without Ace, they're not the same.

Frehley's successful solo career has been a lot less flashy. He called his band Frehley's Comet, and he eventually signed to Megaforce Records, releasing the eponymous Frehley's Comet in 1987. The album's mix of rock and pop metal propelled it to No. 43 on the Billboard 200.

While his solo albums haven't reached the heights of his KISS years, they've been solid entries into his oeuvre, and 2016's Origins, Vol. 1—a covers album with songs by The Stones, Cream, Jimi Hendrix, and others—was very successful, reaching No. 23 on the Billboard 200 chart. There's a new Frehley album rumored to be in the works.

Ace Frehley plays the Fremont Theater on Wednesday, Aug. 8 (8:30 p.m.; 16-and-older; $35 to $55 at Boo Boo's and eventbrite.com). Don't miss your chance to see this Rock and Roll Hall of Famer shred on guitar like no one else. As he's noted repeatedly, he's never had a guitar lesson, doesn't know how to read music, and his technique is unorthodox, yet he's one of the most famous guitar players in the world.

I also hear he's joining his former KISS bandmates in late October 2018 for the KISS Kruise VIII (thekisskruise.com), but when I last checked, the Oct. 31 through Nov. 5 cruise was sold out. Join the waiting list and dare to dream!

Also this week at Fremont, see metal act Y&T on Saturday, Aug. 4 (8 p.m.; all ages; $25 at Boo Boo's and eventbrite.com). "Before Mötley Crüe, before RATT, even before there was a Metallica, Y&T was slogging away in sweaty rock clubs around America," their band bio notes. "When the band formed in the early 1970s, little did they know they would set the standard for hard rock bands that trailed. Many of the biggest acts of the '80s became popular opening for headliners Y&T—and cut their teeth on the band, as evidenced by the Y&T mentions in tell-all books by acts

such as Metallica and Mötley Crüe." 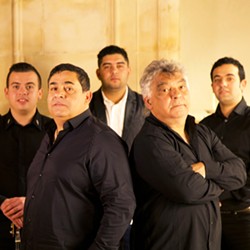 Though born in France, the group members were born of gitanos parents—Spanish gypsies who fled Catalonia in the 1930s to escape the Spanish Civil War. Originally calling themselves Los Reyes (The Kings and Nicolas' last name), the band brought rumba, flamenco, and salsa to audiences worldwide when they got their commercial start in 1973.

The band has always been a family affair, with brothers Nicolas and Andre Reyes teaming with cousins Jacques, Maurice, and Tonino Baliardo. Now the sons of core members Nicolas and Tonino have joined the band.

"Melding deep-heated flamenco, rumba, salsa, and pop to the tune of 20 million albums sold, the Grammy Award-winning hit-makers behind 'Bamboléo' continue to celebrate in their very own, blistering tradition.

"Uniting the family Reyes and the family Baliardo, the band continues a tradition that has drawn famous fans such as Picasso, Cocteau, Dali, and Chaplin," their bio reads.

Even if you think you're unfamiliar with the band, their music has appeared in the animated film Sing as well as The Big Lebowski, Toy Story 3, and Glee.

Numbskull and Good Medicine Presents have two hot shows this week, starting with reggae acts Raging Fyah and Rebel on their Summer Tour 2018, which will stop at The Siren on Saturday, Aug. 4 (8 p.m.; 21-and-older; $14 at Boo Boo's and ticketfly.com), with special guests RSB.

Jamaica's Raging Fyah is hot right now, a Kingston-based quintet that formed in 2006 and has been steadily building a reputation as an authentic roots rock act. Each of their three albums—Judgement Day (2011), Destiny (2014), and Everlasting (2016)—have improved upon the previous one. The band also entered the legal marijuana market, linking with Elite Organics of Colorado to market Raging Fyah's Everlasting Kush. Anyone know where I can lay my hands on some? Asking for a friend.

Innovative jazz act The Charlie Hunter Trio plays The Siren on Sunday, Aug. 5 (6:30 p.m.; 21-and-older; $25 presale at Boo Boo's and ticketfly.com). With nearly 20 albums under his belt and collaborations with the likes of Norah Jones, Mos Def, and John Mayer, Hunter is the master of the seven- and eight-string guitar, on which he plays both guitar and bass parts. He's wild!

The Siren also hosts El Twanguero this Friday, Aug. 3 (doors at 8 p.m.; 21-and-older; $10). The Spanish guitarist Diego "Twanguero" Garcia has since relocated to L.A., where his ripping mix of flamenco, rock, blues, and surf guitar is lighting up clubs. The newest album for this two-time Latin Grammy winner is Electric Sunset, which won Best Album at the Spanish Independent Music Awards. Check him out online. He's awesome!

Santa Cruz-based indie-rock singer-songwriter Henry Chadwick, not to be confused with the dead "Father of Baseball" Henry Chadwick or the dead theologian Henry Chadwick but instead the quirky musician behind songs like "Bag of Chips" and "Wrong Way," is coming to Frog and Peach this Thursday, Aug. 2 (8:30 to 11:30 p.m.; 21-and-older; free). He reminds me a bit of Little Wings.

The fifth annual Hot Summer Soul Show happens this Saturday, Aug. 4, in an idyllic setting on a private estate in a wooded canyon near Lake Lopez at the Paradise Canyon Ranch (1500 Big Baldy Way), where you can hear Burning James and the Funky Flames, The Jill Knight Band, and the gospel and soul of Burning, Bad & Cool (4 p.m.; all ages; $20 presale at brownpapertickets.com, $25 at the gate). 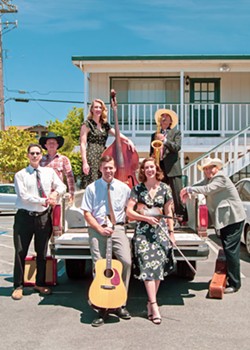 The Sunset Winos, formerly known as the Starfuckers, will play Rava Wines in Paso Robles this Saturday, Aug. 4 (6:30 p.m.; 21-and-older; $20 to $30 at my805tix.com). The all-star jam band features members of KISS, Guns N' Roses, Alice Cooper, and more. "On any given night, you could be witness to a raw performance by Axl Rose, Billy Idol, Slash, Brain May, C.C. DeVille, Lemmy, or even Jimmy Fallon," according to press materials.

Ethereal folk-pop act Shadowlands just released two new singles, and they're stunners. I especially like the atmospheric and mysterious "The Wilderness," but you can hear both singles on the band's website (shadowlandscalifornia.com). This Saturday, Aug. 4, they'll play Branch Mill Organic Farm and Retreat Center (doors at 2 p.m.; music from 3 to 5 p.m.; all ages; $15); and next Friday, Aug. 10, at Tooth & Nail Winery (5:30 p.m.; all ages; free). Four talented musicians, three of whom are amazing songwriters—this is truly one of the very best groups on the Central Coast. Δ