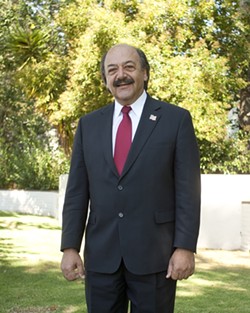 California still can’t prosecute as rapists people who trick an unwilling partner into sex through impersonation, unless the perpetrator is posing as the victim’s spouse.

Assembly Bill 65 seemed poised to close the rape-by-fraud loophole on July 11 when the California Senate scheduled a third and final reading of the bill. Instead, legislators delayed a vote on AB 65 until after the summer recess, which started July 12 and lasts until Aug. 12.

Letters and e-mails acquired by New Times tell the story of a dispute between Achadjian and Evans over the language of early bill versions. The senator criticized AB 65 as too broad during a Feb. 26 committee hearing, but later adopted the same wording when several county district attorneys spoke up in favor of Achadjian’s version.

“It would have been on the governor’s desk,” Achadjian said. “I never thought I would see this happen. It’s very upsetting.”

New Times couldn’t reach Evans before press deadline, but spoke to the senator’s press secretary, who seemed skeptical that the authorship dispute kept AB 65 from a vote before the recess.

Achadjian introduced a bill in 2011 to close the rape-by-fraud loophole, but it died in committee due to a now-extinct legislative policy to pass inmate-neutral laws. A decision to overturn a Los Angeles rape conviction in 2012 made the issue a national headline and prompted several legislators, including Evans, to introduce bills this session.

Achadjian says he agreed to split his bill with Evans at the personal request of Senate President Pro Tem Darrell Steinberg (D-Sacramento). Nevertheless, he sent a terse June 13 letter to Evans over her decision to continue pushing SB 59 despite the fact that both bills now use the language she once criticized as overly broad.

“I believe your decision to move forward with a measure containing language taken directly from my AB 65 … will reinforce the notion that the Legislature cannot come together to address important issues,” Achadjian wrote.

Evans chaired the California Legislative Women’s Caucus before the election of Assemblymember Bonnie Lowenthal (D-Long Beach) to that post in January. Lowenthal signed on as a co-author of AB 65, but the caucus currently endorses both bills. As amended after the dispute, each bill would individually close the loophole only for certain sexual acts.

Achadjian expects both to pass, but he finds the delay and intrusion unjustifiable.

“There is no law against it, but common courtesy and personal ethics should have stopped her,” remarked Achadjian, who stopped himself from making an over-the-top metaphor. “I feel like my rights have been violated.”