Communication studies junior Ashley Lekkerkerk gifted each of her roommates with a long handwritten note and small buckets filled with their favorite candy. She wanted to let her roommates know how much she appreciated them and how thankful she was to have them in her life.

Other students helped elderly individuals carry their groceries, made home-cooked meals for their roommates, bought coffee for a stranger, or even refilled an expired parking meter. 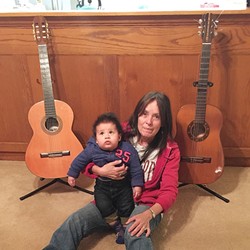 These good deeds were all part of a take-home quiz that students had to complete while enrolled in classes such as Introduction to Hispanic Readings and Humanities in Chicano/a culture at Cal Poly.

Taught by Dr. Gloria Velasquez, these classes incorporated a slight twist that isn’t normally part of curriculum. In addition to the acts of kindness quizzes, Velasquez also leads meditation sessions as a way for students to relax.

The lights are turned off, books are closed, and everything is cleared from the table. While Native American flute music fills the room, students take three deep breaths and meditate for the next three to five minutes. Her classes this quarter have been filled with graduating seniors and engineering students, who have told her they wished other professors would incorporate meditation into their curriculum.

“With the rise of social media and technology, students undergo more stress,” she said. “That’s another reason why I wanted to do the meditation, to get them to relax.”

Dr. Gloria Velasquez has taught at Cal Poly for 31 years, and will retire after this academic year is over. She is the first Chicana professor ever hired on campus and teaches Chicano Studies in the Modern Languages and Literatures department.

Velasquez graduated from Stanford University with a Ph.D. in Latin American and Chicano Literature. She is the author of the Roosevelt High School Series and has been featured in two PBS specials, including “Soldados: Chicanos in Vietnam” and “La Raza de Colorado.” As a published fiction author and poet, Velasquez’s life has been archived at Stanford University as “The Gloria Velasquez Papers.”

“I always pride myself in not having that ego that goes with academia. … Even though I went to Stanford, I’ve never changed. I’ve always wanted to retain who I am and my identity as a woman of color,” Velasquez said.

Velasquez grew up in a farmworker family in Loveland, Colo. She met Rodolfo Gonzales, a political activist in Colorado, when she joined the civil rights and cultural movement called the Crusade for Justice. She also met civil rights activist Cesar Chavez while attending Stanford, and became involved with the United Farm Workers of America.

In addition, Velasquez considers herself to be a very spiritual person. She incorporates that spirituality in her teaching methods and uses it to express herself. During her final quarter at Cal Poly, she wanted to use the quizzes and meditation to give back to her students and help them become more compassionate.

“With my students, I always say every quarter, ‘You must give back to your community and to society.’ … In order to be able to give back, you must have compassion,” Velasquez said. “If you just think of yourself, you’re not being compassionate.”

After Velasquez retires this year, she hopes that professors in the future will incorporate meditation and the acts of kindness into their classes as well.

“Given the times that we’re living in, with the fear, the hatred of anything that’s different, it became even more important to have students write and be kind,” she said. “I always tell students to be compassionate and to be kind.”

• The Mortgage House in SLO awarded $1,000 each to three nonprofits—Transitions-Mental Health, SLO Womenade, and the 5 Cities Homeless Coalition—from its community fund. To learn more about the community fund, call (800) 644-4030 or visit themortgagehouse.com.

• Students from Paulding Middle School raised more than $8,000 for the National Multiple Sclerosis Society, Project Surf Camp, and 17 Strong through the Burpees for a Cause fitness challenge this year.