Co-writer James Gray (The Lost City of Z, The Immigrant, We Own the Night, The Yards, Little Odessa) directs this sci-fi mystery about astronaut Roy McBride (Brad Pitt), who's recruited to venture into space in search of his father, Clifford McBride (Tommy Lee Jones), who 30 years earlier underwent a space mission of his own that was thought to have been doomed. Now bursts of anti-matter threaten Earth, which appear to be coming from the senior McBride's Lima Project, last heard from 16 years earlier in orbit around Neptune. (124 min.) 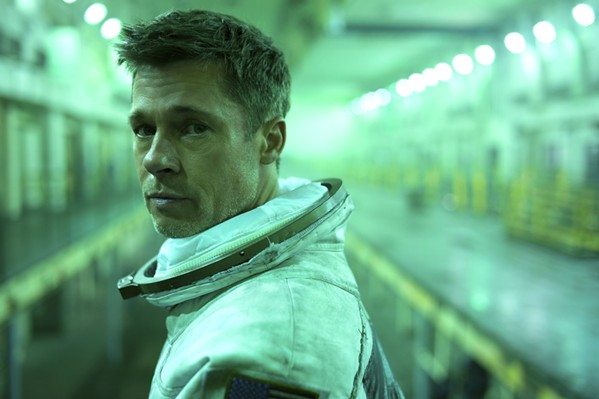 Glen I couldn't help but see the obvious parallels between this story and Apocalypse Now (1979), or if you'd like to go back further, Joseph Conrad's 1899 novella Heart of Darkness. Pitt's Roy McBride is the Capt. Willard/Charles Marlow character sent on a dangerous mission to stop a rogue agent, and Tommy Lee Jones' Clifford McBride is Col./Mr. Kurtz, the former heroic and loyal part of the team who's apparently gone mad. Pitt's narration further recalls Martin Sheen's narration as Willard in Apocalypse Now and his thoughtful analysis of Kurtz and what caused him to drift into insanity. As for Jones' Clifford, his obsession is with finding intelligent life outside the solar system. From Neptune, the outer-most planet in our solar system, he should be able to send and receive unobstructed signals from deep space. Surely intelligent life is out there. The film explores humanity's place in the universe and our penchant for self-destruction. The colonized moon is both a fought-over mining resource and a tourist destination preyed on by pirates. Roy is a fearless and impossible-to-rattle explorer who's so closed off to his own emotions that he's doomed his marriage to Eve (Liv Tyler). Essentially, Ad Astra is an existentialist quandary. Are we alone in the universe? Can we really make a true connection with anyone or anything? If these questions interest you, and if you can settle in to this mesmerizing but often slow and contemplative film, you just might love it. On the other hand, if you're expecting Star Wars or Star Trek, you'll be sorely disappointed. Ad Astra is a meditation on loneliness.

Anna Lonely is the right description. This film is both beautiful and achingly desolate. The narration provides the bulk of the spoken word, and intermixed with the images of vast space, it creates a numbingly distant reality. The younger McBride is something of an enigma—driven but melancholy, and whose super low resting heart rate makes him ideal for space travel. Devoid of emotional attachment, the two McBride men are mysterious. After all, his father has been absent for many years, yet Roy's determination is unbending. Told through the narration and through flashbacks, the dissolution of Roy's marriage lends another piece of the puzzle to this complicated character. I get why this one may not be an audience favorite. In fact, the word "boring" was thrown around by some fellow theatergoers while we were there. However, I found it visually very captivating, and the slow narration and introspection were equally engaging. It's a film meant to be seen in the theater and I'm glad I did—I was transfixed by the isolation director Gray was able to create with Ad Astra. 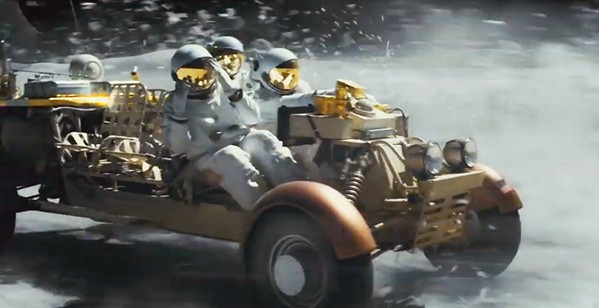 Glen I guess if you thought Stanley Kubrick's 1968 masterpiece, 2001: A Space Odyssey, was boring, you might find Ad Astra boring. It's a slow burning film, and there are really only two true "action" sequences in it: one that you see in the trailer as some vehicles race through the lunar landscape exchanging gunfire, and another that happens late in the film on the way to Neptune, which sends the story down an unexpected side plot. Most of the film lingers on close-ups of Pitt's face and his internal dialog, and for a character whose main characteristics are calculating dispassion and calm under fire, Pitt is remarkable at communicating small emotions. Roy questions himself constantly. He's committed to the mission but frequently examines his priorities, lamenting over his inability to connect with others. His father is a hero who he barely knew. Is he like his father, who abandoned his wife and son for a mission to contact alien intelligent life? Roy doesn't really know himself. He's single-minded, always prepped for his next psychological evaluation to determine if he's fit to continue the mission. The irony is that his emotional detachment, which is clearly unhealthy, is what makes him "fit." I was fascinated by the film, by Pitt's subtle performance, and by the philosophical and existential questions it explores. Compared to the vastness of space, a single human being seems astonishingly insignificant, but like space itself, the interior life of a person can also be vast and deeply complicated.

Anna Pitt is a force in this film. More is said through what he emotes than what he actually speaks. It's not an action flick or space adventure, instead a very finely tuned character study of Roy. He may be the best at what he does, but being content within himself proves elusive. When the trailer for Ad Astra came out, I wasn't sure what to expect. It looked like an amazing film visually, but the plot line seemed mysterious. It all added up in the full-length film, luckily, and was not just stimulating for the senses but presented a truly complex character. Being inside of his head through the narration is so fascinating, and the internal struggle with every choice is intense. It's technical and ambitious, and director Gray has a knack for both grand-scale visuals and small human moments. I am wholly impressed by Ad Astra and encourage those with even an inkling of interest to catch it on the big screen. It really is impressive. Δ