Since January, Arizona resident Robert McCarthy has filed a total of 14 separate lawsuits against SLO County businesses in Cambria, Morro Bay, Los Osos, and other small towns, alleging that their facilities didn’t meet accessibility standards under the Americans with Disabilities Act.

McCarthy, who’s listed as a sex offender in Arizona’s state database, filed the first slew of those lawsuits against six local businesses in late January. Those businesses included the Clubhouse Sports Bar in Los Osos, the Best Western El Rancho hotel and Bay View Inn in Morro Bay, Morro Bay Market and Sprits as well as the Creekside Inn in Cambria and Bay Laurel Nursery in Atascadero. 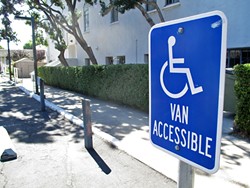 After those initial lawsuits were dismissed or settled, McCarthy filed another eight lawsuits against more businesses in late August and in late September. Defendants in those cases included the Breakers Motel in Morro Bay, the Shoreline Inn in Cayucos, and five other businesses in Cambria.

Each lawsuit, filed by San Diego-based lawyer David Wakefield, stated that McCarthy was denied equal access to businesses and includes a laundry list of alleged ADA violations. For instance, the alleged violations recorded by McCarthy at Linn’s Restaurant in Cambria included the curb ramp to the facility being too steep, the lack of an international symbol of accessibility signage on the front door, and the toilet in the restroom being 19.5 inches from the sidewall, among others. McCarthy said the barriers to equal access he experienced at the Breakers Motel in Morro Bay included the check-in counter being too high, the lack of a fixed seat in the motel room shower and an entry door requiring a metal key that was “difficult to twist,” according to the lawsuit.

In each lawsuit, McCarthy claims that he plans to return to the businesses.

Such lawsuits aren’t uncommon in California, a state that allows litigants in ADA lawsuits to seek $4,000 per-violation if they go uncorrected. The law doesn’t require the businesses be notified of the violations or give them time to fix them before they are sued. California Citizens Against Lawsuit Abuse claim that about 42 percent of all ADA lawsuits in the country are filed in California.

“The abuse of ADA isn’t new,” said Maryann Marino, regional director for the group. “The law allows for these exorbitant fees.”

Marino said the group of individuals who serially file ADA lawsuits in the state is small, between 15 and 20 people. But some are filing as many as 80 lawsuits at a time. In many cases, businesses are able to settle the lawsuits, but at a cost of thousands of dollars.

No city knows this better than Cambria. Businesses in the small town make up 50 percent of 14 lawsuits McCarthy filed this year. This isn’t the first time Cambria businesses have been slammed with ADA lawsuits either. Ten years ago, between 10 and 12 businesses in the town faced lawsuits from one Jarek Molski, a self-styled “ADA Sheriff.” Molski became notorious filing 95 lawsuits against businesses from Santa Ynez to Paso Robles between 2003 and 2005. According to reports in the Los Angeles Times, Molski filed more than 400 ADA lawsuits in the state of California.

Mary Ann Carson, director of the Cambria Chamber of Commerce, said she hadn’t heard of the most recent lawsuits from McCarthy and his lawyer, but remembered the impact of Molski’s lawsuits a decade ago.

“[Molski] caused a lot of trouble,” she said. “It was devastating for some of the businesses here.”

Molski’s chunk of lawsuits ended when a federal judge branded him a “vexatious litigant” in 2005, effectively barring him from filing any more lawsuits.

While some people might think that Molski and McCarthy are individuals who abuse California’s ADA compliance laws for profit, both have made the argument that they are simply holding businesses accountable for complying with the law and fighting for equal access. In a written response to questions from New Times, Wakefield, McCarthy’s lawyer, didn’t address his client’s lawsuit specifically, but argued that ADA laws, and California’s in particular, allowed private individuals to sue and force businesses to comply instead of the federal government doing so, saving taxpayer dollars.

“With that method, the cost of enforcement is borne by those defendants who are in violation of the law and the cost is not forced onto everyone else,” Wakefield wrote. “The news coverage never addresses the true purpose of the ADA lawsuits but only portray the ADA lawyers and their clients in a very negative way.”

Wakefield also implied that the negative coverage ADA lawsuit clients get far outweighs the actual number of suits filed, which he said made up just 2,100 of California’s 8.5 million lawsuits between 2012 and 2013.

“Statistically, only 0.02 of 1 percent (2/100ths of 1 percent) of all cases filed involved disability access,” he wrote. “It is baffling why the news focus is on disability plaintiffs, when it is the business community that has failed to comply with the access laws.”

While the past lawsuits strained Cambria’s small businesses, Carson said they did make the community take a look at ADA accessibility at its businesses and facilities.

“It cost a lot of businesses a lot of money, but it did raise awareness about those issues,” she said. “We do aim to be compliant with the laws.”

A bill sitting on Gov. Jerry Brown’s desk could offer some small relief to the noncompliant businesses that are potential targets for ADA lawsuits.

The bill, which passed the California Assembly and Senate earlier this year, would allow any small business 15 days from the date of written notice or lawsuit to correct certain ADA violations without facing penalties. The violations covered are limited to minor issues, such as signage, parking lot paint, and truncated domes—the patches of raised bumps between the sidewalk and street. The legislation would also give businesses 90 days to correct any violations found during an inspection by a certified access specialist without penalty.

According to its website, California Citizens Against Lawsuit Abuse supports the measure but noted that it didn’t go far enough.

“Does it go as far as we would like? No, but it will certainly go further than any previous legislation,” the statement read.

As of Oct. 7, the governor had not signed the bill.