To call Emma Duncan precocious would be an inaccurate—not to mention, slightly insulting—description of the 17-year-old actress. Well- spoken, and very aware of what she wants might be better descriptive terms. 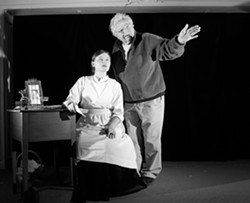 For her senior thesis, Duncan decided to stage and star in a production of The Belle of Amherst, the one-woman show about the life of poet Emily Dickinson.

“I wanted to do something to test my limits as an actor,” she explained. “It’s an 80-page monologue. It was a curiosity thing. The tone of the project was ‘let’s jump off a high ledge and develop the wings on the way down’.”

After a successful initial staging, Duncan sent a CD of her performance to Jim Buckley, proposing that the show run at the Pewter Plough Playhouse during the summer. Buckley passed the CD along to board member, and mostly-retired actor Nehemiah Persoff, who insisted that Buckley schedule a meeting with Duncan.

Eighteen years ago Persoff retired from his acting career, which spanned more than 40 years, in Cambria. He instead devoted himself to watercolors. Playhouse owner Buckley, convinced Persoff to serve on the board of directors, primarily in order to wrest Persoff away from his paintbrushes and into the theater. This tactic has met with some success; in 2005 Persoff directed A Shot in the Dark, in addition to directing readings of Reclining Figure and Some Time Next Year. But Persoff didn’t have any intention of being heavily involved in the theater’s 2008 season. That is, he didn’t until he saw Duncan’s senior thesis performance in The Belle of Amherst.

“She had a stage presence. She owned the stage,” said Persoff, who was sufficiently convinced of her abilities to come out of retirement to help polish her performance. “I told her that if I worked with her there would be changes made. It would not be easy. I told her you have to expect that. And she said ‘let me think about it a minute’ and my heart sank because I wanted to work with her very much by that time.”

He needn’t have worried, because Duncan quickly came to the conclusion that Persoff’s terms were acceptable, not altogether surprising considering that, by the age of 11, she had determined that acting was her calling in life. At the age of five, while dancing the role of a flower in a ballet version of Peter Pan, Duncan was outraged when several of her fellow performers entered the stage before their cue. But it was as an 11-year-old, while watching a production of A Midsummer Night’s Dream at the Oregon Shakespeare Festival, that Duncan was committed to the stage. She describes, vividly, a moment when Puck takes the stage, sitting in a lighted chair.

“It was decisive,” she recalls. “I thought ‘that, right there, what that guy is doing. That’s what I want to do for the rest of my life’.”

Her Muse—whom some might consider over-active—even drove her to cut out the yard at her house to make space for a performance venue. Duncan had her parents’ permission to commit the act of destruction, which she credits to “some bizarre fit of compliance.” She directed an abridged version of Romeo and Juliet there, performing the role of Mercutio herself.

At the conclusion of the month-long run of The Belle of Amherst—which ends July 27—the Cambria resident will pack her bags in preparation for her first year at Sarah Lawrence College in New York. The young actress acknowledges that part of the college’s appeal—besides its reputation for providing a quality liberal arts education—is the campus’ proximity to Broadway, where she plans to one day perform. While Persoff is full of dire warnings about the harmful influence an acting teacher can have on a student, he is also certain that Duncan will achieve her goal. And Persoff isn’t someone who’s very likely to overestimate talent; having worked with the likes of Martin Scorsese, Marilyn Monroe, Marlon Brando, and Barbara Streisand, he is not easily impressed.

It must be said that, while Duncan has undeniably made an impression upon Persoff, the play itself is a reservoir of inspiration for the actor, as well. Persoff is quick to cite his opinion that television has degraded American taste and culture, in particular citing, “women gossiping with innuendos of sex and comedians that constantly grab their crotch and Britney Spears or Paris Hilton.”

For Persoff, celebrating Dickinson’s poetry—and life—is a way of counterbalancing the vulgarity of modern culture.

“If you feel, as I, that idealism of youth has been trampled over the years, you owe it to yourself to come here and get a shot in the arm of heartfelt emotion,” he said.

“It’s a tonic against sensationalism,” added Duncan. “Its subject matter is elevating. William Luce said The Belle of Amherst is a celebration of all that is beautiful and poignant in life. It really is beautiful in that way. The whole thing is sort of a hymn to the craft of writing.”

Luce originally wrote the now 32-year-old play specifically for Julie Harris, who was 51 the year she first starred in the production. The way the show was written, Harris played a middle-aged Dickinson, at times acting as a younger version of the poet. Duncan will be approaching the play from the opposite spectrum, performing as the younger Dickinson, while pretending to be older for particular reminiscences, and dialogue.

In order to prepare for the role, Duncan, who counts herself as a fan of Dickinson, read the poet’s poems and letters, along with several biographies. From this exercise she learned that Luce had incorporated thoughts from Dickinson’s letters into the play’s prose.

When Duncan appears as the rhyming recluse, she wears a simple white dress—Dickinson infamously wore white much of the time—and an apron. The costume is a stark contrast from the heavily accessorized outfit Duncan arrives at the Pewter Plough Playhouse wearing, including a black cap, black stockings, black flats, and silver jewelry. But both are strangely befitting the young actress—the initial garb proclaiming an artistic nature or bent that gives life to the spotless white vestment.
The pair sitting in the chairs opposite the stage, which Duncan physically gravitates toward, seem unlikely companions for the ing»nue. Each is more than 90 years old, and while Persoff predicts that Duncan will blaze a trail across the theaters of Broadway, he isn’t necessarily convinced that he will be there to see it. And Buckley is looking for an heir or heiress to whom he can pass on the keys to his little theater kingdom. While Duncan eagerly examines the show’s props and costume, Buckley and Persoff remain ensconced in their seats, with a blanket wrapped across Persoff’s lap to stave off the chill air.

“Each life converges to some centre,” Dickinson, the playhouse’s eloquent heroine stated, and Duncan, Persoff, and Buckley all just happen to lead lives that have converged upon the same passion and obsession. They’re all theater folk.

INFOBOX:  Hell of a belle

The Pewter Plough Playhouse presents The Belle of Amherst, through July 27. Friday and Saturday shows begin at 7:30 p.m. and Sunday matinees show at 3 p.m. Tickets cost $19 for adults, $16 for seniors, and $12 for students. Friday evening shows cost $14. For more information, or to purchase tickets, call 927-3877 or visit www.pewterploughplayhouse.org.

Arts Editor Ashley Schwellenbach has a soul that refuses to converge. Send recipes to aschwellenbach@newtimesslo.com.