You know what’s adorable? Videos of kittens on Facebook! You know what’s even more adorable? Actual kittens right in front of you! Since I desperately want to play with some kittens, but I need an excuse to go to The Feline Network’s Adopt-A-Pet event outside the Madonna Road PETCO this Saturday, July 12, without actually coming home with a kitten, I’m writing this important public service announcement to encourage you to adopt a cat or kitten. That way, this weekend, I can go play with kittens and write about them next week! Woo hoo!

Since my Crazy Cat Lady friend Cheri DePaulo just adopted a new 8-month-old cat, I figured she’d be the perfect one to interview about the joys of cat and kitten adoption.

Her newest addition to her five-cat pride is Holly, who came to her named Bo Peep, but when she saw her partially missing ear, she thought about Mike Tyson biting a chunk out of Evander Holyfield’s ear and renamed her Holly.

“She wasn’t hit by a car, but she looks like she probably bounced off of one,” says Keith, who is in so much trouble right now! 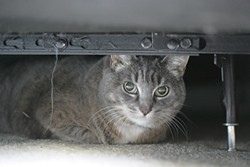 Cheri was just trying to buy some cat food at PetSmart on Froom Ranch Way in SLO Town when she saw a woman out front with a single cat in a carrier.

“I asked if she had just adopted it, and she said, no, that she was trying to find it a home,” Cheri recalls. “I didn’t mean to adopt another cat.”

Yeah, cat happens sometimes. When Cheri found out Holly was rescued by Paws Cause, a North County organization that traps feral cats and then spays or neuters them before returning them to the wild, she was told Holly wasn’t a good candidate for return to the wild, so they deemed her adoptable, and Cheri was sold.

“I put my finger in the cage and she was like ‘purrr,’” Cheri says, pantomiming rubbing her head against her finger. (See? Crazy Cat Lady!)

Of course, it wasn’t exactly smooth sailing incorporating another cat into her now five-cat household. At first, Holly spent a lot of time under the bed.

“She’s sort of living inside the box springs,” Cheri confides. “It’s like her cat condo.”

When I come over for a visit, Cheri coaxes Holly out, but she’s not much for posing for photos and scoots back into the bedroom and into her “condo” as soon as Cheri puts her down.

“They’ve all kind’ve been rescues,” Cheri says of her five cats, all of which are in hiding. Apparently, when there aren’t visitors, Holly is a lot more social.

Keith has a theory that he and Cheri’s cat army are basically like the TV show The Facts of Life, which ran from 1979 to 1988.

“Bootsie is like Mrs. Garrett,” he says. “She runs things around here. Maya is like Tootie. Eva is the drama queen Blair. Simba, our only male cat, comes and goes like he’s a guest star. Holly is like Molly Ringwald’s character because she’s the youngest.”

“She’s got ‘tortitude,’” Cheri claims, “which comes from her tortoise shell color. She basically comes across like a badass.”

“Are you a Crazy Cat Lady?” I ask pointblank. “I mean, is it like a disease?”

“Yes, it is like a disease,” Keith chimes in. “Hello, my name is Cheri and I’m a catoholic.”

“I know my limit!” Cheri retorts.

“Yeah, the city set your limit … at five!” Keith shoots back, digging his grave a little deeper.

They lost their former fifth cat a few months ago, a little male named Romeo, who acquired a lung infection. Twelve hundred dollars later, Romeo was gone, which reminds me, even though it’s not very expensive to adopt a cat, caring for one can run up some bills. It’s a commitment! I have two, 12-year-old sisters I’ve had since their feral mother died when they were just four weeks old. I call one of them the Six Million Dollar Cat, even though she only costs me $900 to fix her torn belly. Was it worth it, you may wonder? Hell yeah! Cats are awesome!

(Don’t tell my cats, but I’m still going to totally play with some kittens this Saturday. I hope to see you there!)