Adopt a cat or kitten July 19 or 26 outside PETCO in SLO Town! 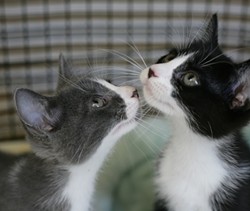 As my wife and I pull into the PETCO parking lot, I can see crates of kittens set up under a white pop-up. It’s just 11 a.m., opening time, but there are already people soaking up the adorableness that are kittens.

Christine Collie, one of the Feline Network’s volunteers and board members, immediately greets me.

“Christine,” I say, “you’ve got to promise me you won’t let me go home with a kitten. I’m weak! Don’t let it happen!”

She explains that the Feline Network is entering its 13th year of operations, which includes rescuing lost cats and kittens, foster housing, trap-and-release spay and neutering for feral cats, and low-cost spay and neuter programs for people with pets in need.

“We don’t have a shelter,” Christine explains, “so we’re out here almost every weekend to adopt out cats and kittens from our 20 or so foster homes. The kittens are easy to adopt out, though sometimes the black ones are the last to go. We always place them eventually, but sometimes not until they’re four or five months old.”

They sometimes adopt out as many as four or five cats and kittens a week, but I later find out only two will be taken home today. Still, Christine thinks their foster home system is better than a shelter since the cats and kittens become more socialized in a private home. 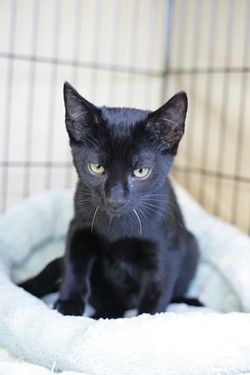 “Plus they’re not exposed to diseases as they sometimes are in a shelter,” she adds. “Our main purpose is to spay and neuter, and we have free certificates that people can get for $60 towards a spay and $40 towards a neuter.”

Before the Feline Network, many feral cat populations were running wild.

“When we first started, we’d come across huge colonies,” Christine recalls. “We don’t see that anymore.”

Their system for keeping feral cat populations down has been a huge success, and even if you don’t want to (or can’t) adopt a cat or kitten, the Feline Network and other cat rescue operations can always use our financial support to continue their good work.

As promised, I’m playing with two little brother cats, a white-and-gray one and a black-and-gray one, and fighting the urge to slip them in my pocket and run when I see an adorable little toddler named Scarlett Robesky reaching up to stick her fingers through a crate of black kittens.

Clearly delighted, the little one-and-a-half-year-old eventually gets her mom Sheri to hold one so she can pet it.

“She’s just crazy about kitties,” Scarlett’s dad, Dylan, says. “I hope she doesn’t grow up to be some crazy cat lady!”

Though Sheri and Dylan are interested in getting Scarlett a kitten, they’re worried she may be too young to have such a fragile creature in their home, and because the Robeskys live in a country setting, the Feline Network is worried about the prospect of the adoptees being indoor/outdoor cats.

According to Christine, it’s not a hard and fast rule that they only adopt out to homes where the cats will be indoors, but they worry about rural settings or homes on busy streets.

Even though they’re not going home with a kitty, Dylan expressed praise for the volunteers’ hard work and noted that the visit to the kitties “made Scarlett’s day and maybe week.”

Kittens and babies? How much cute can one guy take? A little more, I guess, because as my wife and I start to leave, we see Laton Animal Rescue & Care setting up their pens of puppies! Must resist! Must resist!

Adopt a cat or kitten!

The Feline Network (info@felinenetwork.org or 549-9228) will have their Adopt-A-Pet kiosk set up outside PETCO (271 Madonna Rd., SLO) on Saturday, July 19 and 26, from 11 a.m. to 4 p.m. You can also find a cat or kitten through the North County Paws Cause (northcountypawscause@gmail.com or 226-8311), Woods Humane Society (info@woodshumanesociety.org or 543-9316), the North County Humane Society (slonchs.info@gmail.com or 466-5403), Befriended Felines (BefriendedFelines@charter.net), and SLO County Animal Services (781-4400), among others.