An art basher attempts to reclaim fun for grown ups

This is how people break bones,” said Linnea Fritch.

Hers was the lone voice of reason as Katrina Dorsey (my lovely lady wife), Marc Mayes, and I prepared to ride giant ice cubes down a steep, grassy hill for no reason whatsoever. It was definitely a dumb idea, but it was a whim that couldn’t be ignored: We wanted to play.

I’m not sure how or why it happened, but practically everyone I know suddenly got sick of adulthood last weekend. Entirely separate sets of friends were bemoaning bills and responsibility, wishing nostalgically for that feeling of carefree joy we had as kids. Remember that feeling? Remember fun?

With that kind of longing in the air, there was no way I could sip wine at an art opening this weekend. Sorry, but I just wanted to run around screaming and laughing like a dumb kid. And guess what? It was just as fun at 26 (and probably 48 even) as it was before puberty. 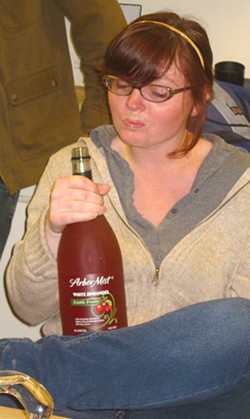 My last pair of good jeans is now ruined with grass stains, but I don’t regret a single second of springtime ice sledding. We had two cubes, three riders, and a fairly short hill, so wildly careening straight down actually got pretty boring pretty quickly. So we raced. We rode backwards and on our bellies. I even tried standing with one foot on each cube, but damn near did the splits before falling face first in the grass. There were definitely more crashes than successful rides, but it’s not real playing if you don’t walk away with a few bruises and scrapes.

Two days later, it was Saturday, which of course meant video games and drunken hide and go seek. New Times editors and pillars of professionalism Ashley Schwellenbach and Colin Rigley invited a few staffers, interns, and contributors to play Mario Kart 64 through a projector that cast the game on a giant wall of awesomeness. It wasn’t long before everyone was yelling, cursing, and throwing turtle shells at one another. 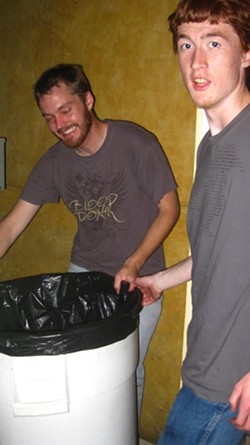 But if we were going to play like kids, it was time to get serious (kind of) with the Super Bowl of childhood: hide and seek.

“Who’s gonna be it?” someone probably said (kids don’t take notes during playtime).

Like lightning, everyone’s finger shot to his or her respective nose except for Chris White-Sanborn, who really needs to practice his nose touching. We got you like three times, Chris! Anyway, he counted to 60 while the rest of us hid in dark closets, cabinets, and laundry piles.

He yelled those immortal words, “Ready or not, here I come!” and my heart started pounding like that dead guy from the Edgar Allen Poe story. It’s weird how intense a silly game can feel. He found me right away (under a desk is a crummy hiding spot), but Ashley had hiding skills like her parents were a ninja and a chameleon who fell in love at a dojo across the street from an exotic reptile store. Whenever anyone finally found her, she’d erupt in schoolgirl-style giggling fits, which was fine because that was the whole point.

Now all Calendar Editor Nick Powell needs is a nap, a juice box, and some string cheese. Send those to npowell@newtimesslo.com.