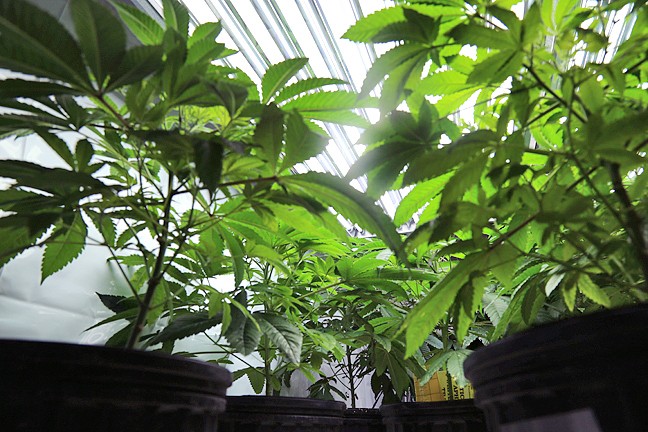 Cannabis industry members say the new county ordinance, approved by the Board of Supervisors on Nov. 27 by 3-2 vote, makes it impossible for businesses to obtain state licenses at the start of 2018 and establishes onerous restrictions that will drive operators out of business.

"[The county supervisors] are not able or willing to govern rationally about this," Donahoe said. "So we need to take this issue out of the hands of this Board of Supervisors."

Per the county ordinance, eligible cannabis businesses, from cultivators to delivery services, will have to apply for discretionary permits from the county—a process that will likely take several months, according to county officials.

But in the interim, the county has no plans to provide businesses the written authorization required to receive temporary state licenses. The state plans to first issue temporary licenses valid for 90-day periods, and eventually issue annual licenses as the marijuana industry comes out of the dark.

Those state licenses are only granted with the authorization of the local jurisdiction.

"Temporary licenses require that applicants submit a local license, permit, or other written authorization," said Rebecca Forée, a spokeswoman for the state Department of Food and Agriculture, in an email to New Times.

Despite the inability to get a temporary state license, County Counsel Tim McNulty told New Times that medical cannabis growers may still be protected from prosecution under the Compassionate Use Act of 1996.

"They should be able to continue to operate as a collective and cooperative," McNulty said, referencing a "provision that specifically allows" for that defense "for one more year."

County board discussions about this issue have focused on redirecting local enforcement priorities away from cannabis operators in good standing, or, in other words, "looking the other way" if a cannabis operator appears to be en route to obtaining a county permit.

But to Donahoe, that's insufficient.

"Right now, the county won't let you get a state license, and the state says you have to get a license," Donahoe said. "It's tremendously risky as a business to be operating with no county or state authorization."

Donahoe said the effect of the ordinance is that businesses will have to either cease operations, operate in isolation from the state market, or continue business in what he called the "gray market."

At the board's Dec. 5 meeting, Donahue and Jason Kallen, president of SLO Chapter of the National Organization for the Reform of Marijuana Laws, spoke to the board and asked them to reopen discussions about the ordinance.

Assistant County Administrative Officer Guy Savage said county staff is preparing a memo that will outline the issues surrounding the licensing, which was requested by 2nd District Supervisor Bruce Gibson at the Dec. 5 meeting in response to Donahoe and Kallen. Δ