After a mix-up, officials order the removal of Ontario Ridge fences 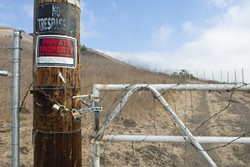 View a copy of the letter sent to the county (.pdf).

Late on Feb. 7, San Luis Obispo County officials and their counterparts at the Coastal Commission came to an agreement about the legality of fences and signs blocking access to a popular hiking trail on Ontario Ridge.

Although county leaders had previously maintained that Rob McCarthy—the landowner who recently erected the fences—didn’t need permits to do so, they’ve since reversed their position.

As the fences are now considered illegal and unpermitted, the county has ordered the removal of all fences and signs blocking the trail.

This abrupt change in the Ontario Ridge situation is almost entirely due to the work of Steve and Cary Geihs, local brothers who work in real estate and real estate law.

Cary, who’s an avid hiker and was disturbed by the closure of the trail, conducted a search of county records and quickly found an existing public access easement from December 2009.

That easement is granted to the public for hiking and a wide variety of outdoor activities. It applies to a 20-foot-wide strip of land on McCarthy’s property that directly follows the current trail.

Soon after Cary discovered the easement, his brother, Steve, a local attorney, wrote a Feb. 5 letter explaining the easement to the Coastal Commission and the county.

Two days later, the county and the commission came to their agreement. Subsequently, a planned dispute resolution hearing on the issue slated for the Coastal Commission’s Feb. 13 meeting was canceled.

The Geihs brothers said they were “amazed” by the county’s error.

County and commission officials confirmed that they were unaware of the easement until the Geihs brothers brought it to their attention.

“I’m not quite sure how this easement slipped through the cracks, but it definitely changed the factual landscape,” said Dan Carl, the deputy director of the Coastal Commission’s Central Coast District Office. “The commission has always held that Mr. McCarthy needed coastal permits, but discovering the existing easement was important for the county.”

Carl said that this newly discovered access easement supersedes the commission’s ongoing prescriptive rights study concerning Ontario Ridge. However, he said the study would continue, because it could potentially open up much more land to public access than just the 20-foot-wide strip currently defined in the 2009 easement.

Kami Griffin, assistant director of the SLO County Planning and Building Department, was even more blunt in her assessment.

“This is frankly embarrassing for the county, and I’m glad that this existing easement was found before the planned Coastal Commission hearing,” she said. “When we found out about the easement, it changed our position.”

Shaun Cooper, a senior planner for the county parks department, said the easement was negotiated between his department—who owns the adjoining land parcel—and the previous owner of McCarthy’s land.

“There’s been a lot of staff turnover here since that easement was established, and so there was a lack of institutional memory,” Cooper explained.

He said that the county has now ceded primary enforcement authority for the fence removal mandate to the Coastal Commission, which wields heavier sanctioning authority and has more experience handling similar issues.

When asked about the commission’s fence removal enforcement responsibilities, Carl said his goal is to “get the site restored to its natural state as soon as possible.”

“Just like anybody else, Mr. McCarthy has the right to apply for a coastal permit, but we don’t currently support him building fences in that area,” Carl said.

McCarthy told New Times he was “completely baffled” by this “very, very strange situation,” and that he had no prior knowledge of the public access easement until he received notice from the county the other day.

“I have seen no legal basis for this order, and I’m asking the authorities to clarify their argument before I remove anything,” McCarthy said. “This has been a lot of ranting and raving about me trying to make everyone safer.”

McCarthy also alleged that the access easement—which was negotiated between the county and the former owner, a California limited partnership called San Miguelito Partners—buried the fact that the easement was for public access in “the fine print.”

He alleged that the county “snuck that through” in dealings with the previous owner.

Cooper and Griffin both emphatically denied that any element of the access easement had been “snuck through” on McCarthy or the previous owner.

McCarthy, who is also attempting to construct a house on his Ontario Ridge land parcel, said his ultimate goal is to come to a compromise with the county and relocate the easement and trail, which he still insists is dangerous in its current state.

Attorney Steve Geihs and Deputy County Counsel Whitney McDonald told New Times that such a relocation of the easement and trail is indeed McCarthy’s right under the easement agreement. However, they said any action would have to be negotiated between the two parties, couldn’t be done unilaterally, and any new trail/easement location would still have to remain on McCarthy's property.

Steve Geihs added that the current trail location is the least disruptive and “best possible location” for McCarthy given the planned location of his house, so he’s not sure where else on his property McCarthy would want to move the trail.

“The public’s access to the trail shouldn’t be used as a bargaining chip,” Hill said. “I hope McCarthy doesn’t drag this out and further antagonize the community.

“It’s pretty clear that there’s a process here that, ultimately, will not favor McCarthy,” he added.

On Feb. 4, McCarthy’s representatives installed new signs on several of his Ontario Ridge fences that read, in part, “Area Closed By SLO County Code, Unsafe For Hiking Trails.” Since McCarthy closed the area, and McCarthy has been the only party to deem the trail “unsafe,” Hill said he reported the “misleading” signs to county code enforcement.

As of Feb. 12, local attorney, activist, and hiker Tarren Collins said some of the new signs have been removed, but the barbed wire fences remain. Aggravated hikers have used bolt cutters to cut through certain sections of fencing, she noted.

Collins added that the Coastal Commission would still be receiving general public comment on the Ontario Ride matter at its Feb. 13 meeting at The Cliffs Resort in Pismo Beach at 8:30 a.m.