In these tumultuous times, what if you could traverse the entire United States? Not in a RV. Not in a converted van. On foot. One after the other.

Ben Walther doesn't have to imagine it. He actually did it. Between May and November 2017, the Arroyo Grande native walked 3,600 miles from San Francisco to Lewes, Delaware, just a few years after he overcame lymphoma. Then a few months later, he biked all the way home. Among his goals was to bring awareness to the issue of universal health care. He documented his journey on a blog at facebook.com/myownmomentum. 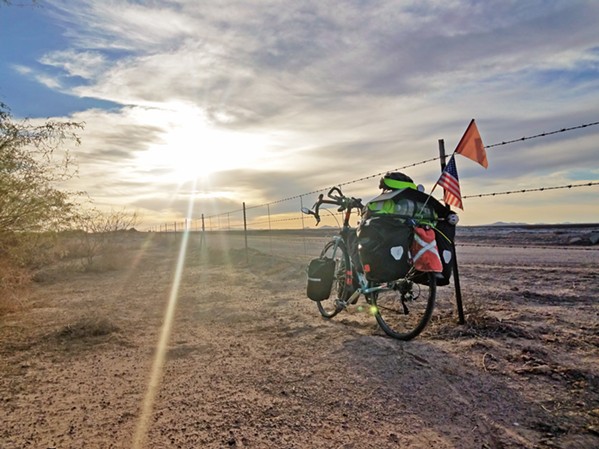 New Times sat down with Walther to ask him why and how he made the trek and what he learned along the way. What follows was edited for length and flow.

New Times: You found out you had cancer in 2013. What was that like and how did it lead you to decide to walk across the country?

Ben Walther: I was 27 and I was having some trouble breathing. I eventually went to hospital and they were like, "We're 90 percent sure you have lymphoma." It's such a kick in the gut realizing your life has turned over in that split second. It blows your world into pieces and you kind of have to put it back together. I took some time off and did the treatment, about eight months of chemo and three months of radiation. What's funny was getting through the cancer and the treatment was actually pretty easy. What was way more challenging was after I got through with it. Cancer really condenses life to how am I going to get through this week, or this day? It really narrowed my horizons. I had about two years after where I was just working a crummy job and making a lot of self-destructive decisions. I was out hiking one day and was like, "I'm miserable. I'm really out of shape. I've been given this gift of having my life continue and I'm really squandering it." There was this ephemeral thought of, "I should walk across the country." That was on April 1, 2017, and on May 1 I left from Lands End in San Francisco.

NT: Did you ever think about turning around?

BW: Probably the wildest part was either the Great Basin Desert of Nevada and Utah or the Great Plains. The Sierras and the Rockies were so majestic that it was easy to stay engaged. Out in the desert or the plains ... just put a picture of cornfields in front of you and stare at that for a month straight. That's way tougher. But once I started, I never thought I'd turn around. And that's out of character for me. It was pretty life-changing to have that experience. 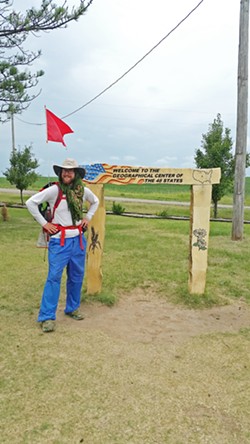 NT: Pretty much everything a mountain backpacker would have, I had. Through the West, it was a lot of Bureau of Land Management land, so I'd just get 100 feet off the road, pitch my tent, and call it good. Once you get over the Rockies, so much of it is private property. There were definitely a lot of roadside ditches and cornfields.

NT: What'd you do about supplies and water?

BW: When I was going across the desert I was pushing a little three-wheel baby carriage with gallon water jugs. From the Nevada border to Delta, Utah, that was 119 miles of no services, no houses, no nothing. That got me through that stretch of about five days. I walked about 20 miles a day on average.

NT: Was that scary?

BW: Not at all. The best training is doing it. By the time I got to the desert and these more challenging areas, I was ready for it. The hardest part is convincing yourself you can do it. If you have that confidence, chances are you can do it.

NT: You walked in support of single-payer health care. Why?

BW: Medicaid saved my life. Right before my diagnosis, the first mandatory Obamacare sign-up came around. They were like, 'Do you know you qualify for Medicaid?' I was putting off going to the hospital because I knew how much it was going to cost to get a good diagnostic. So [with Medicaid] I knew that I could go and not go bankrupt. Going for two days was over $42,000, and it really struck me that I was so fortunate to have just threaded that needle. In my opinion, there's such a better way of handling it, looking at places like Canada or France or all of the Scandinavian countries. A huge part of health care costs in America is administrative. If you can cut that out and have one system instead of hundreds, you're actually saving money while providing better and more coverage. So I did a fundraiser for Physicians for National Health Program, which is an advocacy group for single-payer health care, and raised about $2,000 for them. I talked to a lot of people about how health care expenses have impacted them. It's something that really affects a ton of people.

NT: So you struck up conversations with people as you walked?

BW: One of the coolest things was being exposed to the world. It was one of the big reasons why I did it. In the 2016 election we heard so much about bubbles. But it was always the "others" are in their bubbles. It was really realizing that if the Central Coast isn't a bubble, then I don't know what the hell is. I'm pretty well educated, pretty well read, but I don't really know anything about the world. I wanted to go out there and see it with my own eyes. The regional differences in America are so real and very valid.

NT: How did the experience shift your perspective on the regional and political divides in America?

BW: It was incredibly humanizing. There was this one guy who was like Hagrid from Harry Potter—big beard, big hair, a road worker in the middle of Kansas. He put me up for the night. He was one of the most amazing, kind, generous people I've honestly ever met. Then I was leaving and I noticed he was flying the stars and bars [Confederate flag] out in front of his house. It's like, on the one hand as a human being, you're amazing. In terms of your ideology, you're wrong. I met this other dude in Kansas. I ran out of water so he gave me a ride into town. He was a very rough individual and talked about how he was super pro-Trump, and what he really appreciated was that he was a no-bullshit kind of guy. He talked about when he was growing up, if you have a problem with somebody you take it out back, you throw down, and whoever wins is in the right, and that guy helps the other guy up and you move on with your lives. I could kind of understand that. I don't agree with that, that's not how I go through my life, but it's about understanding where people are coming from. Going through the Rust Belt, I saw these towns that are like falling apart, especially with the opioid epidemic, where there are so many people out of work. I just saw the immense suffering that's happening. It's not like we don't have it here, but we don't have it to any degree they have it there. For a lot of people it is survival. When that's what's on the line, it's very black and white. The person who just keeps saying, "I'm going to make sure you'll survive," that's who you're going to go to to the exclusion of all else. It definitely didn't change my mind in any way, but I definitely understood it a lot more.

NT: What was that moment like when you made it to Delaware?

BW: I was expecting to be super hyped and giddy, but I don't think I'd been calmer in my entire life. What kept going through my head was just the idea that this isn't the end. When I put my feet in the ocean—that's not the end of the journey. The end of the journey is when they put me in the ground. That was one of the most meaningful things to me.

NT: How did you decide to bike home?

BW: My original plan was to see if I could find a job over there and start a life. But I didn't really find anything and so I rode my bike from St. Augustine, Florida, to San Diego and then up to SLO, pretty much along the Gulf Coast. In a lot of ways that was much more fun. Doing the walk was kind of like a job, where this was my treat to myself.

NT: Now that you're home, where does this experience take you?

BW: What I'm aiming to do is get into bike tours for a living. I also want to start volunteering my time to go on bike rides with people who are either in treatment for cancer or are done (see facebook.com/ourmomentum). I'm trying to find a way to integrate it into my life.

NT: How do you respond to people who hear about what you did and say, "I'd love to do that but I can't"?

BW: I met so many people who that was their response. When I started, I was way overweight. I'd never been backpacking. Not only was I unskilled, but I wasn't totally physically prepared for it. The only thing is time. If you have time, you can do it. As long as you're willing to put in the time, it sounds so trite, but you can do anything. Δ

Assistant Editor Peter Johnson is dusting off his backpacking gear at pjohnson@newtimesslo.com.