After decades of effort, SLO County is poised to adopt oak woodland protections

It may have been the most vocal instance, but it certainly wasn’t the first time the community has asked the county to pass tree protections. So when the Board of Supervisors submitted to public pressure and asked staff for an ordinance, longtime county planner Jay Johnson didn’t need to start from scratch. 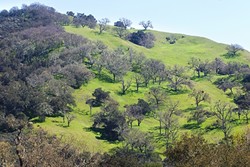 In fact, Johnson didn’t need to do much work at all. He stepped into his office of 32 years and pulled out an old folder, which contained an already-finished native tree protection ordinance. He helped write it during the 1990s, though it never became law. Suddenly, in 2016, that old ordinance was very relevant again.

“I literally pulled it out of a box,” Johnson told New Times. “There wasn’t an electronic copy. It was only on paper, and I kept it.”

The dusty ordinance serves as a fitting metaphor for the long and often frustrating history of tree protectionists in SLO County. Crafted over several years in the mid-1990s in response to concerns about overdevelopment, the rules set tight restrictions on removing native trees like oaks, sycamores, gray pines, and madrones. Though the preservation of native woodlands for their ecological, agricultural, and social benefits is stated in the county’s general plan, by 1997, Johnson’s ordinance couldn’t overcome politics.

“By the time we got it to where we felt it was backed by the landowners, politics changed,” Johnson said. “The new [Board of Supervisors] said, ‘We don’t want any of this.’ And they didn’t adopt it.”

When news spread about Justin Vineyards’ clear-cutting last summer, the political pendulum swung back again, and hard, toward protections. The Board of Supervisors adopted the ordinance of the ’90s last July as a nine-month “urgency ordinance.”

But once again, the comprehensive tree protections won’t stand the test of time. The supervisors asked staff in August to change the scope of the permanent regulations to protect only oak woodlands, which were The Wonderful Company’s vicitims.

On April 11, the Board of Supervisors will take a vote on an Oak Woodland Ordinance.

Here’s what the ordinance would do:

• Apply only to oak woodlands, defined as at least 1 acre of trees that are “distinguishable as a unit,” where blue oak, coast live oak, interior live oak, valley oak, or California black oak is the dominant tree.

• Require property owners to obtain a county permit to clear-cut more than 1 acre of oak woodland.

• Allow, without oversight, the removal of individual oaks, except oaks defined as heritage oaks.

• Accept an Oak Woodland Management Plan from landowners, where the cumulative amount of clear-cutting doesn’t exceed 5 percent of a site’s total woodland.

• Allow clear-cutting for establishing a fence line or a fire break.

• Institute fines of up to $25,000 for violators, and stop planting or site development for at least seven years.

• Not apply to the Coastal Zone.

While the ordinance doesn’t cover every native tree species, Holly Sletteland, an Adelaida resident and activist who worked closely on the county effort in the ’90s, told New Times she’ll take it at this point.

“This ordinance isn’t as strong as I’d like it to be, but it’s the best we can hope for right now,” Sletteland said.

County planners Johnson and Megan Martin, who have met with about 20 community groups across SLO since the fall, say the ordinance strikes the right balance for people from diverse backgrounds.

“We didn’t want to overregulate; we also didn’t want to not protect the woodlands,” Martin said. “It seems to me that a lot of people have come to understand that getting something on the books is worthwhile. … It puts that action [of clear-cutting] into the public forum.”

Dan Gluesenkamp, executive director for the California Native Plant Society, believes the policy is worthwhile. With oak woodlands on the decline across the state from development and disease, Gluesenkamp said SLO County is wise to take these steps.

“With all the threats to oaks, there’s really no better time to start protecting them,” he said. “Without oaks, humans probably couldn’t have persisted here.”

Gluesenkamp noted that SLO County’s well-preserved landscape has left it vulnerable to getting taken advantage of by careless investors.

“For the most part, development in SLO has been done smart,” Gluesenkamp said. “That has left some opportunities on the table for people who aren’t willing to play by the rules. The No. 1 threat to oaks is not development—it’s development that takes advantage of the good wills of our communities, and does something that no one else would do.”

The Wonderful Company’s systematic oak tree clearing since it purchased Justin Vineyards in 2010 is a prime example of that, he said. Sletteland of Adelaida believes the egregious events of last summer lit a fire under the community that has been pivotal in propelling the policy forward.

“The ’90s was sort of a bureaucratic process; the community wasn’t as involved,” Sletteland said. “With this, the momentum started in the community.”

Sletteland recently launched an online petition in support of the ordinance that’s garnered more than 700 signatures. She doesn’t want the Board of Supervisors’ vote on April 11 to go unnoticed or unsupported.

“There’s no question that Justin Vineyards wasn’t an isolated incident. We’ve lost a lot of oaks,” she said. “I’m very hopeful we’ll get something in place, this time.”