After the pandemic closed his SLOMA exhibit to the public, Mark Bryan painted on

Get your hands on Mark Bryan's artwork in his 140-page book Pictures in My Head: The Art of Mark Bryan, available through his website store—artofmarkbryan.com—where prints of his many works are also available.

On March 4, 2020, local artist Mark Bryan was riding high. It was opening night of his new exhibition of paintings, Fake News, which was installed in the main gallery of the San Luis Obispo Museum of Art. The show looked amazing!

"It was wall-to-wall people, just packed in there, and there was all this finger food out," Bryan recalled with a laugh.

A few people were becoming aware of the severity of the COVID-19 pandemic and would extend an elbow in greeting, others went right in for a handshake—oblivious.

"A week later, the show was shut down and closed to the public," Bryan noted. "It sucked because I worked for a year and a half on it." 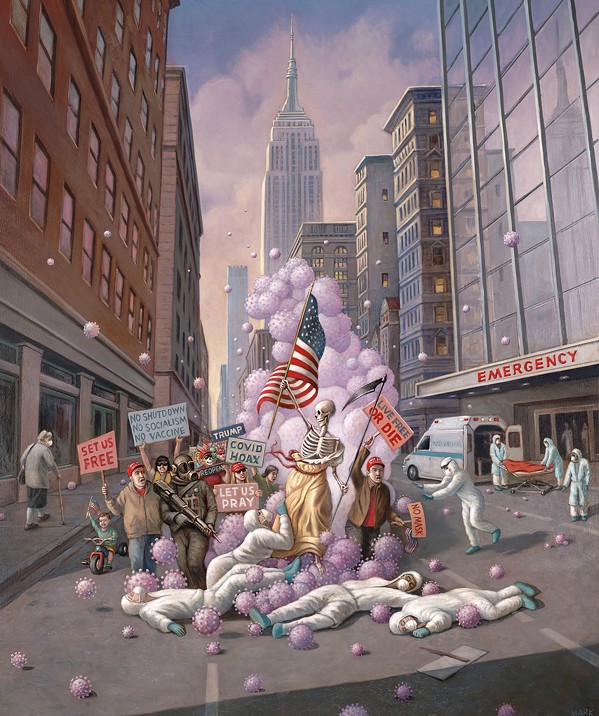 Few people got to see the exhibit firsthand, though the museum staff did their best to make lemonade out of lemons by creating a strong online presence. Bryan went back to his bungalow studio in rural Arroyo Grande and did what he does best: He kept on painting.

He began working on Death Leading the People, a large-scale painting based on Eugène Delacroix's famed Liberty Leading the People, but instead of a brave brunette with breasts spilling out of her dress holding high the French flag and leading her people to freedom, it's a skeleton leading anti-maskers and anti-vaxxers through New York City streets as COVID-19 lays waste to the populace.

"She's having a good day because she's leading all these dumbasses to their death," explained Bryan, whose children are health care workers. "The signs came from real signs I found on Google. I was inspired by a local demonstration I saw on Oak Park Road. This is set in New York, and health care workers are begging them to stop. This wasn't in the SLOMA show, but I painted it while the show was up but closed to the public. I eventually hung it, but very few people saw it." 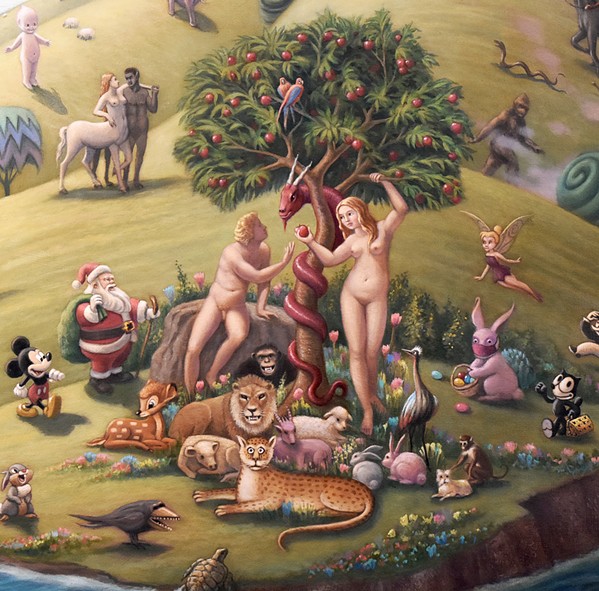 It's an amazing piece—one of four big paintings Bryan has worked on since his show was shut down. Fantasy Island, which he says "took about six months to finish," hangs in his living room.

It's incredibly detailed and takes many minutes to fully take in.

"It's all about the things humans invent in their imaginations but have no basis in fact," he explained. "There's an old white man in the sky, a flat Earth, Adam and Eve, the very concept of good and evil, which is also a human invention. It's inspired by the famous Hieronymus Bosch painting The Garden of Earthly Delights. Just like Bosch's painting, it moves from light to dark as you move right. There's the QAnon Shaman moving toward Gumby, a Trump water snake."

"I didn't trash God and Jesus, but the idea that Jesus walked on water? I don't think that's what happened," Bryan quipped.

Out in his studio, he has a recently finished painting of Russian President Vladimir Putin. Current events are always on the artist's mind, but the big piece he's currently working on is Pandemonium, inspired by John Martin's 1841 painting of the same name that depicts Satan overlooking his hellish domain.

"Martin's Pandemonium hangs in The Louvre and was inspired by Milton's poem, 'Paradise Lost,'" Bryan said. "In fact, Milton coined the term 'pandemonium,' inventing it as the name of the capital of hell. It comes from the Greek words 'pan' and 'daemonium'—all the demons."

Over the course of his presidency, Trump was a frequent target of Bryan's razor-sharp political commentary, but unlike Fantasy Island, you won't find any Trump paintings hanging in his living room.

"I don't put any of my Trump stuff in my house. I don't want to look at Trump. It isn't healthy. Those paintings are done for a specific purpose," Bryan said.

Another new large-scale painting is called Discovering Cabrillo, Bryan's take on the battle between indigenous people and Western civilization. A headless statue of the Spanish explorer is being examined by indigenous people who've arrived in Micronesia-style boats, clearly having traveled a great distance to this strange ruin.

"There's a Cabrillo highway, Cabrillo high school, but he was a mofo," Bryan stated. "He came over with Cortez and enslaved and murdered indigenous people. This takes place in San Diego in the future after an environmental or political collapse, and I envision hardly any people around. You can see [Trump's] border wall in the distance and beyond that Tijuana."

Bryan studied architecture at Cal Poly for two years before transferring to the Otis College of Art and Design, where he received his art training. Before he became a full-time artist about 20 years ago, he made his living by designing and building houses.

At Otis, his painting instructors were all abstract expressionists rooted in '50s thinking, who believed representational painting was passé. Bryan had to train himself to paint in this classical representational style. He starts with a monochromatic brown and white underpainting before layering oil on top.

"The funny thing is that the techniques I came to invent were actually how the old masters did it," Bryan noted. "If someone had told [me] that 20 years ago, I could have saved myself a lot of time screwing around."

His works are a marvel, and he's got a wonderful monograph that chronicles his career. The 140-page tome features more than 100 paintings and covers his circus- and theater-themed work, his land- and seascapes, interiors, political paintings, portraits, sci-fi and fantasy, and parodies of famous paintings. The book, designed by Cal Poly grad Chris Taylor, is available for purchase on Bryan's website, artofmarkbryan.com, as well as prints of his work. He also has thousands of Instagram and Facebook followers. Clearly, people love what he's doing.

"I'm a storyteller," he said. "It took me a while to figure that out. They're basically illustrative, sort of editorial cartoons, but painted in a classical way with oils." Δ