After the revolution, before the millennium

In Amy Herzog’s intelligent play After the Revolution, Emma Joseph has built a career on the legacy of her grandfather, a Marxist who was blacklisted in the ’50s. Then Emma discovers Grandpa Joe was actually a Soviet spy, and her world unravels.

After the Revolution, which will be presented as a staged reading at the San Luis Obispo Little Theatre, can be interpreted a number of different ways. It’s about family; it’s about the lies we tell our children; it’s about the past. But David Hance, who directs the play in an upcoming Ubu’s Other Shoe production, saw the premise of After the Revolution as a metaphor for the death of storytelling. 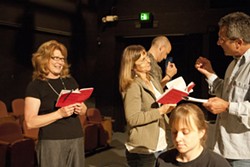 “One of the things that grabbed me was not just the characters and the story and the details of it,” Hance explained, sitting at the bar of Alegria Wine and Ware—a family business that had moments earlier doubled as a rehearsal space—“but the idea that, maybe we’re in the time where the old stories don’t work anymore.”

Hance came across the play after reading Douglas Rushkoff’s book Present Shock—in which Rushkoff argues that the dawn of the new millennium marked the end of narrative. Herzog wrote the play only a few years ago, but set it in 1999, Hance points out. And as the new millennium gets closer, Emma, played by Maggie Coons, discovers that the stories she’s always been told are invalid or incomplete. Whether or not Herzog had this metaphor in mind, it’s a fascinating reading of a play full of intriguing themes.

Herzog looks at 1999 with subtle wryness. “We’re about to see the new millennium. It’s hard to imagine things getting much worse,” announces Emma’s father Ben (played by Daniel Freeman) early in the play, concluding a kind of impromptu speech about what’s wrong with the world. But we know things will get worse—for Emma and for the world.

After graduating at the top of her class, Emma has gone on to found the Joe Joseph Fund, dedicating it to social justice concerns such as that of Mumia Abu-Jamal, a former Black Panther convicted, perhaps wrongfully, of killing of Philadelphia police officer. But when evidence surfaces that Joe Joseph passed information to the Russians, Emma’s work is threatened. Worse still, it turns out that just about everyone in the Joseph family knew this already but didn’t tell her. What follows is just as much a family drama as a political one.

Herzog—no relation to Werner—is a young playwright who’s based much of her material on her own Marxist family history. Her 2011 play 4,000 Miles, a follow-up to After the Revolution, was a finalist for the Pulitzer Prize.

The upcoming Ubu’s Other Shoe production is one is a series of staged readings handpicked by Ubu’s artistic director, Michael Siebrass, who often directs the shows himself.

Coons appeared a natural fit for Emma at a recent rehearsal of the production, though she’s older than the idealistic young character in Herzog’s script. When casting After the Revolution, Hance said, he reasoned that age-appropriateness was less important than personality and acting ability—especially for a staged reading. Emma’s grandmother Vera, oddly enough, is played by a young woman. Cordelia Roberts embodies the unfussy character in a way that reads as elderly, but not necessarily grandmotherly.

“We read Cordelia sort of by accident for that role,” Hance explained. “She was just reading in because we didn’t have another woman there at the time. And then we thought, we should bring her back. … The older women we had audition for the role were all too stereotypically older women-y. They were dotty, and they weren’t intent enough, as Vera really was. They made Vera sound batty. And that didn’t work.”

Two members of the cast are new to theater, though you’d never guess. Clint Kempster’s portrayal of Emma’s uncle Leo is slightly reminiscent of Joe Pantoliano. Scott Abrams delivered one of my favorite performances as wealthy donor Morty, nailing the Jewish New Yorker thing without giving over to parody.

I always remark on how “natural” an actor Freeman is, and it still seems the most fitting adjective. He makes a stubborn yet likeable Marxist dad, and he and Coons are clearly comfortable with one another (the two played a married couple in a local production of Dinner with Friends). The relationships between Emma and her sister Jess (Marie Steck Johnson) or her boyfriend Miguel (Arash Shahabi) had yet to achieve this level of intimacy.

After the Revolution humorously uses the latter relationship to highlight the generational differences in open-mindedness in Emma’s family. Vera wants to know what Emma has against Jewish men, while Ben brags that his daughter only dates Latinos and eagerly greets her boyfriend in Spanish, even though Miguel insists he doesn’t really speak Spanish. Culturally sensitive to a fault, Emma claims that her father’s overly compensatory niceness to her boyfriend is itself racist, which Miguel finds absurd.

As the play progresses, it appears more and more plausible that Emma might be taking the news about her grandfather a bit harder than everyone else. Relationships and social justice projects stall as she becomes caught up in the perceived drama.

“What happens when somebody cuts your story off at the knees? How do you cope with that?” Hance asked. “Scene after scene, people are telling Emma she’s losing the forest for the trees. They tell her over and over again to get real and to stop neglecting the fact that she does good work, and getting hung up on this one thing. … And to me, that’s someone saying, the story doesn’t work for me. The good work is great, but someone took away this key feature.” ∆

Once upon a time, Arts Editor Anna Weltner … or something. Never mind. Contact her at aweltner@newtimesslo.com.