After the Wedding: Past and present collide

The past and present collide when Isabel (Michelle Williams), an orphanage owner in Kolkata, India, travels to New York for a meeting with a mysterious potential benefactor (Julianne Moore). Director Bart Freundlich (Wolves) helms this American remake of the 2006 Danish drama of the same name. (112 min.)

Karen In Kolkata, India, Isabel manages an orphanage, leading meditation or taking long rides through town to bring meals to the children. While Isabel cares for all the children, she has a deep bond with Jai (Vir Pachisia), who she's taken care of since he was found on the side of the road as a toddler. In her calm, humanitarian life, the one thing that troubles her is a lack of funding. In order to secure a donation from a donor in New York, Isabel must make the plane ride. Something doesn't add up, though, because the donation seems to come with hidden conditions. Upon meeting the donor, Theresa, it turns out she is married to Isabel's old boyfriend, Oscar (Billy Cudrup), who has kept a secret from her that will change the family dynamic forever. But Oscar isn't the only one keeping secrets. While I enjoyed the overall family drama, the acting, and the story, this film isn't unique. It's a remake of the 2006 film of the same name, written and directed by Susanne Bier (Bird Box). I'm not quite sure I understand why there was a remake at all, but I'm not mad about it.

Caleb I'm definitely not mad about it either, although I did go into After The Wedding with caution, having loved the original Oscar-nominated Danish film. The divisive reviews—with scores ranging from 44 percent (critics) to 78 percent (audience) on Rotten Tomatoes—made me even more trepidatious. I wasn't expecting this remake to surpass its source material, which it doesn't. But I also wasn't expecting to be so impressed with Williams' moving performance as Isabel, a gender-swapped version of Jacob (Mads Mikkelsen) from the original. If the film brings anything new to the table at all, it's just that—the role reversals. Still, if I had to choose between the two performances, Mikkelsen wins by just a hair. There's just so much raw intensity in Bier's film that gets lost in translation, unfortunately. But still, Williams isn't just phoning it in, and neither is Moore, who is effective as Theresa. Like her male counterpart in the original, Jorgen (Rolf Lassgard), the character is multilayered, bipolar, unhinged, and ultimately tragic. I thought Crudup's casting as Oscar—filling Helene's (Sidse Babett Knudsen) shoes—was a safe bet. I was also childishly amused that it's the second time this year we've seen him married to someone strung out on prescription meds half, if not all, of the time (Where'd You Go, Bernadette). 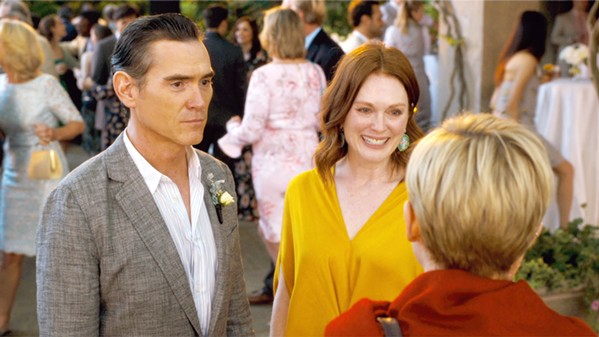 Karen We were definitely cracking up when Oscar appeared on screen; it seems that he's getting typecast these days, but hey, you gotta do what you gotta do. I haven't seen the original, although seeing this remake definitely leaves me wondering about the original, so I'll be searching the web for the rental. That being said, I did like the storyline of this Caucasian woman who seemingly doesn't have a bad bone in her body and devotes her life to these less fortunate children. I don't want to give away anything, but Isabel has definitely made some life-altering decisions that would lead to pulling apart a family. I did appreciate how different the characters were and the strong personalities all the actors brought to the table. Let me tell you, there is a lot of crying, yelling, and awkward moments that I felt put the audience right alongside Isabel as she tries to understand what she's really doing in New York. I appreciated the cast because I felt everyone committed to their character and that was apparent on screen. While I'm not entirely in love with the film, I would definitely recommend you take the time to get lost in the story in the comfort of your nearby movie theater.

Caleb For me it was like seeing a new production of a great play, albeit a far more conventional production than Bier's. The original takes its time a bit more, leaving more room for subtlety, and less so for objective resolutions. I need to watch it again, because I'm curious about one character in particular—the counterpart of Frank (Will Chase), the groom in the titular wedding, and future son-in-law to Oscar and Theresa. This guy seems slimy from the get-go and proves to be so pretty early on. He's obviously not a good dude and I'm fine with that, but I would have appreciated a less black-and-white characterization. Then again, I can't recall how much of a jerk his former incarnation is, so I might be eating these words later. Overall, this remake still gets enough things right for me to recommend it as worthwhile, whether you've seen the original or not. Maybe it was just Mychael Danna's (Life of Pi, Little Miss Sunshine, Hearts in Atlantis) beautifully bittersweet score manipulating my emotions. But I'm not complaining. Go ahead, Mychael, tell me how I should be feeling right now. Δ