The Morro Bay City Council decided to purchase Dog Beach and approved a sphere of influence amendment for five lots on March 23, with a goal of conservation. 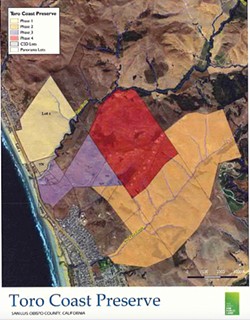 City Councilmember Robert Davis has been a part of those discussions since the opportunity presented itself to the city years ago.

During the March 23 City Council meeting, Davis, now in his fifth year on the council, said that he made a promise to himself that he would ensure Dog Beach and other proposed lots in this project would be under sustainable management.

He said he was proud to see the preservation project come to fruition.

The council approved 4-1, with council member Jeff Heller voting against the proposal, to purchase Dog Beach, authorize staff to submit an application to the SLO Local Agency Formation Commission (LAFCO) to initiate detachment proceedings for a lot owned by the Cayucos Sanitary District, and approved an amendment for five lots above Panorama Drive that would add it to the city's sphere of influence.

Acquiring the property will cost the city $338,050; however, the State Coastal Conservancy is contributing $150,000 and $188,050 is coming from the Land Conservancy of SLO County. According to a staff report, the city will be responsible for payment of certain standard closing costs and related costs for submission of the various LAFCO applications.

During public comment, San Luis Obispo County 2nd District Supervisor Bruce Gibson said the city is on the threshold of a really important step toward completing a remarkable project.

"There are so many important assets that are ready to be protected as we pursue a shared conservation vision. I mean, just think about it, we have a chance to put more than a mile of the California Coast into public ownership, and I think this opportunity is extraordinary," Gibson said. "Within that mile, we have, of course, one of the jewels of the North Coast, which is Dog Beach. The county is proud to own about half of the northern mountains, and we've been working in close partnership with the city to make sure that we come up with a coordinated management plan that keeps the uses of the beach going as they have." Δ