After you're done frying up that Twinkie

The next time you find your fuel gauge approaching empty, instead of heading straight for the nearest gas station to pay 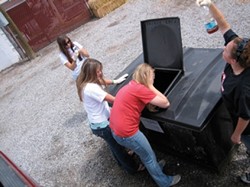 # $3.20 per gallon of fuel, consider stopping by your neighborhood Chinese food restaurant for a couple of gallons of waste vegetable oil. It may sound improbable--absurd even--but according to the Veggie Girls (six college students and friends who recently trekked cross-country in a truck running on vegetable oil) the alternative fuel is both usable and environmentally sustainable. After all, the first diesel engine--designed by Rudolph Diesel--was fueled by peanut oil.

Aubrey Wynn, a San Luis Obispo resident currently attending Vassar, functioned as the group's ringleader. It was her idea to drive across the United States, beginning in San Luis Obispo and ending at Poughkeepsie, N.Y., where she attends college. Wynn recruited her friends: Alyssa Tennant (Stanford) and Jenny Morrill (Scripps), who attended boarding school with Wynn and Audrey Faber (Cuesta) Rachel Faber (UCSB) and Caitlyn Arigo (Cal Poly), all from San Luis Obispo. The girls began their 15-day journey on Aug. 4, which would have them winding their way through Los Angeles, Arizona, New Mexico, Colorado, Kansas, Ohio, and elsewhere.

Despite the environmental statement made by their undertaking, not all of the Veggie Girls would classify themselves as lifelong environmentalists. Tennant recalls being impressed when her high school teacher converted two of her vehicles to run on waste vegetable oil, but she didn't plan to follow her teacher down the path of environmentally sustainable fuels. It wasn't until she began taking energy and environmental classes at Stanford that she seriously began to consider the severity of the nation's dependency on oil. A cross-country road trip with her friends sounded fun, but Tennant was also focused on the trip's greater implications.

"The main issue is that we're so dependant on oil from such an unstable part of the globe," she explained. "Also, we have no idea how much oil they have and if they can keep up with our consumption."

Tennant is quick to point out that waste vegetable oil is not a stand-alone solution to the problem. There aren't enough crops to produce an adequate supply of vegetable oil to meet America's fuel demands. But it is one small segment of a greater solution. Each year, the United States produces more than 11 billion liters of waste vegetable oil, enough to counteract nearly 1 percent of the nation's entire annual oil consumption.

"It's something cool that an individual can to do to reduce their emissions, but it's not something everyone can do," Tennant said.

To cover the costs of the kit and installation, which Tennant estimates at around $3,000, the Veggie Girls found sponsors. They ultimately found more than a dozen donors, from individuals and families to businesses like San Luis Trust Bank, Green Car Journal, and M:OME Architecture and Design.

Locating and treating waste vegetable oil is, admittedly, less convenient than visiting a gas station. However, it's also less expensive. Before their trip, the Veggie Girls received a tip that Asian restaurants typically have a better quality vegetable oil than do other restaurants due to the fact that they use the oil only once before tossing it out, making it less "dirty." While on the road, the six adventurers used their phone book and GPS to locate restaurants that might allow them to poke through their storage bins. They avoided chain restaurants due to the bureaucratic hazards of obtaining permission to use their oil, and found that many restaurants were very accommodating. A lot of businesses hire waste companies to dispose of the vegetable oil, so the girls were essentially saving them money.

"It took us awhile to get used to the process," Tennant admitted. "You have to be sure that it is pure vegetable oil and it doesn't have any shortening."

After locating the oil--and ensuring it was shortening-free--they had to heat and filter it. The result is energy, and the power found in a unit of vegetable oil basically matches that contained in a unit of gasoline. Tennant estimates that the girls averaged 14.5 miles per gallon during the trip, which is what the truck would normally average if it were running on gasoline.

During their first presentation since the trip's conclusion in New York on Aug. 18, five of the six Veggie Girls will speak about their experience and the significance of alternative fuels on Nov. 17 at Cuesta College. They also plan to address the distinction between biodiesel and vegetable oil, which sometimes confuses people.

Tennant has not yet declared her major at Stanford, but thanks to the trip, she's seriously considering a focus on energy science and technology major. She's also involved with Stanford Students for Sustainability and the Green Living Council. And while it's unlikely that she will single handedly stop global warming and national dependence on foreign oil, it's safe to say that her efforts--along with those of her friends--are necessary steps along a long path to a healthier world.

INFOBOX: Miles to go before they sleep

The Veggie Girls--Caitlyn Arigo, Audrey Faber, Rachel Faber, Jenny Morrill, Alyssa Tennant, and Aubrey Wynn--will be giving a presentation about their cross-country trip in a vehicle fueled by waste vegetable oil on Nov. 17 from 7 to 9 p.m. at Cuesta College's science forum, room 2401. For more information, e-mail info@institutefordiscovery.org or call 709-0579. For more details about the Veggie Girls' trip, visit veggiegirls.livejournal.com.