The residents of a city of Arroyo Grande-owned property are safe from eviction and any drastic increases in rent for another year. 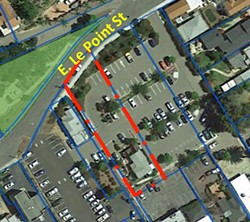 At its meeting on Jan. 28, Arroyo Grande City Council voted to approve a year lease with the longtime residents of an 800-square-foot residence at 202 East Le Point Street, a property surrounded by a parking lot the city purchased in December 2016. Via the recently approved lease, rent for the property will be raised from $1,200 a month to $1,320 in March, a rate that Mayor Caren Ray Russom isn't happy with.

"I believe this is woefully under market and needs to be revisited," Russom said at the Jan. 28 meeting. "And I continue to hold my objection that we have not approached reauthorizing this lease to reflect market value."

Later Russom said the rental is so discounted that she believes "it amounts to a gift of public funds." She suggested the city enter a month-to-month lease with the property's owners and consider opening it up for applications to other residents who might be willing to pay a fairer price.

The idea wasn't popular among most other council members, who said they weren't comfortable with taking action that could displace the current tenants. Council members described the tenants as being good renters who "aren't high maintenance" and have happily lived in the house for years.

Council members and city staff also noted the property's "extenuating circumstances," including the fact that it lacks a yard and is instead surrounded by a busy parking lot. Public Works Director Bill Robenson also said the house was built in the 1940s, and many of its features inside and out are "quite original"—meaning, in need of some updates.

Still, he said even taking those factors into consideration, the city estimates market rate for the property to sit around $1,500 to $1,600 a month.

But most council members said they were against raising the rent any higher.

"I'm not sure how much time and effort we want to pay city staff to get into the business of a rental," Councilmember Keith Storton said at the meeting. "I don't know how often we're going to have people coming in and out, and that's time, staff energy, and money that can be used in better places."