In the debate over how to bring the overpumped Paso Robles Groundwater Basin back into sustainability, two diverging paths have emerged. 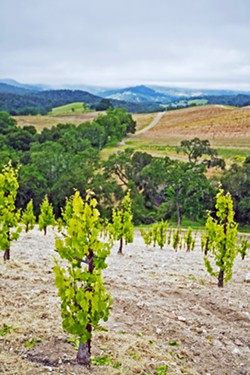 There are locals and officials who'd like to see policies that force the North County wine and agricultural industries to reduce their groundwater pumping. And there are others who say those cutbacks would be economically disastrous and should only serve as a last resort, preferring solutions like securing supplemental water.

With these big decisions on the horizon, local ag groups recently commissioned a study that set out to measure just how impactful basinwide cutbacks would be on the ag industry, and broader economy.

In a worst-case scenario of cutbacks, the authors concluded that SLO County could lose as much as 53 percent of the entire economic output of its wine industry, valued at $860 million. Estimated job losses in the agricultural sector range from 459 to 1,289, and they grow to between 1,358 to 3,351 when factoring in the entire wine industry.

Hamilton and McCollough explain in the study that they used an "integrated economic modeling software" to measure the impact of the theoretical water restrictions. The high price of cutbacks, authors say, show just how much the North County economy is "heavily dependent on irrigated agriculture." Cutbacks appear to cause major economic ripple effects in the region.

"Because agriculture is so varied in the [basin], every producer would lose income, and all agricultural input suppliers and service providers would lose sales, which would cause reduced spending throughout the economy," the authors write in the study. "The economic implications of water reductions are sizable and would cause a restructuring of the local business environment."

With policy makers about to decide which strategies to pursue for basin sustainability, farmers like Matt Turrentine, of Grapevine Capital Partners, hope the study results are sobering.

Turrentine, who represents the ag industry on the four-member Paso Basin Cooperative Committee—which is charged with balancing the basin—told New Times that the study highlights "how important it is to continue to look for other constructive solutions beyond just cutbacks."

He said he wants to first prioritize other strategies—like deploying recycled wastewater from the city of Paso Robles to the basin, setting up a voluntary fallowing program, and adopting best groundwater management practices for farming.

"There very well may need to be some cutbacks, but this study should underscore for everyone that we need to exhaust all other possibilities first," Turrentine said. "The wine industry and the grape growing community have a profoundly positive economic impact on the county, and this illustrates how even what seems like a relatively minor level of cutbacks in extractions of groundwater can dampen that economic impact. With Diablo closing and the COVID pandemic, the last thing we need right now is a further damper on the economy."

• El Camino Homeless Organization (ECHO) Paso Robles announced on Feb. 3 that it is now providing a daily meal service at its new shelter on 1134 Black Oak Drive in Paso Robles. This ECHO-managed food service replaces the daily meals provided previously by Paso Cares at the corner of Riverside and 24th streets. According to an ECHO Paso Robles press release, individuals and families facing hunger and homelessness can now receive a to-go style meal in the newly created food service area of the facility.

• Feb. 23 is World Spay Day, and to commemorate it Woods Humane Society is asking for help with Project MEOW, a fund that helps it pay to spay, neuter, and vaccinate un-owned community cats. The nonprofit is hoping to raise enough money to treat 1,000 homeless cats this year. Δ