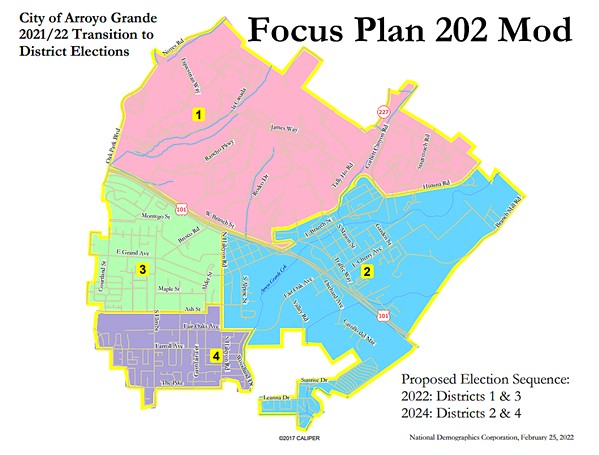 The City Council chose a modified version of the map called Plan 202. They favored it because it kept the Arroyo Grande Village intact, featured the Highway 101 "corridor" as a "really good delineator," and had easily identifiable boundaries overall.

Unlike its neighboring city of Grover Beach, Arroyo Grande selected a map that was originally submitted by a member of the public. Both cities had to throw out the majority of draft maps because of delays with release of the official census data. Many community members drew draft maps based on estimated data, which significantly varied from the official numbers and made most of their submissions ineligible.

The National Demographics Corporation (NDC), the agency that assisted both cities with the districting process, devised its own set of draft maps using census data and preferences of the public. Using additional input from Arroyo Grande City Council members in February, NDC incorporated changes to Plan 202, which community members had plotted using a mapping tool called DistrictR.

The City Council further edited the map at the March meeting. But this time, council members focused on the proposed election sequence rather than district boundaries.

Originally, Districts 1 and 3 would vote on council members in 2022, and Districts 2 and 4 would vote in 2024. But Matson explained that the City Council had other plans.

"Council agreed to have Districts 1 and 4 go up for election in November 2022, and District 2 and 3 in 2024. Council expressed concerns with both 3 and 4 going up in 2022 due to the short timeframe for possible candidates in those districts to make a decision to run," Matson said. "Council also commented on the demographics in Districts 3 and statistics showing that Latinx populations are more likely to participate in presidential elections. The next one [presidential election] is in 2024, so they expressed support for having District 3 go in 2024 for possible higher voter turnout."

Plan 202 passed in a 4-1 vote, with Russom dissenting in favor of Plan 903. Members of the public can voice their opinions at the ordinance introduction on March 22 and at the ordinance hearing on April 12, where the selected blueprint will be adopted. Written comments can be submitted to publiccomment@arroyogrande.org. Δ