AG City Council pushes its own pay increase back to 2022

Current members of Arroyo Grande's City Council might not get that 60 percent raise after all.

After a second discussion regarding a proposed pay increase for its members and mayor at a meeting on Nov. 26, the City Council walked back support for putting the raise into effect on Dec. 1, 2020, and instead voted to push the effective date back to 2022. 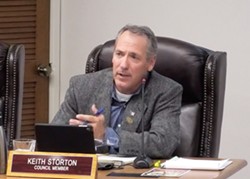 With two council members dead set against the 2020 effective date and two others for it, the decision largely hinged on Councilmember Keith Storton, who initially supported putting the raise into effect in 2020 but wavered at the council's most recent meeting.

"I'm feeling that I really struggled with the decision, and I had so much heartache after I left with that decision," Storton said at the meeting. "I didn't feel comfortable when I left that I made the appropriate decision for me. And so tonight I can't support the ordinance as written with the raise coming in 2020."

A 60 percent spike, which was suggested by city staff, would bring the monthly pay for each Arroyo Grande council member up to $648.

Despite community opposition to the raise and a spirited debate between council members, City Council voted 3-2 on Nov. 12 to direct staff to create an ordinance that would raise compensation for its members in 2020.

But with Storton's change of mind on Nov. 26, the council decided to amend the ordinance so that the raise would go into effect in 2022, when the current council members are more likely to be finished serving. Although Mayor Russom tried to fight for a nominally larger raise in 2022, other council members shot the idea down.

Councilmember Lan George, who was the first to suggest pushing the ordinance's effective date back to 2022, said she wasn't comfortable increasing compensation any more than already proposed.

"I definitely don't want to bring this item back because I want to talk about other things," George said. "We have a lot of big issues that I want to get moving on so I don't want to constantly be spending council time discussing this."

City Council voted 4-1 to support the 2022 amendment, with only Councilmember Jimmy Paulding, who said he wouldn't support a pay increase of any kind, dissenting. Δ