Aged and addicted: Senior drug and alcohol abuse on the Central Coast

At around 10:30 a.m. in a small room at the SLO County Veterans Memorial Building, Colin Quennell was telling a story.

The story was a personal one. Quennell, a licensed therapist and program supervisor for the SLO County Health Agency's Drug and Alcohol Services Department, was talking about an elderly family member who fell on difficult times. He'd lost his spouse, and soon after, had to put his dog down as well. It wasn't long, Quennell said, until the family member turned to alcohol to cope.

"At the age of 82, he just decided to drink himself to death," Quennell said.

The story, which Quennell told in August as part of a presentation to the SLO County Commission on Aging, did have a happy ending. He said the family member eventually decided to get sober. Quennell used the example to illustrate an important aspect about alcohol and drug abuse.

"There's no age limit for a person starting out getting clean and sober," he said.

The types of people who suffer from substance abuse span far beyond the preconceived stereotypes of addicts gleaned from movies and television. In reality, it impacts individuals from a wide spectrum of family backgrounds, race, sex, and socioeconomic status. The same applies to age. In SLO and Santa Barbara counties, and even across the United States, seniors are struggling with substance abuse; some are longtime addicts who've been battling substance abuse for years, while others didn't begin their battle with addiction until far later in life, turning to drugs and alcohol to combat loneliness, economic insecurity, or myriad other difficulties that come with aging.

Being a senior with a substance abuse problem comes with its own unique challenges and dangers. Addiction's negative impacts on seniors' health and well-being can be greatly exacerbated, and little research has been done on how best to treat that specific population. Still, the issue is unlikely to go away as the aging population grows and becomes increasingly populated by a generation whose attitudes about drug use are much different than the one before them.

Individuals older than 65 who seek treatment for substance abuse issues through Santa Barbara County's Alcohol and Drug Program are few and far between, according to Program Manager John Doyel. One major reason for that, he says, is that many individuals battling long-term addiction die before they reach that age.

"Many of the clients we work with are dealing with moderate to severe drug abuse or alcoholism," he told New Times. "If they are homeless and have been dealing with an untreated addiction, they usually die in their early to mid-50s. Most of our clients range between their mid-20s to around 40 years old."

The picture appears to be similar in SLO County. In his presentation to the commission, Quennell said that just 43 out of the "several thousand" clients who sought treatment through the county from January through August of 2018 were classified as seniors. According to the National Council on Alcoholism and Drug Dependence (NCADD), a nonprofit education and advocacy group, there are an estimated 2.5 million older adults living with alcohol or drug problems in the United States. That number is just 12.5 percent of the more than 20.1 million Americans who reported having a substance use disorder according to the most recent available data from the National Survey on Drug Use and Health.

While they may not make up the majority of the country's addicted population, the negative health effects of substance abuse on the senior population can be particularly devastating. The general physical effects of alcohol and drugs are debilitating for the elderly, and that's on top of increased risks for harmful interactions with any medications they may be taking for medical conditions.

"You become more sensitive to [alcohol and drugs] as you get older," Quennell said. "It can make health conditions worse."

Substance abuse can also increase both the risk and severity of alcohol and drug related injuries according to Nancy Gottlieb, clinical director for the Santa Barbara branch of the Council on Alcoholism and Drug Abuse, which serves all of the Central Coast.

"[Being intoxicated] already puts you at risk for falling, and add to that the equilibrium or mobility problems, or bone loss that can come with aging, " she told New Times. "For [seniors] falling and breaking a hip can be fatal."

According to the NCADD, anywhere from 6 to 11 percent of elderly hospital admissions, and 14 percent of emergency room admissions for elderly patients, were the result of alcohol and drug problems.

Not only are older individuals likely to experience the negative effects of addiction more severely, but the mental, physical, and lifestyle changes of advanced aging could cause some of them to turn to heavy drug and alcohol use as a solution. According to Gottlieb, those changes can be as innocuous as transitioning from the working world to retirement.

"They've been very busy for a long time, then all of a sudden, they are not busy anymore," she said. "So you might have a situation where someone was a heavy drinker but were functional because they had to go to work every day, then they retire and they don't have that anymore."

Recent research has raised concerns about an "epidemic of loneliness" among America's seniors. A September 2018 survey released by the AARP foundation found that an estimated 35 percent of adults aged 45 and older are lonely. Santa Barbara County Drug Program Manager Doyel said that feelings of loneliness or social isolation might cause some seniors to turn to drugs or alcohol.

"If someone loses their spouse, they are more prone to depression, they could be at a higher risk for developing problems with drinking or substance abuse," he said.

In addition to psychological factors, the physical impact of aging, particularly chronic pain, also puts older Americans at risk for abusing prescription drugs such as opioids. According to NCADD, while adults older than 65 make up just 13 percent of the population, they account for nearly 30 percent of all medication prescribed in the country.

"What you are looking at is a population that is taking a lot more medications," Quennell said in his August presentation to the SLO County Commission on Aging. "As you begin to experience certain medical conditions, these medications may be the only thing you have."

While the number of seniors seeking treatment for drug and alcohol abuse on the Central Coast may be low now, there is a possibility that the number could rapidly increase in the coming years as the more than 63 million members of America's baby boomer generation continue to age into the senior population. 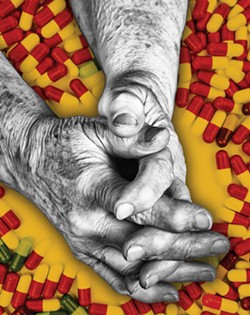 Born between 1946 and 1964, aging boomers are expected to fuel a predicted swell in the U.S.'s senior population over the next 15 years. According to projections from the U.S. Census Bureau, boomers will be 65 or older by 2030, meaning 1 in 5 Americans will be retirement age. By 2035, the population that's 65 and older is expected to be an estimated 78 million people. That growth will also necessitate the increase and expansion of a range of support and services across various sectors, including housing, health care, and addiction treatment.

It's not just the sheer increase in numbers that will have an impact, but the generation's cultural attitudes toward drug use, according to Quennell. Many boomers were adolescents or teenagers in the 1960s and 1970s when youth culture's attitudes about drug use and experimentation became more relaxed and liberalized compared to the generations that came before them.

"The baby boomer generation has completely changed things," Quennell said. "[They're] coming into this senior world with more of a willingness to try drugs and other substances."

That willingness will likely contribute to an increased use of illicit drugs by the aging population. A 2005 peer-reviewed study published in the Annals of Epidemiology predicted that illicit drug use by Americans older than 50 would increase from 1.6 million people in 1999 to 3.5 million people by 2020.

Despite the looming boomer wave and current acknowledgement by addiction advocates of the unique challenges surrounding the issue of senior alcohol and drug abuse, attempts to address them appear to be few and far between. Organizations like NCADD are concerned about the situation.

"Alcohol and drug problems, particularly prescription drug abuse, among older adults is one of the fastest growing health problems facing the country," the organization's website claims. "Yet, our awareness, understanding, and response to this health care problem is inadequate."

Locally, neither SLO nor Santa Barbara counties' drug and alcohol agencies have treatment or programs geared specifically to seniors. The few who do seek treatment through the two counties' respective programs would receive the same treatment as any other addict of a younger age. During his presentation to the commission in SLO County, Quennell noted that there was no widely accepted senior protocol that was evidence-based. If such a protocol was available to counties like SLO and Santa Barbara, as well as other nongovernmental treatment organizations, it could provide a framework for a program specifically tailored to the needs of seniors.

"There's no specialized treatment program," he told the commission. "The kinds of services we would have for them would be the same for everybody."

Still, Gottlieb from the Council on Alcoholism and Drug Abuse said that there were some changes that could help improve support and treatment for seniors addicted to or recovering from drug and alcohol addiction. One of those is encouraging primary care physicians to implement a special substance abuse screening protocol with their elderly patients. Known as Screening, Brief Intervention, and Referral to Treatment, the protocol provides doctors with a series of questions they can ask and, based on their age, sex, and responses, determine whether patients are suffering from a substance abuse disorder or at risk for developing one.

Gottlieb said the protocol works for patients of all ages, but said it could be particularly beneficial for seniors, who see their primary care doctors often and may not seek out substance abuse treatment on their own out of fear of being stigmatized.

"There's a big percentage of people who will answer honestly and get help if you just ask," she said. "So there's been a real push to get primary care physicians to ask these kinds of questions."

Gottlieb also said there should be more drug- and alcohol-free housing for sober seniors.

"Many senior communities and assisted living homes have events with alcohol, like wine tasting, or offer alcohol with meals ... and I've had clients in recovery who don't want to move to places like that because their worried [about relapsing]," she said.

It's not just doctors and institutions that can do more to help. Gottlieb said that it was important for recovering seniors to receive support from family, friends, the local community, and other social support systems to help them build and maintain a sober lifestyle.

In the end, while advocates, physicians, treatment specialists, and researchers continue to study the complex issue of senior substance abuse and seek answers, at least part of the battle may simply be bringing the little-discussed issue to the attention of the wider public, broadening and challenging common perceptions about who suffers from addiction and why.

"It is so important to let the public know that substance abuse occurs and touches almost everyone in some way or another," Gottlieb said.

Indications that a senior may be struggling with an addiction to drugs or alcohol may include:

• Loss of interest in hobbies or pleasurable activities

• Drinking in spite of warning labels on prescription drugs

• Immediate and frequent use of tranquilizers

Information Courtesy of the National Council on Alcoholism and Drug Dependence. ∆