You know how rock journalists are always calling a band “infectious” because they’re so immediately accessible? Well, usually that term is so much hyperbole, but in the case of Great Big Sea, it’s not. The Americana act is truly infectious, delivering one hooky gem after another on their new album Safe Upon the Shore.

The platinum-selling Canadians (still North America, so technically Americana!) are currently celebrating their 18th year as a band, and they seem to be getting better and better. They move effortlessly from sea shanties to Celtic ballads to swampy bayou tunes to New Orleans brass chargers to delicate folk lullabies. Despite hailing from Newfoundland, Great Big Sea sounds like an American Heartland band.

It’s a week of familiar faces—or shall I say old favorites?—at SLO Brew.

Kick your St. Paddy’s Day off with Still Time, which plays a free show on Thursday, March 17 (8 p.m.; 21-and-older; free!). Fans of Ben Harper love these guys, a homegrown act that formed at Cal Poly and has since toured the nation.

Former pugilist and current southern raconteur Paul Thorn returns to the club on Saturday, March 19 (7:30 p.m.; 21-and-older; $16 presale or $18 at the door). His most recent release, Pimps & Preachers, gave Thorn his first Billboard Top 100 debut and remained in the top five on the Americana Radio Airplay Chart for 10 weeks. Said his press materials, “The cover depicts a teeming street scene, at the unlikely intersection of Redemption Lane and Turn Out Blvd. Two figures dominate: a pimp and a preacher, both dressed to the nines beneath broad-brimmed hats, surrounded by hookers, holy rollers and hangers-on—all on their paths to salvation or perdition. Nearly lost in this tumult is a small boy, banging a tambourine branded with the name of Jesus but backed up against a streetwalker holding a fistful of greenbacks. ‘That little boy represents me,’ says Thorn. ‘I’m in the church group but my eyes are looking back to the street where all the sin is going on. It shows me being intrigued by the broad world. That’s why I made this my album cover: It describes who I am.’”

On Sunday, March 20, guitar great Coco Montoya brings his blistering blues rock to the Brew (6:30 p.m.; 21-and –older; $15 presale or $17 at the door). Though he got his start as a drummer, he’s turned into an amazing guitarist after stints with Albert Collins and John Mayall.

Then on Wednesday, March 23, punk/rock/alt act Senses Fail hits the stage (7 p.m.; all ages; $14 presale or $17 at the door). Dance Gavin Dance, Sky Eats Airplane, and Foxy Shazam will open this evening of rock from the edges.

And finally, I’m pretty stoked because an old favorite of mine, The Smoking Popes, has reformed and has a new album out and is hitting SLO Brew on Thursday, March 24 (7 p.m.; all ages; $12 presale or $14 at the door). The Mighty Fine opens. The Popes were unlike any other pop punk band of the era, mainly because of the arresting vocal style cultivated by Josh Caterer, who sounded like a lounge singer more than a punk, though behind him was the typical loud, guitar-driven punk sound. Once you hear them, you’ll never forget them. More on them next week, but buy your tickets today! 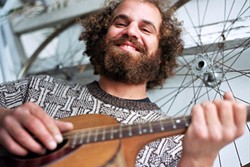 On Thursday, March 17, The Porch hosts JimBo Trout, “the leader of a high energy, good-time band from San Francisco called JimBo Trout and the Fishpeople. Backing his raw bluesy vocal on banjo and guitar, JimBo plays a musical gumbo made up of bluegrass, ragtime, blues, western-swing, Appalachian, rock’n’roll, honky-tonk, and more.” (6:30 p.m. all ages; free).

On Sunday, March 20, a touring favorite, the jazz folk artist Amy Obenski, plays Sculpterra Winery from 1 to 4 p.m. She also returns to Linnaea’s Café on Friday, March 18, at 8 p.m. She’s currently working on her fourth album: “I’m waiting for the right timing. My previous albums were done in a hurry because I felt like I needed to put out an album every two years at least. This time I’m waiting to have a full collection of songs that I am completely in love with, and I’m waiting for the musicians and recording space to come together in a more natural way. I think this approach will have a profound effect on the sound of the album. Luckily, since I’m an independent artist, I have the kind of freedom to make that choice.”

On Tuesday, March 22, indie-folk sisters The Ericksons play the Steynberg Gallery. Bethany and Jennifer play a “compelling style of indie-folk music [that] is rich with sounds from acoustic guitars and banjo that bring to life the duo’s stunning vocal harmonies,” said event organizers. “Growing up in the Midwest, the sisters developed a deep relationship with music at early ages. The Ericksons formally took shape in 2006 when Bethany and Jenny began performing at venues in and around New York City.” See them from 6:30 to 9:30 p.m. ($5).

Finally, on Thursday, March 24, at The Porch, two touring bands—Run on Sentence and Trouble in the Wind—meet up to share the featured set in Santa Margarita. “Run on Sentence is a vehicle for multi-instrumentalist and songwriter Dustin Hamman, who tours with a rotating cast of musicians from his base in Portland. Run on Sentence was featured on National Public Radio’s ‘Song of the Day.’”

All the showcases include one featured act and others playing four-song sets. They pass around a tip jar at the free events.

“Wanted to let you know that we’re getting ready for the second annual appearance of Paddy O’Jar on St. Patrick’s Day, Thursday, March 17,” said Patrick Hayes, usually of Pennyjar. “I’m pretty sure that Paddy O’Jar is SLO’s only folky-punky-Irish rock band. Along with some Irish-flavored (that flavor being whiskey, I think) originals, we cover songs by the Pogues, the Clancy Brothers, Great Big Sea, the Young Dubliners, Dropkick Murphys, and a few others. It was a hell of a show last year, and we expect it to be even better this time ’round. The plan right now is to do three shows at the Frog and Peach. The first one will be at midnight on Wed./Thurs. to kick off St. Patrick’s Day. Then as soon as Frog opens up in the morning, we’ll do sets at 6 a.m. and 8 a.m. If we are capable of standing after that, we’ll be wandering around town playing street busking shows for the masses.”

If, on the other hand, you’re in the mood for some real Irish: Seamus Finn-Chandler is about as Irish a name as one can have, and indeed, the fair skinned—nay, near translucent—proprietor of Sustenance Cooking Studio is born and bred in the old country. He’ll be putting on a traditional Irish spread (leek and Swiss tarts, smoked salmon and new potatoes, gooseberry crumble) on Thursday, March 17, starting at 11 a.m. ($15; BYOB). In addition to great Irish food, there’ll be Irish music and plenty of camaraderie and craic! Call 543-2186 for more info. “We’re tearing it up as only the Irish can do!” Seamus said. “As the Irish say, ‘It’s the first drop that destroys you; there’s no harm at all in the last.’” 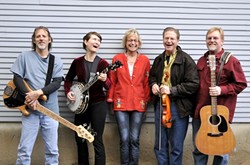 Former Paso Robles resident Mike Wright Brady, now living in SoCal, returns to the area with his band The Connection on Saturday, March 19, for the Zin Fest weekend. According to the band, they were created to spread the message of love, discovery, pain, hope, defeat, and rediscovery, and hopefully triumph. “We’re raising money for a children’s organization called Hillsides, in Pasadena,” Brady said. “It is a program that helps abandoned and abused kids. By the way, we’re filming a documentary and will have a camera crew with us for anyone that will want to be in the movie.” See them at Chronic Cellars from noon to 4 p.m. and at D’Anbino Winery from 7 to 9 p.m. ($5 cover).

The Gather Wine Bar hosts Appellation Bluegrass Band on Saturday, March 19, from 7 to 10 p.m. “We’ll be playing our traditional brand of bluegrass music—eclectic mix of traditional and newgrass with touches of blues, surf, and rock—at a venue new to us,” said the band. The show’s free.

Keith Kurczewski wrote to give me the scoop: “The Booker Tease is playing Sweet Springs next Saturday, March 19, at 9:30 p.m., $5, with everyone’s sister’s favorite pin-up band (just kidding) The Dead Volts. Why is this so important? Recently, I took a trip back to Memphis, Tennessee, stood in Stax Records Studio A, where Booker T. and the MG’s not only recorded all of their seminal songs, but also rehearsed, hung-out, and pretty much lived from 1962 though 1969. It was one of those moments that gives you the chills and humbles you at the same time. I stood in the same room, breathed the same air, drank the same water ... and got really sick. But we’re pumped from the experience and looking forward to bringing it all down at Sweet Springs. We’ll even have Shawn, Butch, and the Dead Volt boys twangin’ it biggety-Osos style. We’ve really been looking forward to playing with these gents!” 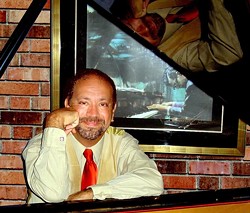 On Sunday, March 20, enjoy the good life when jazz pianist Mark Pietri brings his New York City-style jazz piano to Sustenance Cooking Studio for an afternoon of music and food. Pietri studied and performed with such jazz luminaries as Jackie McLean and Jaki Byard and is an integral part of the NYC jazz scene. He’s also a talented screenwriter, having written material for Rodney Dangerfield and Frank Gorshin, inspiring Gorshin’s Tony-award-winning one man show Say Goodnight, Gracie, a tribute to George Burns (1 to 4 p.m.; all ages; $25 includes food and music; BYOB).

Pianist Jon Mayer is the next attraction at The Famous Jazz Artist Series at the Hamlet in Cambria on Sunday, March 20. Mayer’s latest recording, Nightscape, was on the nation’s top jazz charts for months. Bassist Luther Hughes and drummer Colin Bailey will accompany him. Call 927-0567 for show times and reservations.

Get your old-school jazz on every Wednesday, including Wednesday, March 23, when a new restaurant and pub in Pismo Beach, The Famous Alley Cat, presents The Jimmy Jazz Trio every Wednesday from 7:30 to 11 p.m. Featuring well-known local musicians Jimmy Townsend on piano, Jared Bert on stand-up bass, and Lorenzo Pace on saxophone, clarinet, and flute, the trio offers their versions of jazz standards by artists such as Monk, Coltrane, Fats Waller, Miles Davis, and Dexter Gordon, as well as some original compositions. Relax in a casual setting, enjoy the food and drinks, and dig the intriguing sounds of The Jimmy Jazz Trio.

It’s more than a week away, but you’ll want to reserve your spot early for “Tapas & Tunes” with Severin Browne at Sustenance Cooking Studio on Friday, March 25. He played there a couple months ago to a standing-room-only crowd, delivering an amazing evening of songs. Often overlooked due to his much more famous brother Jackson, Severin is an amazing talent in his own right, with a real command over the audience and a huge repertoire of incredibly engaging tunes. Enjoy small plates of delicious foods from 6 to 7, with the concert at 7 p.m. Call 543-2186 to reserve your tickets now!