The incident marks one of the few times the district has come close to issuing such a violation under Rule 1001, a controversial dust mitigation regulation that was first passed in 2011. 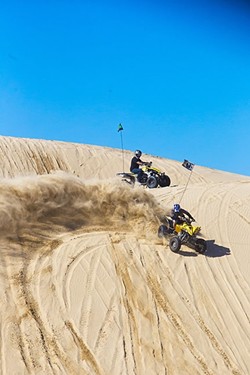 In a May 5 letter, APCD Officer Larry Allen notified state parks that it faced a possible violation because it failed to execute dust mitigation measures for the dunes' 2017 season under rule 1001. Allen told New Times that state parks was supposed to set up a total of 50 acres of wind fencing along the dunes, but installed only 20 acres of it instead. In addition, Allen said that state parks removed a dust particulate monitoring station from the dunes' Oso Flaco area in December, but failed to discuss or notify the APCD of the decision. The monitoring equipment was eventually reinstalled by state parks in March.

"These two actions in a row are just, in my mind, unconscionable," Allen said.

According to the letter, the two entities have 30 days to meet and discuss a resolution. If they can't, Allen said the APCD could issue a formal notice of the violation, paving the way for potential fines and other penalties.

"There can be a number of consequences," Allen said. "But we do have penalty authority and can require certain actions be taken within a specific time frame."

Mathew Fuzie, deputy director for state park's Off-Highway Motor Vehicle Division (OHMVD), told New Times that the department does plan to meet and confer with the APCD on the issue, noting that other agencies and permitting were involved in mitigation efforts at the dunes.

"It's not as simple as people think," he said. "It's not a black-and-white situation."

Fuzie also indicated that the department would fight back against APCD should it move to formally issue a violation.

"If they seek to issue a notice of violation, we will of course follow the appeals process," he said.

The dust-up over potential violations coincides with a lawsuit filed on May 10. Friends of the Oceano Dunes, a pro-off-highway vehicle group that's filed multiple lawsuits related to the dunes and the dust rule, sued the California Coastal Commission, alleging that the commission erred when it advised state parks that its 2017 dust mitigation measures did not require a coastal development permit.