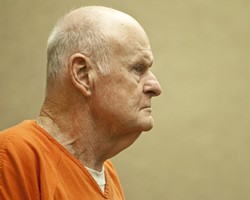 After 15 months in custody and a convoluted legal battle, former Grover Beach financier Al Moriarty agreed to a plea deal on Aug. 4 that will see him serve limited jail time but also ensure complete-as-possible restitution for his victims.

As part of the deal, Moriarty, 81, pleaded no contest to seven felonies and agreed to transfer all of his present and future assets to the court for purposes of restitution. In return, prosecutors dismissed criminal enhancements and agreed to let Moriarty serve his time in SLO County Jail instead of state prison.

Moriarty agreed to a five-year jail sentence, but his defense attorney, Jeff Stulberg, told New Times that Moriarty is unlikely to serve anywhere close to the full sentence.

Since this is Moriarty’s first offense, there’s little risk of recidivism, and he’s shown a desire for reformation, Stulberg said Moriarty likely won’t have to serve more than half his sentence. Moriarty has already accrued time served since he was incarcerated in May 2013, so he’s unlikely to spend more than a few additional months in jail.

Moriarty’s sentencing is set for Sept. 17 and, in the meantime, he’s been released from jail on an ankle monitor so he can seek medical treatment for a degenerative hip condition and other ailments Stulberg said he developed while in custody.

Though the plea deal brings an end to the criminal case against Moriarty, a federal bankruptcy case involving Moriarty in Washington is still ongoing, as are the numerous civil cases filed by his victims seeking repayment.

Stulberg said that additional aspects of Moriarty’s situation—including exactly how many assets he has left, how those assets will be allocated, and the outcome of remaining litigation—will be sorted out in coming months and years.

“This deal will enable many of Mr. Moriarty’s victims to achieve closure, and it will also hold him accountable for his actions,” Von Dohlen said.

In terms of restitution, Von Dohlen said the exact amount of assets Moriarty still possesses is yet to be determined, but added that “it isn’t much, and it isn’t anywhere near the full amount he’s going to owe for full restitution.

“Restitution will proceed in the various other cases against Mr. Moriarty on a case-by-case basis, but I think his victims are aware of the reality that his resources are pretty drained,” Von Dohlen said.

One of the most visible remnants of Moriarty’s largesse is the electronic scoreboard at Cal Poly’s football stadium, which Moriarty funded with a $625,000 donation in 2009. To this day, the scoreboard bears a large banner ad for the now-defunct Moriarty Enterprises.

University legal counsel Carlos Cordova said the university doesn’t have plans to return the donation or remove the banner ad, even in light of Moriarty’s conviction.

“After Mr. Moriarty filed for bankruptcy, his contractual ownership interest in the naming rights to the scoreboard was transferred by law to the bankruptcy trustee, who now owns those rights,” Cordova wrote in an email to New Times. “Under bankruptcy law, the university is precluded from unilaterally acting to remove Mr. Moriarty’s name from the sign.

“Cal Poly would like to reach an agreement with the bankruptcy trustee concerning the continued presence of the Moriarty name on the scoreboard, and discussions to that end are ongoing,” he continued. “We will not comment further on those discussions, as they are considered confidential settlement communications under the law.”