Al Schnupp's 'CrossRoads' is a heady homage to theater 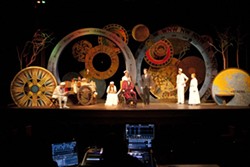 CrossRoads is, by its very definition, all over the place. An original play written, directed, and designed by Cal Poly Professor of Theatre Al Schnupp, CrossRoads is ostensibly the story of a nomadic, time-traveling outcast family. But it’s also the story of theater itself, from Sophocles to Shakespeare, and from the Commedia dell’Arte to Brecht, Becket, and Sartre.

Schnupp’s ingenious set design reflects the notion of travel, both in terms of time and geography. Two large rings, with settings like parts of an analog watch, have been planted at the center of the stage, almost touching to form a figure eight. City names—Cologne, Lisbon, Athens—can be read on one of them. This minimal set breaks up the space significantly; our outcast family must move through and around them, creating the illusion of travel. A background of cogs, compass parts, and intricate clocks further emphasizes the themes of time, and travel, and time-travel.

Into this world comes Tobias, played by Christopher Riordan. He’s a playwright, and by many accounts, not a very good one. Exiled from Athens after punching Sophocles—whose plays kept killing it at the City Dionysia, or Festival of Dionysus, as it is referred to here—Tobias and his family are forced to flee. (Humorously, Tobias’ daughter Melina, played by Jenny Nelson, cheerily comments that they are about to become “like the family in Oedipus,” which only further irritates Tobias.)

Thus, Tobias, his wife Helen (Kimberlee Vandenberg), his son Demetri (Devin O’Brien), and daughter Melina find themselves dragging a wooden cart across time and space. All four central actors turn in respectable performances, though Riordan and Vandenberg, as Tobias and Helen, have a harder time nailing their more mature characters. O’Brien, in fact, exudes a certain world-weariness as Tobias’ son that Tobias himself never quite matches. As the ages wear on, Demetri seems to become more and more restless—internalizing each century, pondering its questions—while Riordan’s Tobias progresses only incrementally beyond a state of being that could be best described as “a little bummed out.”

A trio of antagonists, played by Elias Slaman, Torin Lusebrink, and Rachel Murphy, routinely accosts the family in various forms. (They’re rather cutely named Alpha, Psi, and Omega.) It is in these three, ever-morphing antagonists that the visual imagination of writer-director Schnupp and costume designer Thomas John Bernard is truly given room to flourish. Here the three are turbaned, red-gloved creatures cooing that they will gladly share the beds of the children; there they emerge from the shadows as the Weird Sisters; elsewhere they are trenchcoat-clad silk merchants turned wagon-wheel thieves.

Lusebrink, through his sheer versatility, comes across as the ringleader of the three, able to snap between characters, accents, and acting styles with seeming effortlessness. Lusebrink does seem to favor caricature—what else does one do when one’s part consists of a series of brief, ridiculous appearances?—but one gets the impression that at least one part of him truly believes he is a beret-wearing artiste, an eccentric (imaginary?) invalid, or, in a shout-out to Italian playwright Luigi Pirandello, one of three characters in search of an author.

Presented without intermission, each of the eleven scenes is named after a road—at least one of them real (Armenia’s Silk Road); others being more of a state of mind.

CrossRoads is often quite clever in its journey through theater’s history. However, I am of two minds about the Greatest Hits approach to storytelling. I do admit to being delighted, despite myself, whenever I picked up on a reference. (“That’s from The Glass Menagerie,” I even whispered proudly to my neighbor at one point.) However, I occasionally got the impression that the plot and characters existed as mere connective tissue, bridging the gap from one of the writer-director’s favorite things to another. Even at its most sophisticated, this approach tends to feel like a contrivance. (Woody Allen did it in Midnight in Paris, which I rather guiltily adored.) The trouble is that the audience begins to sense the ways in which the plot, rather than being its own independent, unpredictable entity, has been crafted primarily to support the playwright’s mad desire to do Shakespeare, Commedia dell’Arte, and Greek tragedy. (I know: Time travel!)

The result can be a delicious, heady, have-it-all indulgence. But this approach also puts a work in danger of falling too in love with its own medium; becoming not so much about individuals as it is about its own cleverness. In the case of CrossRoads, these historical flourishes come at the cost of fully developed central characters.

But oh, such flourishes! The aforementioned Commedia dell’Arte scene has Melina and Demetri trying on masks and assuming entirely different personalities, becoming carried away in an intense dialogue that has their parents as well as the audience a little scared. Writer-director Schnupp has a knack for the uncanny, and this is one of the play’s many vignettes that could have held up entirely on its own.

In such moments there is redemption; a brief glimpse of something universal. The viewer learns precious little about the characters onstage: They are formless; mere wandering ciphers. Instead, however, one comes away with an appreciation of the ways in which a human being can be transformed by assuming the face of another. The main character in CrossRoads is not Tobias but the theater itself.