They say Paso is the next Napa. Who’s this “they,” you ask? I don’t know. It’s whoever says things like that. There are grapes and wineries aplenty ’round these parts, which is great—assuming you enjoy drinking wine. 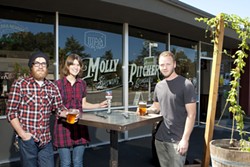 I don’t. That isn’t to say I don’t recognize the art of viticulture or the craftsmanship of winemaking. It’s just that beer speaks more to the inner child. And that is not to say New Times or yours truly in any way condones underage drinking. It means that beer is more playful than other beverages. It’s good by itself; it’s good with some grub; it’s good in every season. Maybe Kendall Bryson can sum it up better than I can: “I don’t get wine … but beer is always delicious.”

The best beers are those shared with friends in a bar that feels like your living room. No, I’m not talking about that couch you found in a back alley, I’m talking about a laid-back atmosphere where you can relax, forget about whatever is going on in the grown-up world, and appreciate some brew mastery. The Molly Pitcher in Atascadero is a new micro-brewery well on its way to establishing a loyal local following. Opened in June by Kendall and Rachel Bryson with Brian Vogel, the Molly Pitcher is the perfect place to rendezvous. Fans of the late Pour House in Paso Robles will certainly appreciate the Molly Pitcher, with its casual atmosphere—fostered by a tasteful décor of concrete, richly stained wood, and cast iron—and good people.

The concept for the Molly Pitcher budded with Kendall’s Cal Poly senior project. He did a feasibility study for a brewery and decided to see the project through to fruition. Kendall and Vogel have been making beer at home for a while, so moving to a larger-scale production excited them. They said the whole process has taught them a lot.

“I really learned the importance of supporting local businesses,” said Rachel, who handles the bookkeeping and tends bar when Kendall and Vogel are in the back overseeing the brew process.

The Molly Pitcher is the first business the trio has ever been involved in, and even though Kendall has had hardly any free time in the past few months, he said he’s loved every minute of the work.

Kendall and Vogel brew 31 gallons of beer (that’s two kegs) twice a week. They say they enjoy the science of brewing, and that it’s a lot like cooking. They’re still working out the brew-to-sale ratio, but customer response has been positive; if you run out of what you’re selling, it means the product is good. The Molly Pitcher is also host to a generous medley of guest beers, which rotate often and include many local brews.

The Molly Pitcher name originated in the Revolutionary war. “Molly Pitchers” were women who carried water to battling soldiers. One particular woman—Mary Hayes—abandoned her pitcher duties to fill in for her husband at the cannon, after he was carried off with injuries. The moniker developed into a characterization for a brave and perseverant woman. The Molly Pitcher is reaching for that same all-American spirit. And isn’t that what beer is all about anyway: bravery and perseverance?

Mosey down to the Molly Pitcher and belly up. Check out their Facebook page (facebook.com/Molly-Pitcher-Brewing-Co) for information about pint and music nights. The Molly Pitcher is at 6760 El Camino Real, in Atascadero. Hours are 2 p.m. to midnight.

Clean up to green-up! Saturday, Sept. 15, from 9 a.m. to noon is Coastal Clean Up Day. Last year, more than 1 million pounds of trash—40 percent of which was recyclable—were collected along our golden coastline. This year, organizers are encouraging volunteers to use reusable tools—like buckets and gloves—and “alternate” transportation: bike, bus, or carpool. So grab your gear, rally your friends, and head out to your favorite beach to catch some sunshine and make the world a better place.